The weather has been quite depressing for the last couple of weeks. Yesterday was no different. Since the forecast called for grey skies, all day, and since I had to work my second job that evening I decided not to bring my camera with me to work. I had some projects that I needed to work on so I brought my notebook instead. Of course when ever I don't have my camera with me some cool photo opportunity has to pop up.


This opportunity came in the form of an e-mail from the MOU list server that reported that a snowy owl had been spotted perched at Tamarack Nature Center. I had never been to Tamarack Nature Center before so I looked up directions and as soon as I finished work I ran home grabbed my gear and headed off to White Bear Lake. When I arrived there where already quite a few photographers there taking pictures of the bird. The light was terrible and the bird was not very cooperative but I was happy just to have a chance to get some snowy owl pics. 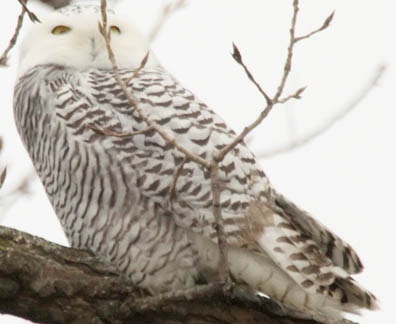 It is a pretty good bet that this bird was a female, although it is possible that this was an immature male. Male snowy owls start out barred and lose the barring becoming more white as they age. 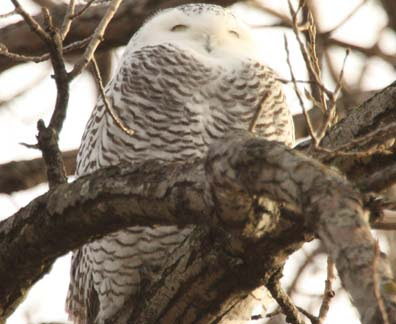 Female snowies remain barred through out their lifetime. Although it is sometimes difficult to tell the difference between immature males and both immature or mature females the immature male can often be identified by a white bib and white on the back of their head. 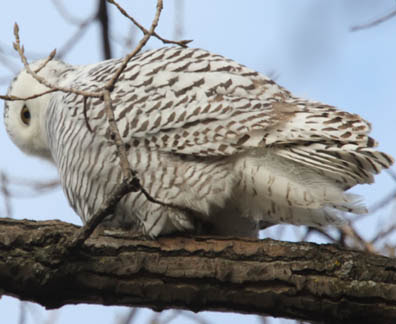 Snowy owls have gained some notoriety over the past few years thanks JK Rowling and the Harry Potter movies. In the Harry Potter series Harry has a snowy owl named Hedwig. In the movies Hedwig is played by a male snowy owl even though Hedwig is a female, coincidentally my late grandmothers name was Hedwig. 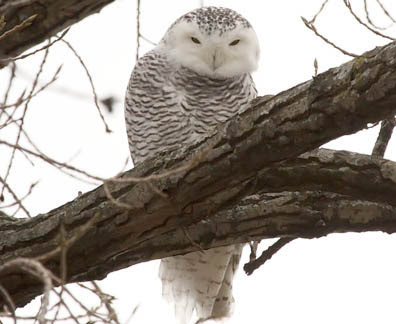 Snowy owls spend their summers up on the Arctic tundra. They nest on the ground and will fiercely defend the nest. During the winter they may or may not migrate south depending on the food source which is mainly lemmings and other rodents. When they migrate snowy owls will typically migrate into Canada, northern Europe, northern Asia, and the northern US. When their food sources are scarce they may irrupt even further south, snowies have been reported as far south as Texas. 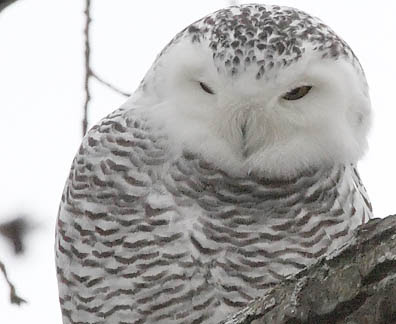 There have been predictions, earlier this year, that because of extreme draught conditions in Canada this past summer that the seed crop will be low. This may effect the rodent population, which count on seeds as a primary food source. A decline in the rodent population may force owls to migrate south and trigger an owl irruption in some of the northern states of the US. The last irruption in Minnesota was in 2004-2005 when we saw great grey owls in the thousands. Seeing a snowy this far south this early in the winter might be a fluke then again it might be a portent of what we might see this winter. 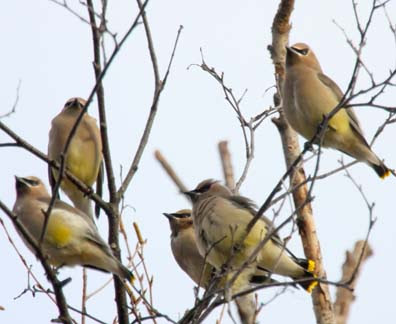 While I was shooting the snowy owl I noticed a flock of cedar waxwing in the tree above me. Since I think that waxwings look cool I decided to turn my camera on them for a few minutes while the owl was being uncooperative. 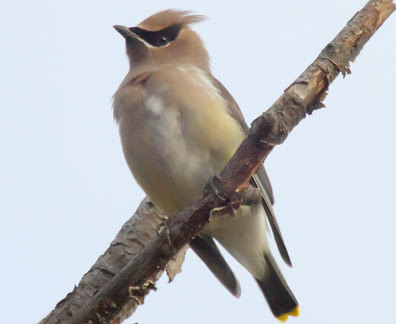 I think that they were waiting for me to get out of the way because I was standing next to some small bushes on the side of the visitors center that were loaded with orange berries. Cedar waxwings are native to North America and are predominately berry eaters. So during the winter they will migrate where ever they can find a good cache of berries.
Posted by Ecobirder at 11:28 PM

Outstanding photos! That owl has character.

I think that he was grumpy because he had a bunch of birders interupting his nap.

A Snowy was spotted in the last few weeks at Miller's Woods (an Oak Savannah Restoration Project)in Hutchinson (McLeod County) by a local physician. I wish I could have seen it!

Thanks for the great pictures!

Thank you, Jeff, for the beautiful owl images. I am an aspiring artist seeking images that I connect with in order to translate them into graphite sketches. My infatuation with owls is mysterious to me-I have no idea why I love them so much! I suppose its because they are majestic, symbolic, and in a way, otherworldly. Anyway, I'd love to share my sketches as soon as I feel they are decent enough for public scrutiny. Maybe in five years : ) Thanks again!