Minnesota is not really known as a winter haven for birders. As the temperatures get colder and the days grow shorter the number and variety of birds that we see becomes less and less. However winter does bring us some special visitors like the Bohemian waxwing. The Bohemian waxwing is a nomadic bird that lives in northern climates around the world. They will migrate into the northern United States, during winter time, in order to find berries to sustain them through the winter. In the western US they will migrate a bit further south but here in Minnesota they will only come down through about the northern most one third of the state. While I was up in Two Harbors, on November 3rd, I spotted a small flock feeding on the berries of the many mountain ash that inhabit Lighthouse Point. 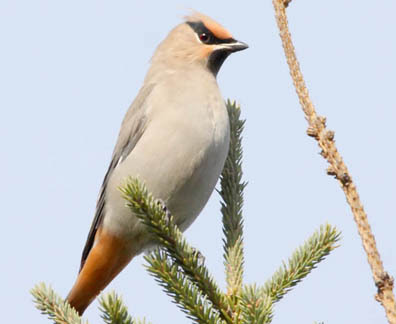 The Bohemian Waxwing is like its cousin the cedar waxwing except that it it a little bigger and has yellow and white markings on its wings and its under tail coverts are a rusty color. The Bohemian waxwing ranges in northern regions through out the world where the cedar waxwing resides only in North America. Both Bohemian and cedar waxwings have the signature red "sealing wax" looking appendages on their wings for which they are named. 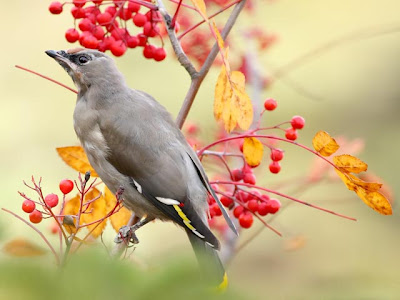 These appendages are not really wax. According to the Smithsonian National Zoological Park Migratory Bird Center they are really just flattened extensions of the feathers shaft which is colored by astaxanthin. Here is a close up on the wing of the bird above. 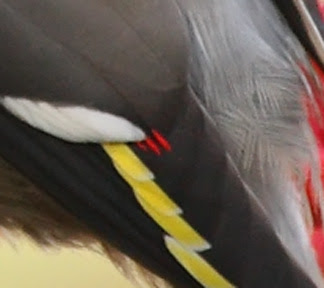 There is also a third type of waxwing that is not found at all in North America. The Japanese waxwing lives primarily in Asia. It is the size and color of the cedar waxwing but has the wing pattern that is similar to the Bohemian.
Posted by Ecobirder at 10:15 PM