Why go to Texas when Texas birds seem to be coming here.

Each year during the long Minnesota winter, Michelle and I go away for a week to some place that's a bit more warm and sunny for a vacation. I like to go places where I can see some birds that I don't get to see at home and Michelle likes to go any where that is warm, except places with a desert climate like Arizona or New Mexico. This year I went to the Bosque del Apache, in New Mexico, in January, by myself, and Michelle and I went to Monterey, Ca in February. I plan to post some pictures from these trips during the slower winter months so stay tuned.

We have begun to look at where we would like to go next year and one of the locations that we have been contemplating is south east Texas. We visited Texas back in the winter of 2004 and had a great time. There are many birds in south Texas that you just can't usually see anywhere else in the US. This is not as true this year as in years past. With in the past month 2 birds which are typically Texas natives have shown up here in Minnesota.
First one was the black-bellied whistling duck that showed up at the beginning of November here in the Twin Cities. This was not the first black-bellied whistling duck to visit Minnesota but they certainly are very rare here. I was able to get out and see it before it decided to head off to a better climate. Here is the post that I did with the pictures http://ecobirder.blogspot.com/2007/11/black-bellied-whistling-duck-at.html.
Later that same week reports came out that an Inca dove had been spotted up in Two Harbors. This was the first one recorded in Minnesota so I had to go up and see it. Here is the post that I did on the Inca dove http://ecobirder.blogspot.com/2007/11/first-ever-inca-dove-reported-in.html.
This past week the Minnesota press finally caught on about the importance of the Inca dove sitting. Minnesota Public Radio did an interview with Jim Lind who was the birder who first spotted the dove. The Minneapolis Star Tribune also did a story on the dove. However not all the press has been good, a local Twin Cities radio station 107.1 FM had their morning show, Ian and Magery, interview Sharon Stiteler, AKA birdchick. I did not hear the interview but several people that I know, who heard the interview, have made comments to me about how the hosts came off as condescending, even though Sharon did a great job at defending us birders. I guess I don't have to worry about listening to that station, I prefer to listen to the Stephanie Miller Show in the morning anyways.
Both the whistling-duck and Inca dove are fairly common in Texas and if we do decide to go there we will prolly see many of them but will not be the same. I am sure that it would sound geeky to Ian and Magery and they would prolly laugh at me, but going to see a bird, that made a miraculous trip to be the first one of it's kind to visit a new area, is kind of like getting to see a famous explorer or someone who went to the moon.
A trip to Texas this winter still would be worth it, after all we still have not seen a golden-fronted woodpecker here in Minnesota yet. 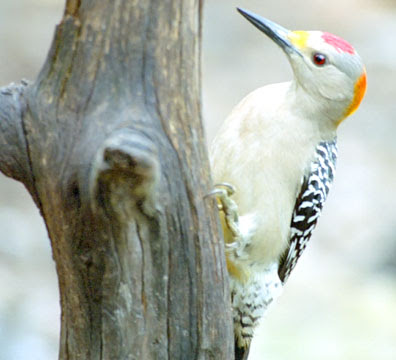 We will need to decide soon so that I can start making the reservations.
Posted by Ecobirder at 9:57 PM