Last week while I was chasing after the black-bellied whistling duck, a rare visitor to Minnesota, reports of another rare bird where flooding the MOU list server. An Inca dove had been spotted by Jim Lind up in Two Harbors, MN. This was the first Inca dove ever reported in Minnesota so most of the Minnesota birding community was very excited. I could not make the trip up to Two Harbors, which is on the north shore of Lake Superior about 20 miles north east of Duluth, during the week because of work and my volunteer responsibilities. So I planned to drive up Friday after work and stay over night.

I arrived in Two Harbors on Friday at about 4 pm. I quickly found the neighborhood where the dove had been hanging out, it was just a couple blocks north of the light house. The dove had been seen in a residential area feeding on seed under feeders between about 5 houses. Fortunately all of the yards that the dove was visiting could be viewed from an ally or the street, so that no one had to disturb any ones private property to see it. That was a good thing considering how many birders were making the trip to see the bird. I was not alone in my search there were 4 other birders also poking around.
On Friday night we spotted a dove hanging out with the neighborhood pigeons that looked like the right color and had a scaly look to it. We thought we had the birds in our sites but on closer examination we found that it was actually a very scruffy mourning dove. This mourning dove did not look like your typical mourning dove, with it's feathers all poofed out, but the tail was pointed and not square, it had markings on the wings, and it was the wrong size and had the wrong eye color so we knew that it was definitely a mourning dove and not the Inca dove. Later on one of the birder found the Inca dove in the evergreens at the house on the corner but before I could get a focus on the area it took off and went into a tall spruce tree where it were Jim believed that it had been roosting most nights. So I left and went and found a hotel to stay the night. The next morning I got up early and went down to the shore of Lake Superior, near the light house, to take some pictures of the sun as it rose over the big lake. 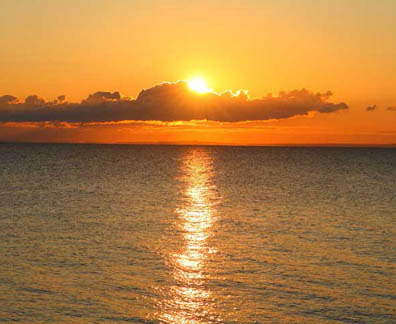 After it got light enough to shoot, shortly before 9am, I headed back to the houses which the dove had been spotted. I found the dove on the ground feeding at the corner house. 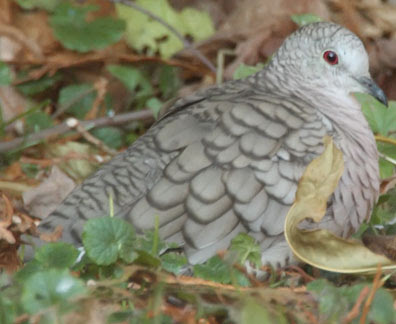 I got a few Pics before it flew back into the evergreens. I then went down to the small park over by the light house. I did some birding down there, which I will post later, and then returned back to get more pictures of the dove. This time the bird was perched in a mountain ash at the 5th house of the block which belongs to Jim Lind, the person who first spotted it. 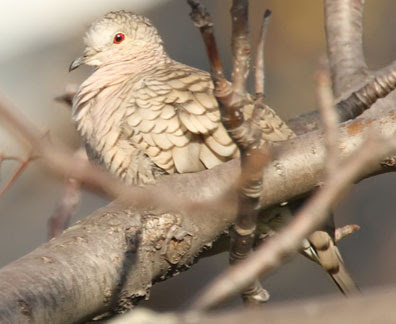 I almost missed it, another birder had told me that it was in the tree but when I got there I saw the mourning dove perched there. Actually both birds where perched in the same tree but the mourning dove was in front, with the Inca dove not as visible because it was further back, and so I thought that the other birder had made the same mistake that we had made Friday night. When I found the Inca dove further back in the tree it was easy to tell the difference between the two. 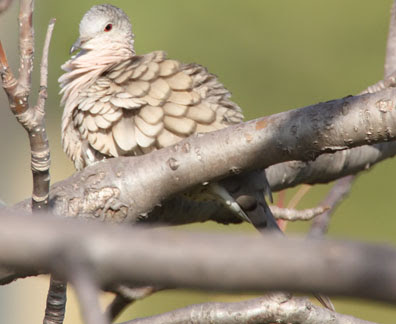 Several other birders came while it was perched in the tree and I was happy to help point out its location. Even a couple of local people, who were not birders but had seen all of us crazy birders walking around, came and asked me what was going on. 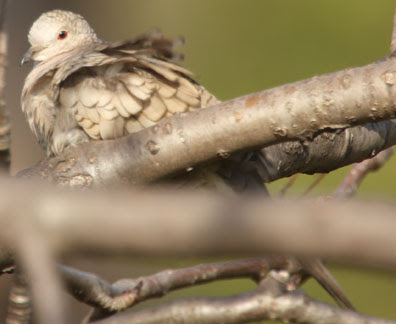 I showed them the bird and told them about how rare it was to see one in Minnesota. Even though they were not birders they were excited and talked about how they were going to tell there friends how they had seen this rare bird. 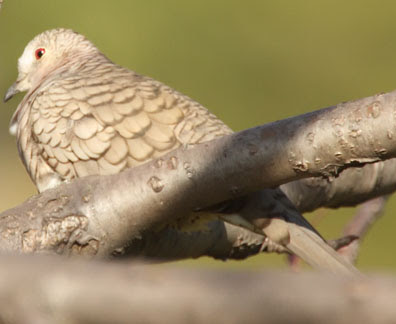 Many of the people who I were watching the bird with me had made the trek up from the Twin Cities, like I did, and most were not disappointed by the bird who was pretty good about staying in the area for over a week and cooperative about posing where we could all get good looks. After a sitting in the tree for quite a while the dove moved back down to the ground to get some more seed to eat. 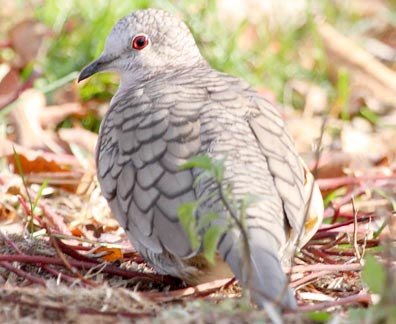 I took a couple more pics of it on the ground and then headed back down to light house point to try and find a black backed or three toed woodpecker.
Posted by Ecobirder at 10:24 PM

Thanks, I was lucky to be there on a good day and lucky that we have some great birders up in the Duluth area that made the spot and let us all know. You had some pretty nice shots of the bird over on your blog also. http://colderbythelakebirding.blogspot.com/
Hopefully we will get as lucky at the Sax Zim Festival of Birds.

An inca dove has been perching in my backyard off and on this June. I grew up in california where mourning doves are all too common. I knew this one wasn't a mourning dove right away.

I noticed it because I have been observing another species I have never seen before.