While I was photographing the trumpeter swans at Black Dog Lake on the last Saturday in January I over heard a conversation about a large group of swans on the river up north in Monticello, MN. I vaguely recalled reading some messages about swans in Monticello on the list server, so when I got home I did a little digging and found that there was a park on the River up in Monticello where they put food out for the swans. According to reports there were currently over 1000 swans that were enjoying the free meal. I was looking to go some place fresh to shoot so I decided that I would head up north the following day.

That Sunday we had good weather. The skies were clear and sunny and it was relatively warm, at least for Minnesota in late January. I got an early start and decided to head up and check out Sherburne NWR first. Michelle and I had visited Sherburne once last spring but I had never been there in the winter. Unfortunately I found that the wildlife drive was closed during the winter so I decided to give my new snow shoes, which I got for Christmas, their first real work out. I hauled my camera equipment around with me while I shoed but there was not a lot around to photograph. I did see a hawk but he took off before I could get in a good position to shoot. I also heard quite a few woodpeckers but I decided not to try and snow shoe through heavy woods to get pictures of birds that I typically shoot at feeders close to home. 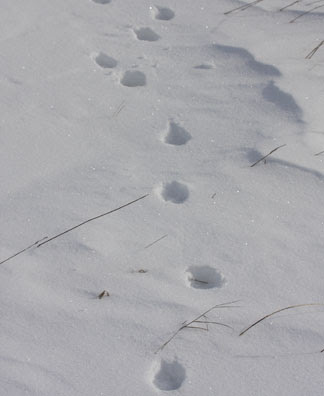 I did find some interesting tracks which I followed for a while. I believe that they were fox and I was hoping maybe to catch a glimpse of one but I am not a great tracker and lost the trail when it went into the woods. 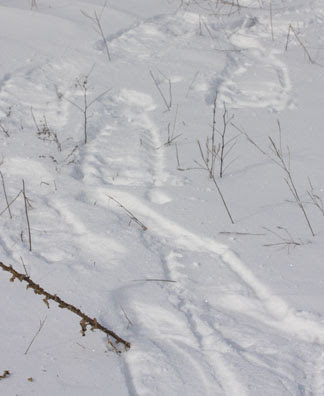 This animal's tracks were a lot easier to follow but who would ever want a picture of me. After I got some good exercise I packed up the camera and shoes and headed off to Monticello. With the help of a friendly local citizen, who struck up a conversation about my camera, I quickly found the park and the many, many trumpeter swans. 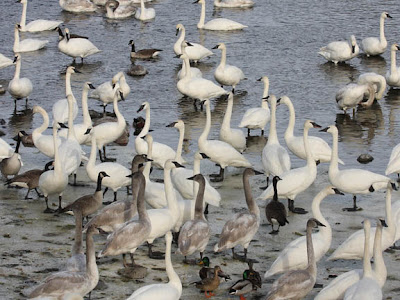 This is just a small sample of how many swans were there. There were swans on the shore, on the ice, in the river, across the river and in the air. 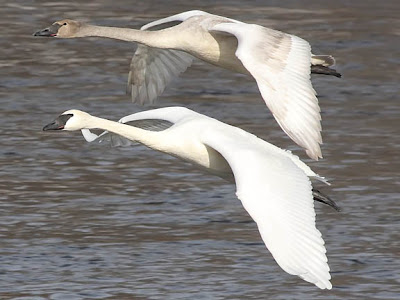 The noise of all the swans was extremely loud. I am not sure how the people living adjacent to the park could have a normal life with all of the swans around. The only other noise that was prevalant, while I was there, was the click of camera shutters as swans would fly in and land gently on the river. 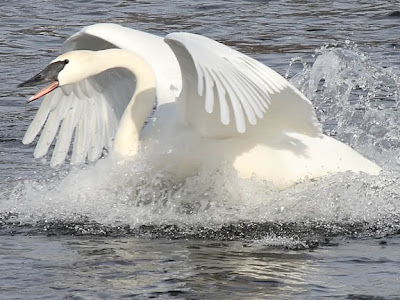 Since January is the beginning of the trumpeter swan courting season there was a lot of action going on. 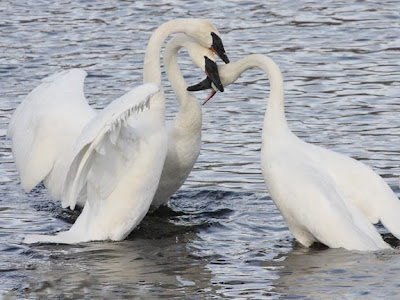 Trumpeter swans mate for life which may last 20 to 30 years. They typically begin looking for a mate when they are 2 to 3 years old. 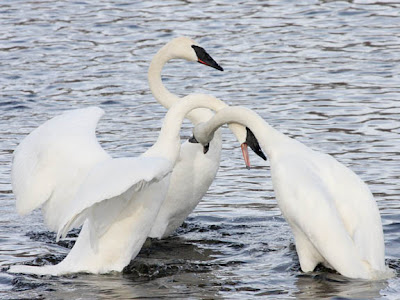 The swan's courtship begins while they are on their wintering grounds and may include head bobbing, bill dipping, synchronized swimming, trumpeting and other displays. 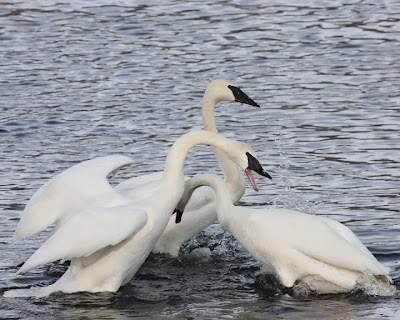 Courtship may also include posturing, biting, and fighting to chase away potential rivals. 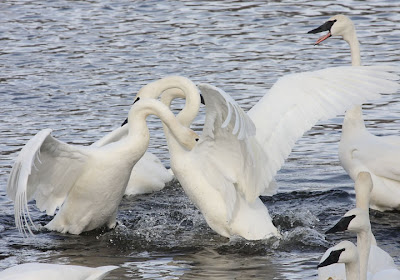 There was quite a bit of rumbling going on while I was there. 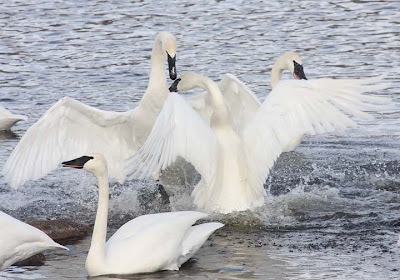 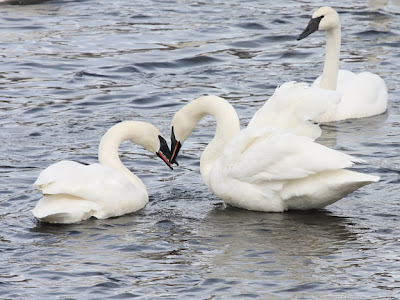 Mated pairs will typically wait 1 to 3 years after courtship before they build a nest and start a family. Nests are built on islands our muskrat houses and are usually several feet across. Eggs are usually laid in April with the cygnets hatching in May. A good place in this area to photograph trumpeter swans with their cygnets is Crex Meadows. I will be making many trips to Crex in May.
Posted by Ecobirder at 4:09 AM

Do you think the swans are still up in Monticello? What park did you go to? I didn't notice one close to the river on Google Maps (which is not saying much).

I've been meaning to ask you about Crex during the winter. What critters stick around there when things are frozen?

From the small sample shot you took of the tracks, they don't look like fox to me. (but it is a small sample)

There does appear to be direct register, but unless something really had gotten it's attention, they are far too erratic. Foxes usually walk in a straight line and there is almost no straddle (width between R&L sides of the body) and a string of tracks will look like a line - very cat-like.

Maybe it was coyote? Lots of them around too.

Cas, this is a small city park which is really only the size of a residential lot. Form the Twin Cities you head northwest on 94 until you get to Riverview Drive, this would be the first Monticello exit. Take Riverview north; just before it turns east to follow the river take a left on Mississippi Drive. The park is a block or so down Mississippi Drive, right on the river. You will see all the swans once you get close. I am not sure how long that they stay but I am guessing that they will still be there for at least 2 to 3 weeks.

Scott, winter in Crex is very hit or miss, like most of this part of the country. The things that you would be most likely to see would be winter raptor, like red-tailed and rough-legged hawks and eagles, woodpeckers, and maybe a wolf or black bear. There is a good chance that you may see nothing but snow. The good news is that the spring migration should start soon. Once the water opens up a lot of the ducks, mergansers, grebes, swans, and loons will be coming through and in March the sandhill cranes usually begin to move north. In mid April the sharp-tailed grouse begin to do their mating dance and Crex has blinds set up for viewing this spectacle. You need to reserve space in the blinds so check out their website for contact info if you are interested in this. So I guess my point is that Crex is pretty quiet during the winter but spring has all sorts of possibility.

Mike, I will take your word for it. I am not very good with tracks. I certainly would not have minded finding a coyote either. I have taken plenty of coyote pictures but never any in Minnesota.