Last Saturday I got up in the morning and planned to do some good birding unfortunately everything was pretty fogged in. So I sat around the house and waited the fog out. It took a while but in the afternoon it finally began to lighten and clear. I had read a report on the list server about a great horned owls nest located in Lakeville. Since it was too late to make any extensive bird outings I decided that I would run down and check out the nest.

Nesting time is the best time of the year to view and photograph owls. During most of the year it is hard to locate owls, since they blend in well with there surroundings and do not typically move much during the day time. During nesting time they typically stay close to the nest so it is easier to locate their perching spots. The tricky part of viewing owls during nesting, and by far the most important part, is making sure that you are not causing the birds any stress. No picture is worth stressing out the bird causing it to possibly abandon the nest.
So I headed down to Lakeville and located the nest. It was high up in a large tree that was located on a large partially wooded lot on the corner of a busy intersection. The nest was visible from the road and from the strip mall across the street. I could see the tufts of an owl barely showing from up inside the nest. 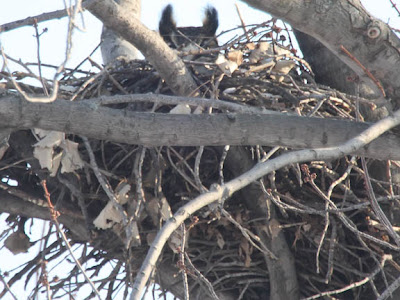 The owl did not seem to be bothered by my presence as I watched it through the camera. It seemed to be more concerned with the crows that were mobbing a bit further off in the woods. Crows will frequently mob, gather around making noise, an owl that they find. This is usually the best way to find owls during the rest of the year. At first I thought the crows were mobbing the nest but they seemed to me to be a bit far away. Then suddenly a second owl flew out of the trees and across the field. Three crows followed close behind. 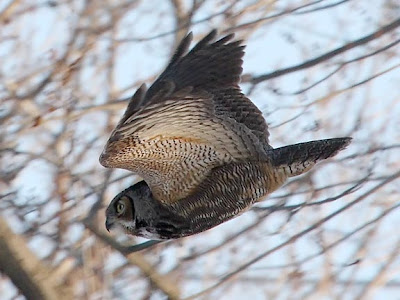 I picked up my tripod and began walking across the field and around the trees. I was thankful that I switched into my boots because the snow that I was walking through was about a foot deep. It took me a while to get around the trees so that I could try and get another glimpse. I cut a wide path not wanting to flush the bird fortunately for me, not so much for the owl, the crows kept close to him and were much easier for me to follow. I found him perched with his back towards me keeping a lazy eye on the noisy crows. 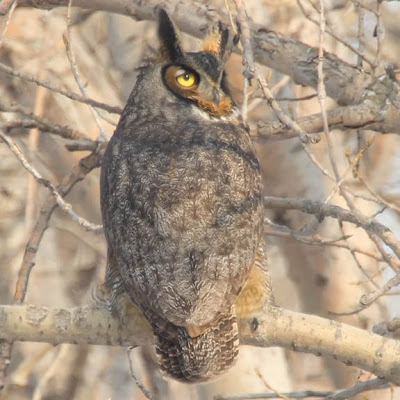 He did not stay at this location long. Crows are not really any threat to great horned owls but the racket which they make can alert other predators to their presence as well as prey, which makes if difficult to hunt. 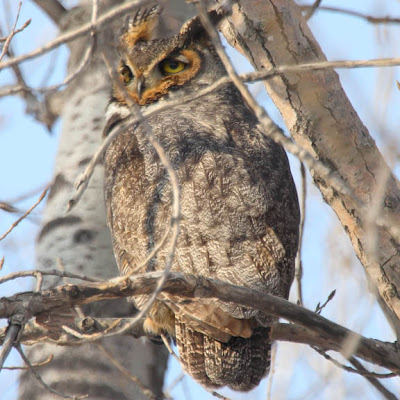 Maybe the crows just hope that all of their yapping drives the owls nuts. It is kind of reminds me of being around my family during the holidays. The crows finally decided to move on so the owl found a good perch where it could blend in and become invisible again. 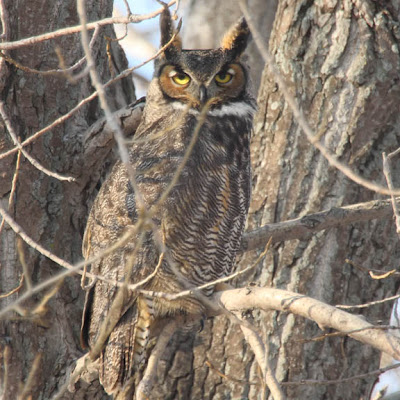 The sun was starting to get low so I decided that it was time to leave. Great horned owls are mainly crepuscular, meaning that they usually hunt at dusk and dawn. Since it would be time for the owl to hunt soon I though that it would not be good for a large human to be around to scare off any potential prey.

As I walked back to the strip mall where I had parked my truck I ran into Laura, Linda, and Susan, 3 local birders who had come down to see the nest also. I have birded with Laura before, at the Wabasha CBC, and had met Linda at the Hastings CBC so I stopped to talk to them as I was pulling out. After we talked for a few minutes and I shared some of my photos they left to walk up to the street to get a better look at the nest. I pulled out of the lot and headed down Dodd. That is when I noticed that the male GHO had moved again and was in plain site from the road. I swung the truck around, parked back in the lot and then pointed the male out to Laura, Linda and Susan. It was a good afternoon, everyone got to see both the female in the nest and the male so we all left happy.

Great Story. If you have a minute, I'd love help in identifying an owl that we saw yesterday along the Mississippi River. I have 2 (bad) photos as we were shooting across the river but hopefully, you might be able to identify him. The picture is posted at http://picasaweb.google.com/ bnwilson6624/MississippiRiverBirding

"I had read a report on the list server about a great horned owls nest located in Lakeville."

How do I get info on the listserve??

Ben, I am sorry but the picture is really to far away for me to ID the owl.

To get on the MOU listserver e-mail list just go to the Minnesota Ornithologists’ Union link in the Minnesota Birding Organizations portion of the sidebar on my blog. When you get to the MOU site there is a link on the left side bar called MOU Internet Listserver. Under the options choose Subscribe then put in your e-mail address and choose a password. Once you have subscribed you will get e-mail notification of sightings that other members send into the MOU address. If you have any other questions or need more help you can e-mail me at Tiercel63@yahoo.com.

Beautiful pictures! What a fantastic site this is!

we have a nest in our back yard and we are enjoying watching as the gho sits, moves and feeds. enjoyed your experience. sally in overland park, ks.