One of the highlights of the Sax Zim Winter Birding Festival was the feeding station on Blue Spruce Road. This feeder station, which was set up and maintained by local meadowlands resident Derek Morse, had at least 8 different feeders and always had a lot of birds around to photograph. The best day that I had here was on Friday the day that I arrived. It was sunny and cold that day and there were not many other people around. There were a lot of pine grosbeak around that morning. 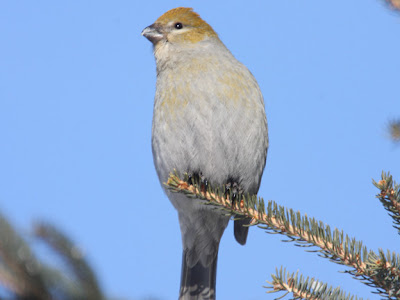 Like many types of birds grosbeaks are sexually dimorphic. According to Wikipedia the definition for sexual dimorphism is, "the systematic difference in form between individuals of different sex in the same species". 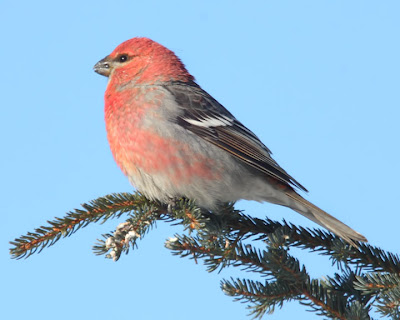 In pine grosbeaks there is an obvious color difference. The female, pictured at the top, is mostly drab gray with a bit of mustard color on the head and upper body. 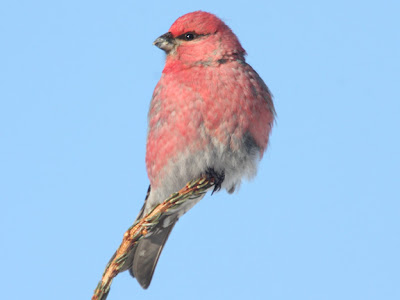 The male is much more colorful with the reddish pink head, chest and back as well as darker more distinct black and white striping on the wings. 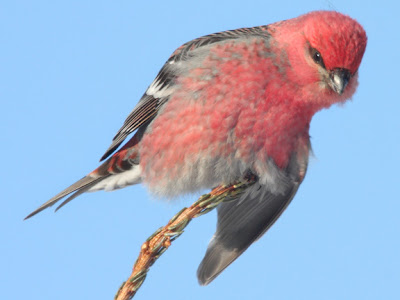 One of the reasons for the color difference may be to prevent aggression towards females by males defending territory. Many passerines are highly territorial especially during mating and nesting season. Since females typically appear closer in color to juveniles they will not usually provoke aggression. 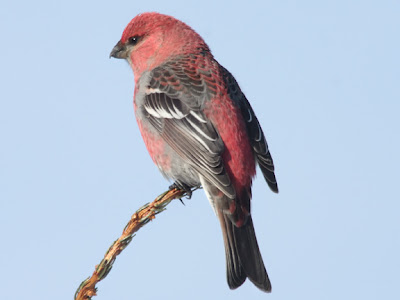 There were also some evening grosbeak that visited the feeding station. 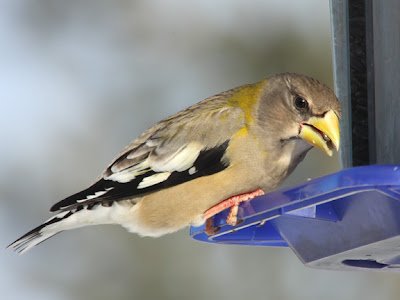 The differences in color between male and female evening grosbeak is not as obvious as it is with pine grosbeak but it is still apparent. Both male and female are primarily yellow with a darker head and wings but the female, pictured above is more of a dull yellow. 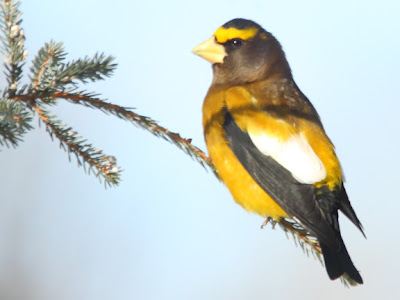 The male is much more vibrant yellow which is contrasted by a darker head. Males also tend to have more white on the secondary feathers of the wing and a bright yellow supercilium, or eye brow.
Posted by Ecobirder at 4:06 AM

Those are wonderful grosbeak pictures. Wasn't that feeding station great? I could easily have spent half a day just watching the birds right there.

I was up there yesterday and intended to leave a donation, but forgot. Anyone know his address?

The Ringhofer feeders are terrific, too, although not as extensive. They offer some good angles for photography.

Yes Ruthie that was quite the feeder station. It was even better when there were not bus loads of people there.

I checked out your shots John they are excellent, as always. I do not know the address but maybe Mike Hendricks does. His blog is colder by the Lake, just follow the link on my site. I did not really find many birds at the other stations so I concentrated on this one.

Hi!! I gave your blog an award today, check out my blog and pick up your Academy Award! Cheers