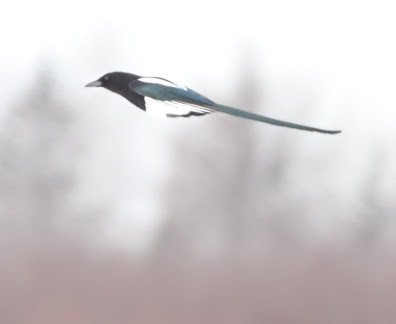 On the Friday which I arrived I also spotted a rough grouse in the middle of Blue Spruce Road. After I took a couple of pics a truck came by and spooked the bird off of the road. 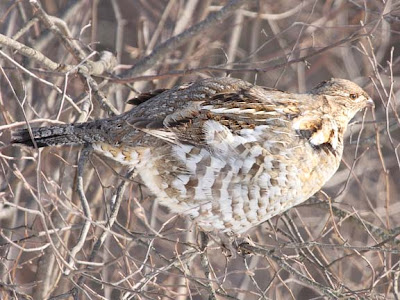 It did not go far. A few seconds after the noisy truck was gone the grouse came back out of the brush and began eating the tiny buds on the bushes lining the road. We did see more grouse on each of the field trips but it was early on both days and still a bit dark. 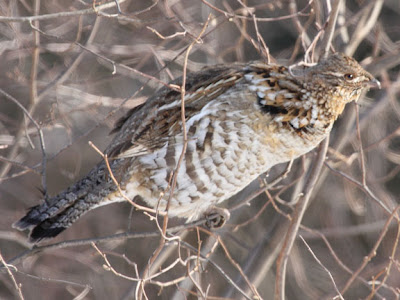 We did see one of the northern owls that make the Sax Zim Bog well known for its winter birding opportunities. A fairly reliable northern hawk owl has been hanging out on highway 7 near the Zim Sod Farm. The first time we spotted him he was on a short pole in the middle of a field. When a second bus arrived he moved to a higher vantage point in a spruce tree behind a building across from the sod farm. It was cloudy that morning and we were a ways away so the pictures were not really turning out very well. 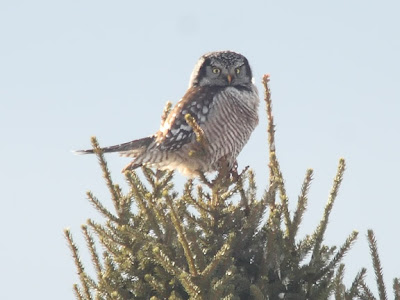 Sunday after the convention I drove over by the sod farm and located the owl in the same group of spruce. When I pulled of the road to park the owl moved from the top of the tree to a less conspicuous position on a branch about 4' from the top. I set up my camera and was waiting for the clouds to clear and give me some better light. While I waited the owl moved back to the top of the tree and when the clouds finally parted I was able to get a much better shot then I was able to take the day before. 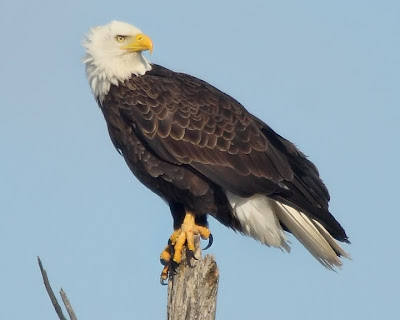 I also spotted a bald eagle on Sunday. When I first saw his large form through the trees as I was driving I thought that he might be one of the larger owns, possibly a great gray, so I pulled over and walked back along the road until I got to an advantage point where I could see around the trees. Fortunately for me he chose that moment to fly across the street and perch on a snag, which was located near the road, on my side of the street, and in perfect light. A lot of birding is a matter of luck.

This is the last of my posts on the Sax Zim Winter Birding Festival, at least for this year. The festival was a great success, thanks in large part to Mike Hendrickson, and I had a great time. I may try to get up to the Sax Zim area again one more time while the winter residents are still around, but I will need to hurry because we are starting to see some of the early signs of spring.
Posted by Ecobirder at 8:30 PM

I love the magpie shot!

That magpie photo is really nice and the eagle is drop-dead gorgeous! We see grouse up at Hasty Brook quite often but they are so hinky, I've never gotten a decent photo.

Thanks Sharon and Lynne. The Magpie was really mostly luck. I will get the release pictures up soon Lynne, I promise. I am so far behind in posting. I have the release pics plus harlequin duck, great horned owl, fox sparrow, eagles on deer carcass and I just spent the day up at Sax Zim. At least it ought to keep the blog lively.

I love love the eagle photo ...perfect light. I also am waiting for the release of the eagle photos. The Magpie shot is great..hurry post more pics... I love harlequin ducks.... hurry and post, a great horned owl too, more eagles....please ....post 'em now....sigh I await your post.

I don't think I was looking in the right place for the hawk owl. Where is the sod farm?

The sod farm is on 7 slightly south of Stone Lake Road. There is a nrsery that is also right in the same area. I was up there this weekend though and did not see the owl in the same places which I saw it during the festival. I have heard that it sometimes roost well off of the road.