On December 13th an orangutan named Markisa, from the Como Zoo in St Paul, became the 9th orangutan in captivity to give birth via caesarean. The birth took place at the University of Minnesota Veterinary Medical Center and involved Como Zoo Keepers, University Vets as well as OB-GYN staff from the University Children's Hospital Fairview.

For a little under two weeks the baby was cared for by zoo caretakers who acted as a surrogate mother by dressing in a special orangutan suit and holding the baby for 24 hours a day. On Christmas day Markisa was reunited with her baby after only 12 days. Previous orangutans who gave birth vie caesarean took 9 months or longer before they could be reunited.

I stopped at the Como Zoo, which is only a few blocks from work, during my lunch on Thursday. I was hoping to get a picture of the baby who is very cute. Unfortunately Markisa and baby where napping in a dark corner where I was not able to get any shots. 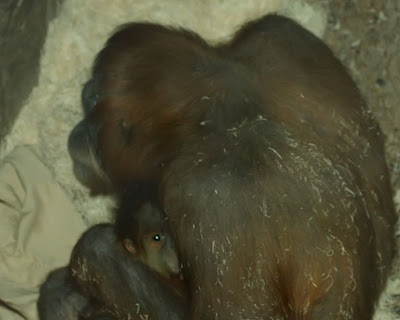 I returned after work and found that mom and baby were a little bit more visible then when I was there earlier at lunch time. I took a couple of shots, like the one above, and then waited around to see if they would move into some better light. 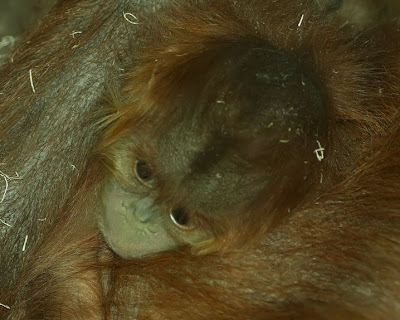 With in about 30 minutes Markisa came up close to the glass to show off her new baby. 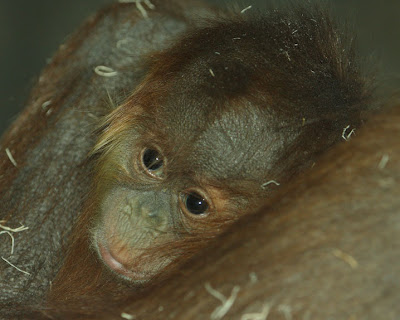 There is currently a contest to name the baby. The 3 possible choices are Jaya, which means celebration, Pandu, which means leader, or Bejo, which means luck. The name will be chosen by which name receives the most donations. To donate, and vote, you can go to the Como Zoo Visitors Center or online here. The baby's new name will be announced on Monday the 18th so you only have until this Sunday to vote. I donated money at the zoo and chose Bejo.
Posted by Ecobirder at 3:48 PM