One of these birds is not like the other, one of these birds just doesn't belong. Remember this song from Sesame Street? Usually there were 4 different objects and you had to pick the one that did not fit. In this case I have two different birds that are similar is size, shape and color. If you only got a quick glance it would be very easy for an average birder, like myself, to mistake one for the other. But these two birds are very different. 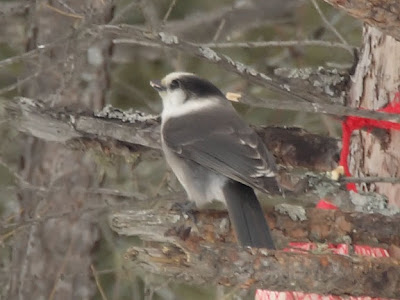 This first bird is a gray jay. They are members of the Corvidae family which includes the crows and jays. They live in boreal forests where they typically stay year round. They are able to avoid migration by storing food (berries, insects, rodents, carrion) in hidden caches. They use their sticky saliva to glue this stored food in bark crevices, typically in black or white spruce or lodgepole or jack pine. This bird and its mate, gray jays live in pairs, were spotted feeding on some carrion which had been attached to one of the trees on Admiral Road. 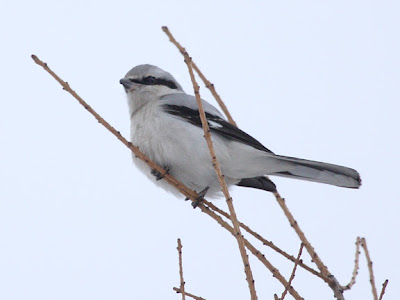 This year has been a good year for spotting northern shrikes. There seem to be a lot more in our area then usual. I saw 5 northern shrikes during the 3 days that I was up north for the festival. We spotted this shrike up on the Hedbom Logging Road. We were looking for woodpeckers but instead found this shrike who seemed to continue to move closer to where we were standing on the road. Maybe he just wanted to get a better view of the crazy birders.
Posted by Ecobirder at 4:29 AM

Very interesting comparison. My limited birding experience puts gray jays in the Bitterroots where I troutfish in the summer. And I noticed my first shrikes this fall in Fillmore County. I was inexperienced enough though to be unable to distinguish which kind I saw.
Baron (troutbirder)