This past weekend I headed up to Meadowlands, MN for the Sax Zim Winter Birding Festival. I was pretty excited because the Sax Zim Bog, in North East Minnesota, is well known, by many birders, for its rare winter migrants. This was the first year of the festival, which was organized by Mike Hendrickson, and it was a huge success. There were over 150 people who registered for the convention from 19 different states, which was twice the number that the organizers expected for the inaugural year. Mike, who I birded with at the Duluth and Two Harbors CBC and is a great bird guild if you ever need someone to take you around northeast Minnesota, did a great job planning and organizing the festival.

The main targets, for many of the birders who venture up to the Sax Zim area, are the winter owl species. I have made quite a few trips up there, over the years, searching for great grey, northern hawk, and boreal owls. Most years there are a few resident owls to find but every 4 or 5 years there is an irruption/invasion and the numbers go up. The best known example of an owl irruption/invasion was in 2004/2005 when over 5000 great gray owls were counted in the state as well as significant numbers of northern hawk and boreal owls. Even when there is not an owl irruption/invasion there are other unique species of birds. This year was not a great owl or winter finch year but it was a very good year for woodpeckers. I have read a lot of reports, on the list servers, about people spotting black-backed and three-toed woodpeckers and I have even made several trips to the Duluth and Two Harbors area to try and get some pics but so far I had not had any luck. All that I had been able to find were downy and hairy woodpeckers. 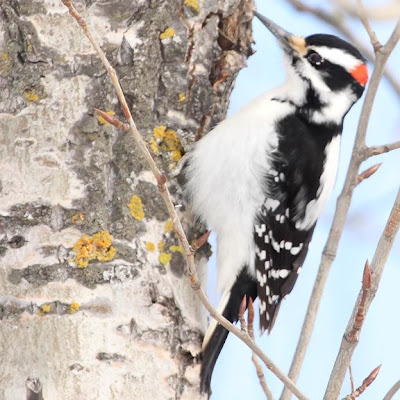 So I left early Friday morning and pulled into the Sax Zim area around 9am. The skies where clear and blue, which in Minnesota during the winter time usually means that it is pretty cold. Since the festival registration did not begin until 4pm I had about 7 hours to do some birding on my own. So I went and checked out the feeding stations that some of the local residents had set up in order to encourage birds, and thus birders, to visit. Then I headed off to the bog to check out some of the better birding spots that I have found in past years. I took a lot of pictures of many cool birds but the only woodpeckers that I found were downies or hairies. 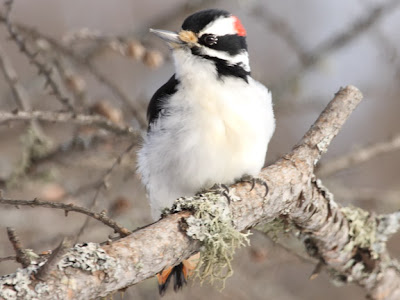 I was not worried though because I still had a couple of days of birding left and there were still quite a few sightings in the area. The next morning I was on a bus with about 30 people touring the bog in search of cool birds. That morning I got quite a few more pictures but I still had not seen a black-backed or three-toed. In the afternoon our group leaders decided to head out to the Hedbom Logging Road after talking with Kim Eckert who had lead a trip there in the morning and had spotted both types of woodpeckers. When we got out to Hedbom we got off the bus and followed a trail through the snow into the woods, I was really glad that I had decided to change into my Sorels. We went back a little ways looking for trees that had been stripped of their bark. This is the best sign that there are black-backed or three-toed woodpeckers around. After a few minutes we spotted a female black-backed wood pecker in the trees. 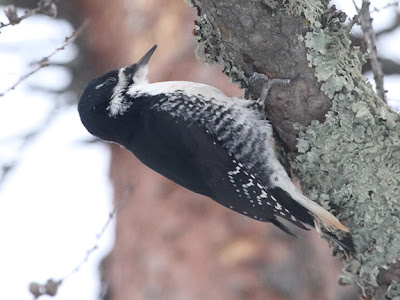 I took a couple of pics and then was heartbroken when I found that my CF card was full. I had shot through my whole 8gb card between Friday and Saturday. I deleted a couple of files that I decided that I could do with out so that I could get a couple more pics. When we got back to the bus I exchanged cards and put my spares in my pocket so that I would be ready the next time we saw a woodpecker but it was getting late and so we headed back to the community center for dinner. I decided to turn in early that night because I needed to get up early for my field trip the next morning and my hotel was 45 minutes away. The field trip on Sunday we had even better luck finding northern woodpeckers. 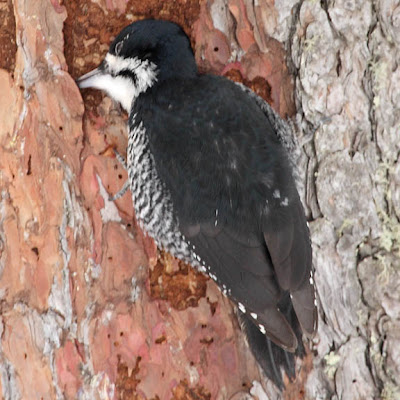 First we found this female black back down the road from the main feeding station in the meadowlands. She was really close to the road and did not seem to care that we were there. 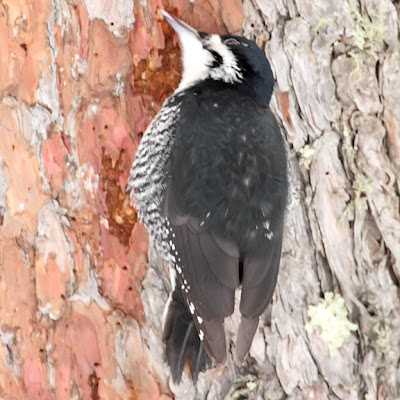 The black-backed and three-toed woodpeckers peel the bark off of the trees looking for insects which are good yummy protein. In the picture above you can see her tongue darting under the bark to collect her prey. I was happy because I got to add the black-backed woodpecker to my list but I was still hoping to see a three-toed also. After leaving Blue Spruce Road our filed trip moved back into the bog and our leaders decided to drive down Admiral Road. Mike, and several other residents, had hung suet feeders and parts of deer carcasses on some of the trees along Admiral. There were also quite a few trees that had their bark peeled lining the road. We stopped the bus near a group of these peeled trees and it did not take very long for our guides to locate a male three-toed woodpecker. 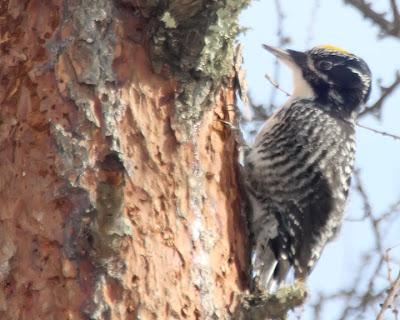 It took a while but I finally got both the clouds and woodpecker to cooperate and got a nice pic in descent light. I was very happy because in the 3 days of the festival I saw both of the northern woodpeckers that had eluded me. I also photographed quite a few other birds, 18gb worth, but instead of one really really long post I am going to break it up into a few smaller ones. So if you want to see more from the Sax Zim Winter Birding Festival, including redpolls, grosbeak, jays, chickadees, eagles, owls and more, then come back and visit again during the next few days.
Posted by Ecobirder at 3:00 AM

Beautiful photos Jeff! I especially like the two of the black-backed showing how they flake the bark away instead of drilling. I'm looking forward to seein the rest.

Nice! I wish I would have known about the festival. I definately would have driven up there. :(

Hey thanks for the info on the Swans. I headed up last week and just managed to get the photos up. Here's the link if you want to take a look:
http://www.purplepigphoto.com/365/412.aspx

Thanks Lynne. I took a lot of pictures but the woodpeckers were definitely what I was hoping for and I was very happy to come away with some nice pictures of both types.

Cas, it is too bad that you did not hear about the festival. I spoke with Mike Hendrickson and he plans to keep it the weekend before Presidents Day again next year, so start planning now.
I am glad that you found the swans in Monticello. It is definitely a sight to see. Since the weather is going to be nice this weekend I may end up heading that way again. I still have quite a few photos from my last trip so I will try to pop up another swan post and I will add your link to it so that people can get to your site a bit easier.

EB, Thanks for the link back for when you post more shots. I can't wait to see them (and the rest from the Sax Zim festival).

I'm going to try and take advantage of the nice weather while we have it over the next few days. I was thinking of heading south, perhaps to the red Wing area or somewhere else along the river.

www.blogger.com is very interesting forum for me, so I think we have the same hobbies
So lets chat...
My e-mail is marypopovaks@gmail.com, Skype *
Send me your foto!

This photography is corrupted, sorry!

Oh, and all my photos here:
http://loveepicentre.com/user/Popova