On a post that I made earlier this week about a red-shouldered hawk, that I relocated, AW posted a comment asking how the red-shouldered hawk flies with respect to the red-tailed hawk. This was a great question and one that, quite frankly, I was not sure what the answer was. So I did a little bit of research and here is what I have found. Most online resources that I found do not explain very well, if at all, the flight patterns of the birds. However the Carolina Raptor Center website does include an explanation of flight in each raptors description. 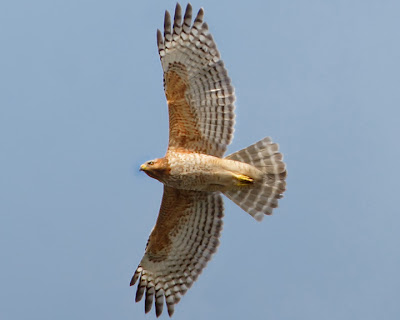 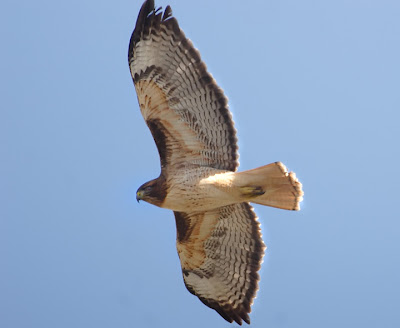 The active flight of the red-tailed hawk has slow deep wing beats. When it is soaring the red-tail will usually have its wings in a slight dihedral, or V shape. The red-tail can also hover or kite in the wind. Red-tails typically appear stockier with a shorter tail that often has a red tone to it. The above red-tail photo was also taken in California in 2007 and shows the differences in the wing shape between the two species of buteos.

The differences in flight may correlate to each species preferred habitat. The red-shouldered hawk is usually found in wooded area near to a water source. Red-tails are a border species who typically live at the edge of the woods where it meets open field. Since red-tails do much of their hunting over open fields they can spend a lot of time soaring and conserve energy. Birds that live inside more forested areas, such as red-shouldered hawks, would need to do more flapping and maneuvering to get around. Their longer tail would help them in their maneuvering.

Thanks AW for visiting my site and asking a great question. One of the great things that I have found out about blogging is that I seem to learn something new all the time which in the end is making me more knowlegeable and a better birder.
Posted by Ecobirder at 3:50 AM

very interesting and helpful. Thanks

This is great info ecobirder...I never knew about the tails of the hawks and how they control flight...we have red-tails living on the edges of the forested areas so this makes a lot of sense to me.
They do a lot of soaring over open fields. I love learning these details about birds...there is so much to learn.

A pair of red-shouldered hawks live near a small lake behind our home in Georgia. The tail is the key to telling the difference in a red-tailed hawk and a red-shouldered. Red-shouldered also seem to be more vocal. Nice pictures. Thanks.

There is much variation, however, Immature RTHAs and immature RSHAs both have generally have longer tails than adults. In my opinion, tail length is useful in adult birds. Wing shape comes in handy always. In a glide, Red-shoulders typically don't have "hooks" on the ends of the wings like a Red-tail would. A Red-tail would also be noticeably bulkier. Circling, Red-shoulders have shorter, "boxed" shaped wings, while Red-tails have slightly longer, rounder wings. In a close view, Red-tails typically have more outer primary feathers than Red-shoulders. The plumages of immatures in both species are very different, as well. The flapping of both species you mentioned is also quite a useful trait.