Beside grosebeaks there were also a lot of redpolls at the Morse feeder station on Blue Spruce Road. 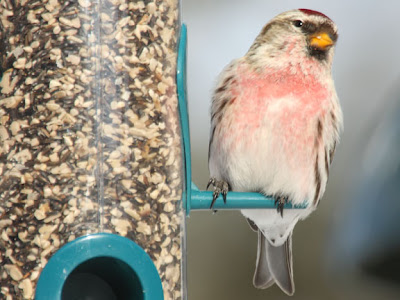 Redpolls are a small passerine that breed in the Boreal and Tiaga regions. 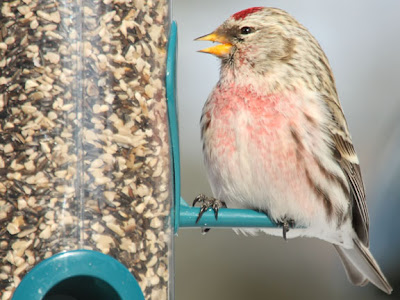 Their preferred habitat is open coniferous forests and birch thickets. 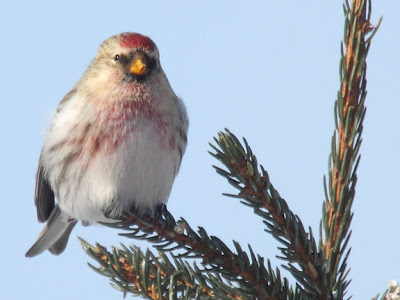 During the winter, if food is scarce, they will migrate south into southern Canada and the northern United States. 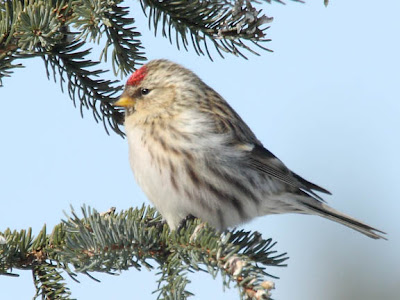 Redpolls are seed eaters. They have poaches in their throats where they can temporarily store seeds so that they can eat them later when they are in a more secure and warm location. 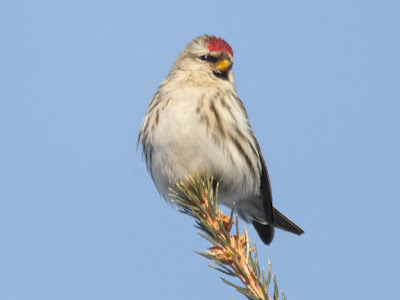 It is funny that right now, up north, it is kind of a rare sighting if the spot a dark-eyed junco but redpolls are quite common 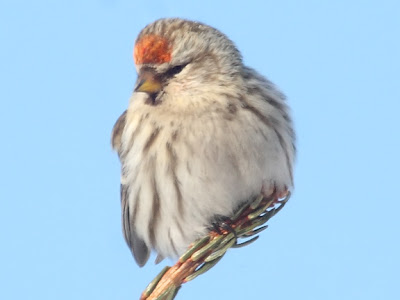 While 150 miles south in the Twin Cities we have loads of juncos and people would be flocking to see any redpoll that might show up. 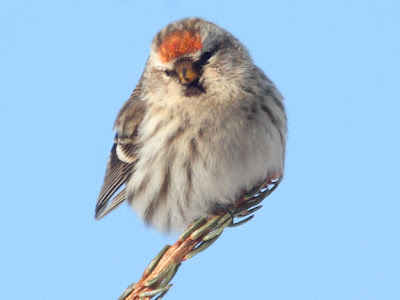 There are two types of redpolls that have been visiting this feeder station the common redpoll, as pictured above and the hoary redpoll, which is much more rare this far south. 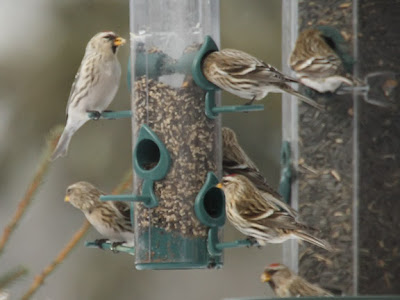 The hoary redpoll is distinguished from the common by it frosty pale appearance. Hoary redpolls also less or no streaking on their undertail coverts. Can you pick out the hoary in the pictures above and below? 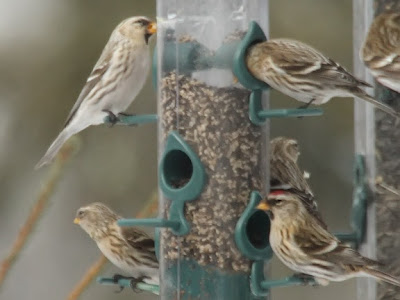 I found it pretty hard to tell the difference between the hoary and common. Often how the light was hitting the bird would make you think that it was a hoary when it was really a common. I know that the bird pictured above was a hoary because it was pointed out be Kim Eckert, who is much better at bird identification then I am. 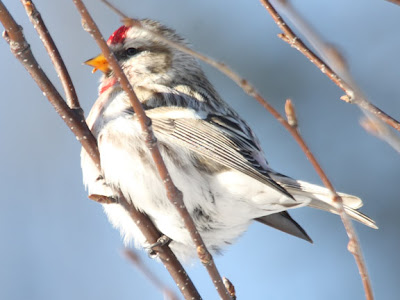 I have also heard that sometimes hoary and common will crossbreed. I am wondering if the bird above may be a hoary, or at least a partial hoary, male. 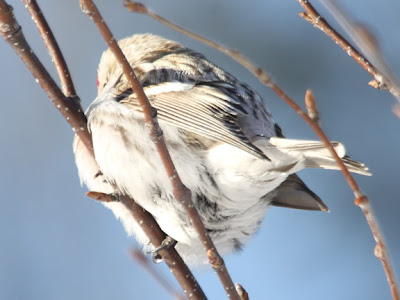 He appears to be very frosty, extending back all the way through the tail. He also has more white on the secondaries and even though he does have some streaking on the undertail coverts it is minimal and appears to fit what Sibley has defined for a possible hoary. But like I said I have not been very good at telling them apart. So why don't you let me know what you think? Is this a common, hoary or partial redpoll.
If you are like me and need a bit of help deciding here are a couple of posts on hoary identification from David Sibley's blog and from Mike Hendrickson's blog Colder by the Lake.

John Mikes, over at Weekend Shooter, also has some great shots of redpolls that he took this weekend while I sat home with the flue. You should check them out they are very nice.
Posted by Ecobirder at 8:02 AM

well this is a lovely blog! and thanks to Ocean I found you. I had a redpoll visit a few weeks ago, eating seeds with the pine siskins. a life bird to be sure. Thank you for sharing your wonderful photos. I will be back!

Thanks Dawn, I am glad that you came to visit. I have seen common redpoll before but never really got any good pics until now. The hoary redpoll was a lifer for me.

Island Rambles is a great blog. I usually try and visit every day to see what Ocean has to say or see one of her cool pics.