In Search Golden Eagles at 20 Below

What do you do when it gets to 20 below zero and 40 below wind-chill? You go out looking for golden eagles of course. This Sunday Scott Mehus, from the National Eagle Center, lead a field trip through the back roads of southwest Wisconsin in search of Golden Eagles. Scott organizes the annual golden eagle survey that I participated in last month. The survey, which was held on January 17th, included 67 observers that covered 26 routes, 16 in Wisconsin, 9 in Minnesota and 1 in Iowa. The results of the survey were, 37 golden eagles spotted on the count day, 31 in WI and 6 in MN. An additional 23 birds were spotted during the count week on routes not covered during the count day, 17 in WI and 6 in MN. During the count observers also spotted 390 bald eagles, 112 red-tailed hawks, 18 rough-legged hawks, 1 red-shouldered hawk, and several American kestrel and sharp-shinned hawks.

The group that I was in covered an area just west of Wabasha, MN. We spotted about 10 bald eagles and a red-tailed hawk but no golden eagles. Since some of the observers were like me and did not get to see any golden eagles Scott put together this field trip to give us another chance to catch a glimpse of these marvelous birds before they head north. Scott chose Sunday the 10th as the date for the field trip. That Sunday the skies were clear and blue but it was very cold, later that night International Falls Minnesota hit a record of 40 degrees below zero. People who wanted to participate in the field trip were to meet down in Cochrane, WI at 1:30PM so I decided to start off early in the morning and do some birding on my way down. I arrived in Cochrane a bit early so I ate some lunch while Scott and the rest of the participants arrived. There were 8 of us who were crazy enough to brave the cold and join Scott on this adventure and we were not disappointed. Scott found us a pair of golden eagles right away. Unfortunately they were perched close to the trunk of a tree which was not really great for taking pics. Scott explained that golden eagles do not typically perch out in the open like bald eagles do which is why most people often miss them. Later on we did find one that was perched more in the open; he was pretty far away, at least a mile, so I was not able to get a lot of detail in the shot. 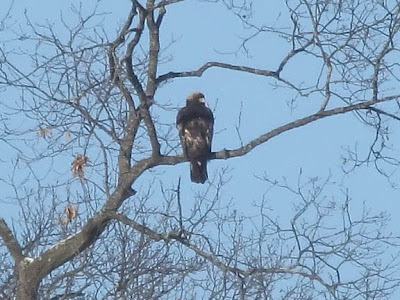 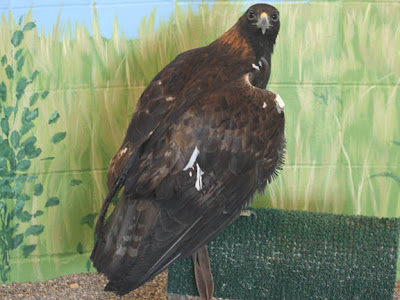 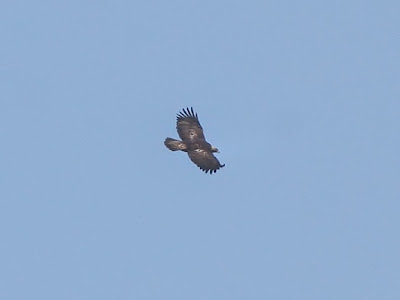 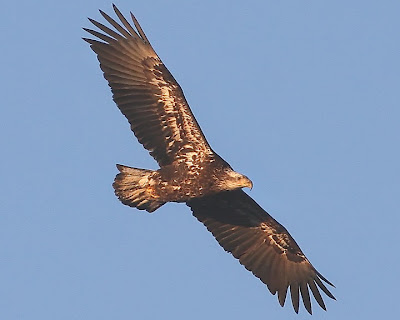 The immature bald eagle, like this one that flew over with 2 others while we were out looking for goldies, flies with its wings straight out at its sides and its head, with its large beak appears to be about the same size as the tail.

Soon these birds will leave this area and migrate back north. Where their breeding grounds are we are not sure though it is suspected that they are part of the Ontario or Quebec golden eagle population. Through the National Eagle Center and Scott's efforts people are becoming more aware of this golden eagle population that we have wintering in our area. Scott spoke briefly, at one point, about how he hoped to someday be able to tag a couple of the eagles with GPS so that we could track where their summer range is. I think that would be a worthwhile project and I would love to be involved with it. For now I plan to continue to participate in future golden eagle surveys, even on dreadfully cold days.
Posted by Ecobirder at 4:25 AM

The Golden Eagle is at the tops of my wish list. Any suggestions on differentiating between the golden and a TV in flight?

Haha, I remember this trip. It was sooo cold out there.
I was with Dan Jackson from La Crosse.
yes, those 8 people that showed up were crazy. But it was worth is to see the Eagles. After we cut out of the group, Dan and I had an Adult Golden fly within 50 yds of us. That was fun. lol, kinda funny, a little farther along the same road, we ran into a snowdrift and had to turn around.
Here's my post from the trip:
http://swallowtailedkite.blogspot.com/2008/02/golden-eagle-field-trip.html

Lynne, I will look and see if I have any good turkey vulture flight pictures that I can post for comparison. I am sure that I do but I will need to look for them.

Chris, it was cold but worth it. It looks like you guys really lucked out and got a great look. I left right after you guys did and went to Redwing and took some bald eagle pics that I will be posting soon.