Wild River State Park, located along the St Croix River north of St Paul and Minneapolis, can probably be considered the first park that I ever birded in as an adult. In my younger days I spent a lot of time working. In the mid 90s I was working a full time job and a part time job and trying to run my own family entertainment business, for which I did 99% of the work myself. I had very little time for anything but work and Michelle, my wife, but a few times a year I would get a weekend off, these usually came in September, January or February which were the slow times for my business. Michelle and my wedding anniversary is in September so one year we went up north for our anniversary. While we were in an info center in Duluth we read that a good place to view eagles in the wild was Wild River State Park. Since I had been into nature as a kid I thought that it would be cool to see an eagle so we decided to stop off at Wild River on our way back home. The day that we stopped the sun was shinning and the temps were in the upper seventies. We spent the next day laying on a sand bar on the shores of the St Croix searching the skies overhead for eagles. We had so much fun that we returned several more times that fall. Later that year I decided that I could not continue working so much, so I went back to school got some certification and in 1998 took the job that I am working at today. I still work a lot but I do take time now to enjoy nature and my life and then come here to share the experience with you. 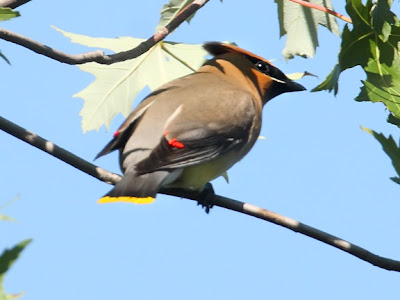 We returned to Wild River frequently over the next few years but as I learned of other places to bird our trips there decreased. I did make one trip to Wild River in August (8-24) of 2008 and I saw a few interesting birds. There were a few cedar waxwings travelling up the shore of the St Croix, probably searching for berries to eat. 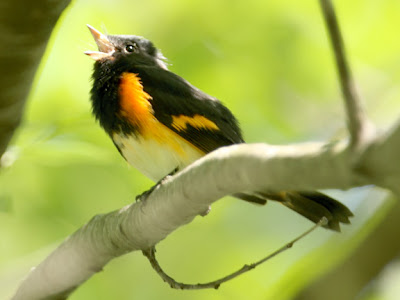 The American redstart is a wood warbler that usually hangs around southern Minnesota around the summer time instead of heading further north. Like most warblers they are insect eaters which is a good thing to be around Wild River where there are a lot of insects, don't forget the mosquito repellent if you visit. 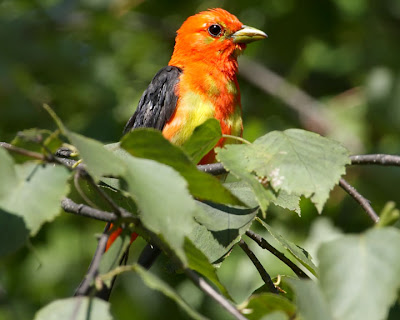 The most exciting bird that I found on this trip was this scarlet tanager. Scarlet tanagers are not uncommon in Minnesota, except in the winter, but since they often stay near the tree tops they are sometimes difficult to find and even harder to photograph. 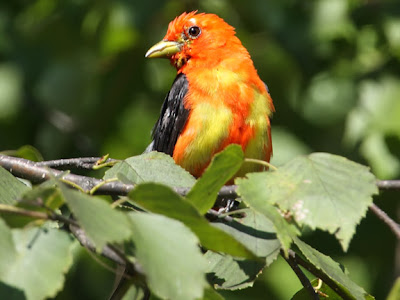 This tanager was in the middle of molting from his summer breeding colors to his winter coloration. Males in the breeding season turn a bright red with black wings. In nonbreeding plumage the male looks similar to the female and is olive green in color. 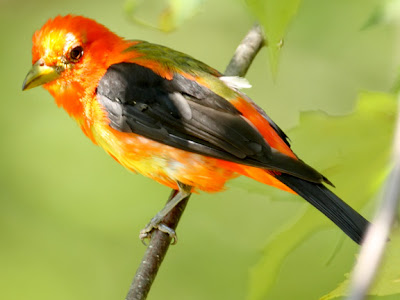 Interesting to see such great pictures of Scarlet Tanagers in molt. Great pics!