In October (10-11) I took another trip, my second in 2008, to Necedah NWR in central Wisconsin. The goal of my first trip, which was in early June was to capture photographs of the endangered Karner blue butterfly. My secondary goal was to get some pics of red headed woodpeckers and although I did get a couple of pics they were not as good as I hoped for. So I decided to return in October to try and get some better shots. 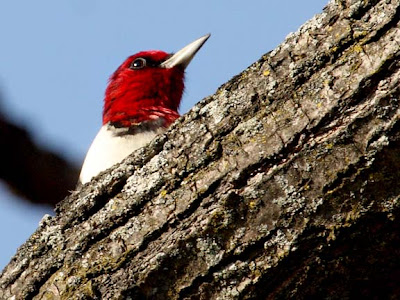 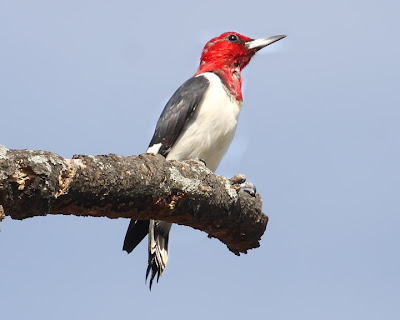 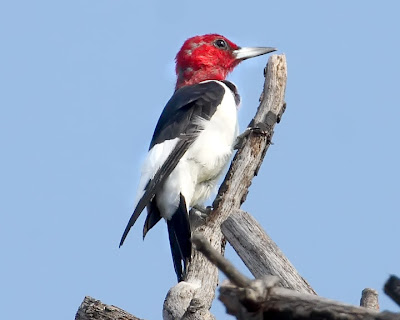 The red heads declining numbers are primarily due to habitat loss. They rely on wooded areas with a lot of dead trees, snags and stumps, which they use for roosting and caching food. Unfortunately human activities such as clearing out dead wood, clear cutting forests, farming, and fire suppression have destroyed much of the acceptable habitat. 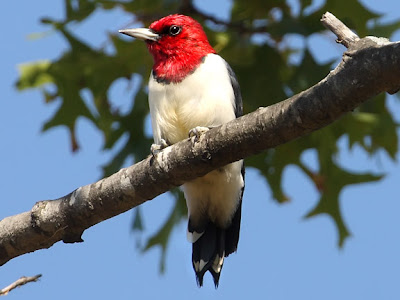 At Necedah there is plenty of dead trees for the red heads to roost and cavities to nest in. The seeds around for them to eat and the forest floor does not have much undergrowth. This is important because do much of their foraging for insects on the ground and in the air. They are also one of the few types of woodpeckers that cache food for future consumption and the only type of woodpecker that will cover its cache.

Posted by Ecobirder at 7:16 PM

wonderful images. Sounds like you were a bit surprised to have this bird show up for you instead of the cranes. Lovely that you were able to get great images.

What great shots! The first one is my favorite!

A beautiful bird that I've always wanted to see!

Thanks for the great photos of this lovely bird...I was just looking at them in Florida yesterday. We did a three mile hike around a lake and saw at least three pair. We didnt have our digiscope set up with us so I didnt get photos.
So its great to see your photos today.
thanks also for the information. I didnt realize that their population was declining so quickly...what a shame.

Awesome shots! You are a great photographer.

you got some really nice shots. I love the last one.
Happy CC!

I love how vibraint the red is on this woodpecker. Great photo as always.
Smiles B

Yet again incredible. We don't get woodpeckers on the island.

Oh, wow! Your posts always impress me. And since I've never seen one of these outside the pages of a field guide, your photos are a real treat! Great captures!

What a beautiful bird. Great shots!

P.S. Are you holding a Golden Eagle in your identity shot?

This is the one woodpecker that I never see. I saw one last year for the first time in New Harmony,IN but didn't get a good photo. Maybe I'll get lucky and see it again this year. It's a pretty woodpecker. Sorry to hear they are declining.

Stunning images! I haven't seen one of these birds in years.

Oh wow, redheaded they are. Beautiful photos! Especially liked the first one.

Dancin' Fool actually the eagle in my ID shot is an immature bald eagle. It is a small picture which makes it kind of hard to tell but you would not find white feathers on the breast of a golden eagle like there are on this bird.

Great photos! Thanks for sharing.

There is a Pileated Woodpecker that likes to peck my chimney cap during the Spring. He's terribly annoying but a gorgeous bird nonetheless.

Excellent shots. They're so sharp and clear and that little red head is just amazing. :-)

Hello!
I work for the Girl Scout Council of the Nation's Capital and we are working on trail signs for Potomac Woods Girl Scout Camp. I was wondering if we could have permission to use your Red-headed Woodpecker, picture on our sign? If we can email me back at hmahony@umd.edu
Thanks!