I have spent quite a bit of time lately photographing owls. Winter is not always fun in Minnesota but there are some advantages. Winter in Minnesota is the time of the owls. In December I was out photographing snowy owls at the airport. Many have been removed but every now and again someone still sees one. Then in January I made several trips to northern Minnesota to photograph the great gray owls and northern hawk owls, which have come down from Canada. Now February has been the month for photographing nesting great horned owls. 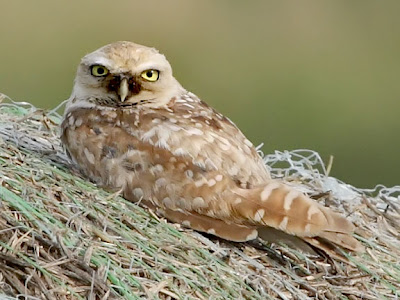 All of those pictures will be posted soon but I still had a few shots of the burrowing owl that I photographed in South Dakota this summer that I wanted to post first. 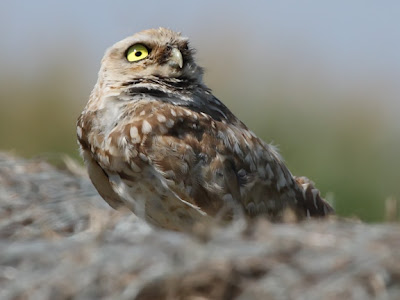 When most people think of owls they think of a large bird that hides in the trees during the day and comes out to hunt at night. The burrowing owl is pretty much the opposite of that stereotypical image of the owl. 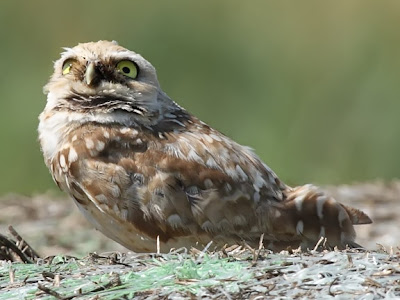 Although you can sometimes find them in trees they are more often found on the ground, or in this case on hay bails. That is because unlike most owls they nest underground, either digging a burrow of their own or commandeering one from a small mammal, such as prairie dog, armadillo or skunk. 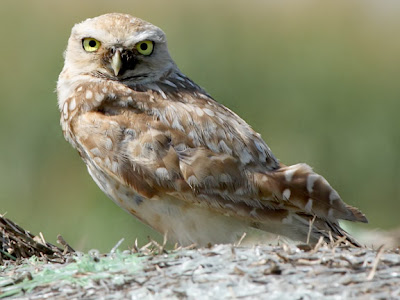 Another thing that is different about burrowing owls is that they can often be seen hunting during the day, which would make them diurnal. This owl would come to the same field each afternoon, at least for the 3 days that I was there, where it would hunt for rodents and insects from its perch on top of the hay bails. It is impossible to tell if it was a male or female because, unlike other owls and raptors, both sexes of burrowing owls are the same size.

Wow, those eyes! I always look forward to coming here to see what you've been seeing. Your photos inspire me! And I always learn something new when I visit. Love that.

I thoroughly enjoyed learning about the burrowing owl. He is a beauty and these are awesome photos. Thank you for sharing him. It has been a fun visit.

Ooooh OWLS!! They drive me craaazy! )
Burroving owls and Scops owls are my favorites. Great photos!

Wonderful photos. They're a joy to see :)

they seem so small and compact- Are they in real life?

We have burrowing owls,here in florida.But construction is taking way their habitat.Saw an injured one while at the vet's.they sure do make a lot of noise for such a small bird.

Oh, great shots! What a beautiful colour those eyes have. They are really piercing.

Incredible beautiful images. Those eyes are so instense.

Those are very good pictures. Helen

Absoluteley spectacular photos! Every time I see an owl, I don't have my camera :-(

You can't go wrong with owls, at least not in my book! These are great. I was hoping to see some in AZ last year but never got a chance:(