Each year many birds migrate from their breeding grounds, up near the Arctic Circle, south to more hospitable climates. Some do not travel far, moving south only to find food, while others fly a great distance to their winter grounds. 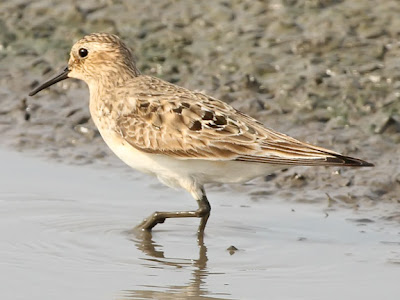 The Baird's sandpiper is one of those birds that migrate a great distance each year. They fly from breeding grounds in northern Canada and Alaska to wintering grounds in central and southern South America. 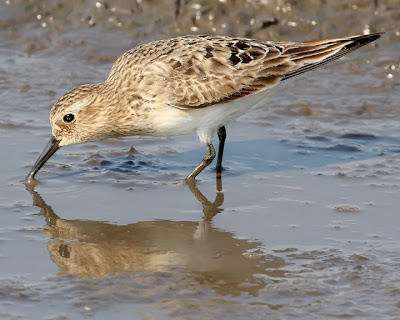 Before they begin their long trip to South America in the fall they begin staging in Canada and the northern United States. For those of us living in North America this is the time when they are the most accessible. 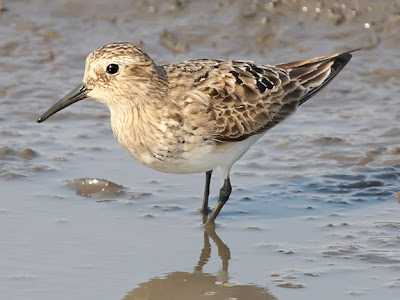 Once they begin the migration they fly rapidly for long distances, they may cover up to 4000 miles nonstop, through the center of the United States then down through Mexico and Central America 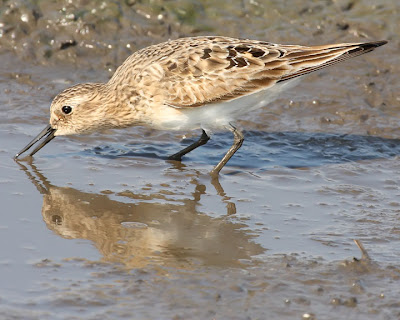 I took these pictures while at a shorebird conference in South Dakota back in August of 2008. Although we saw many shorebirds at Salt Lake, an alkaline lake on the Minnesota and South Dakota border which is known for its shorebird habitat, the best spot we found for shorebirds was an empty farm field which had a large mud puddle in it. That is where we saw this Baird's Sandpiper. 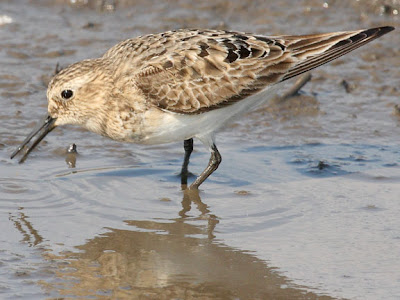 We identified this sandpiper as a Baird's because its wings extended back past its tail. In our seminar we learned that for sandpipers this size, at least those that we find in this area of the world, only two types have wings that extend past their tail feathers, the Baird's and the white-rumped sandpiper. The white-rumped is lighter in color and has a white-rump.

Great shots! Very clear! Thank you for the extra information.

Sandpipers are such a challenge! I'm glad you told us how to distinguish them. I wonder if they stop off in AZ at all? Currently I am only good at ID-ing the spotted, least and Western Sandpipers!

Very nice photos of the sandpiper.

That IS quite a trip for these birds & amazing too! Fantastic shots!

Awesome shots! Such a beautiful bird!

Isn't that so often the case: you try to get the photo of the Great Blue Heron down at the river but it keeps hanging out in a crook of trees behind the post office, or some other odd spot.

Excellent shots. I really like the ones where you caught it's beak slightly open.

What a cutie. Great shots, I've never had much luck with birds.

Love the sandpiper series. You always do an awesome job.
Smiles B

I love the reflection of the bird in the water!

My Watery Wednesday entry is posted here. Hope you can drop by, too.

Very interesting images. I didn't know this sandpiper. Thank you for the introduction.

Lovely bird! And great shots! And interesting reading too! I took the opportunity to add you to my bloglist as a follower!

What a great find...I would Love to see that birdie and add it to my life list...
Great shots..