Today while I was volunteering at The Raptor Center someone asked me why there seems to be so many robins around this year. 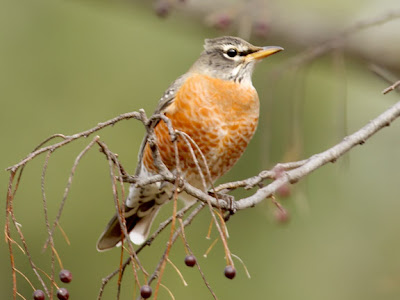 This is a good question. Many people associate robins with the coming of spring but the truth is that robins over winter in much of their breeding range. 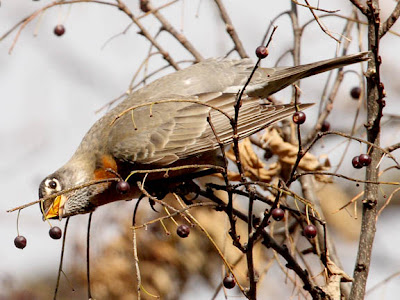 Robins, like many birds, are omnivores. Their diet consists mainly of insects and fruit. During the summer robins are frequently spotted on peoples lawns looking for earth worms, but during the winter, when insects are not around, the robins gather in flocks and eat fruit to survive. 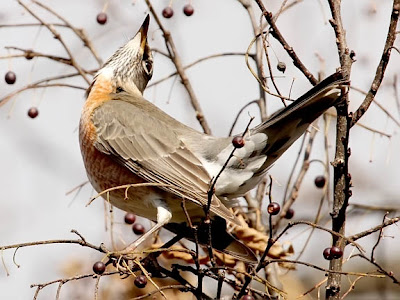 Because they are gathered in flocks during the winter instead of dispersed through out an area, like they are through the rest of the year, many people do not see them so they believe that they have headed south like many of the other birds. 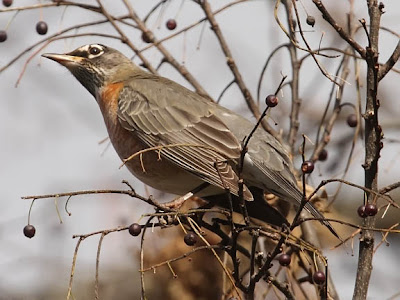 But this year there does seem to be more flocks around and they seem to be further north then usual. Most of the robin flocks that I have seen in past years have been south of the Twin Cities but this year I have seen flocks up in the northern suburbs. 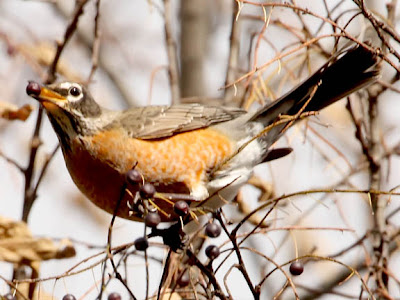 The reason why there seems to be more around must have to do with the availability of fruit. Maybe this year their is more fruit left on the trees which means that more robins will stick around. I do not know this for a fact it is just a theory but it does make some sense. These robins where photographed at Hok-Si-La Park in Lake City, MN on November 17th.
Posted by Ecobirder at 9:30 PM

Very good pictures of the Robin. I see them getting worms in our yard. There seem to be more at times guess maybe they are passing through and feeding while they are here. Helen

I miss robins! There used to be one that would come and peck on my mom's living room window at 9AM everyday (back in St. Louis, MO). Here in San Diego we mostly only see sparrows, pigeons, and California gulls.

Thanks for this wonderful blog and all the great photos, too! :o)

So different with our British Robin which we associate with winter. I am constantly noticing changes each year with visiting birds.

Wonderful captures. I really like that one where its arched, bending its head back towards its tail. What a unique pose.