Birders in the Twin Cities have been pretty excited for the last week because of the sighting of a varied thrush in one of the northern suburbs. The thrush was first reported this weekend, and it has been visiting a couple of crab apple trees, located in a residential yard in Roseville, MN, on a regular basis through out the week. 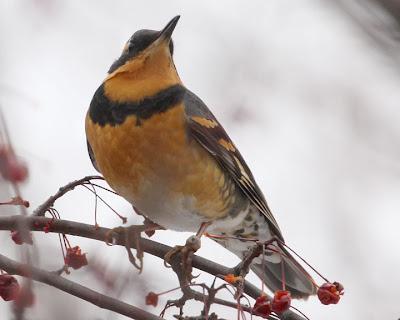 I decided to run up to Roseville after work on Monday. The weather that day was pretty miserable, with overcast skies and drizzle that turned into cold rain, so I was not sure that I would be able to get any pics, but since we do not often see varied thrush in Minnesota I decided that it was definitely worth a try. 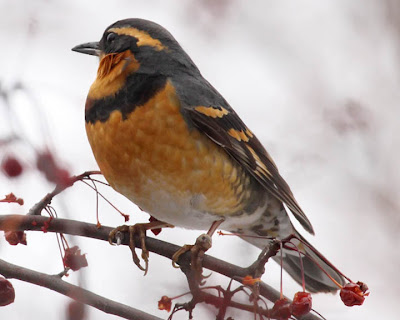 When I arrived at the location that the bird had been spotted there were already several other birders there, including Sharon Stiteler the Birdchick, the bird was in the crab apple trees along with a few robins. Unfortunately before I could get set up for a shot a passing car spooked the birds and they all flew off. Since most everyone else had already had good looks of the bird they all decided to leave but I stayed hoping that the bird would return. 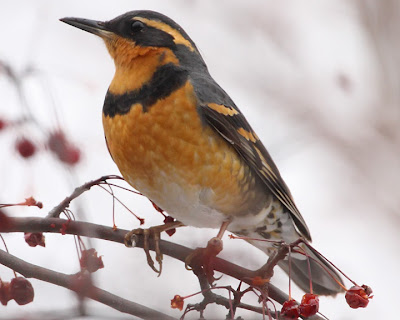 About 15 to 20 minutes later a couple of robins came back to the crab apples, which got my hopes up, and then in flew the thrush. The thrush flew to the back side of the tree but I was able to find a position to shoot through the branches. Since the lighting was so bad I had to turn my ISO up to 800 and open up my aperture so that I could get enough light. Because of this the pictures are a bit washed but they I was happy with them considering the conditions. If he sticks around for a bit perhaps I will have an opportunity to photograph him in the sun and get some better pics, but since the varied thrush is a west coast bird and they do not often come to our part of the country I am happy just to have the pics that I got.

Posted by Ecobirder at 6:56 AM

That is a beautiful bird. I have never seen one of those. Since you said they were from the west coast me being more on the east coat I don't suppose I will ever get a chance to see one. Thanks for sharing. Helen

What a beautiful bird! See a lot of birds I'never seen, visiting your blog!

Still great images, hopefully we spot one on the tree at our place, last year the Pin Cherries had been picked clean by Robins, Starlings, Waxwings all within a couple of weeks.

I think your pictures are amazing. They don't look washed out to me.

Did you wait outside in the snow or in a warm car?

Very nice. Your previous post reminded me of the many times we family camped at Wild River or canoed down from St. Croix State Park

Beautiful bird. I'm glad you got to see it.

Such a gorgeous bird and again not one I am familiar with.

Such Lovely markings on the face and chest.

I played (late) at http://pawesomeblog.blogspot.com/2009/02/cats-tale.html

Very nice shots, I don't think I have ever seen one of those.

Nice shots of a beautiful bird!

You're great at taking bird photos... but I shouldn't be surprised by that given the blog title!

Oddly enough the movie "Birdy" is on my TV screen as I write this ;)

My husband and I have been seeing this bird for several days now, our daughter came to visit for Christmas. She knew it had to be a thrush, my husband gave me a bird id book for Christmas and she found it and then we looked on the net, found your site and your picture was exactly like the bird we have been watching. What an exciting morning for us here in Robins,Iowa. Made our day. Merry Christmas to you and thanks for the beautiful picture you posted.