Typically one of the main things that I photograph during the winter are eagles. 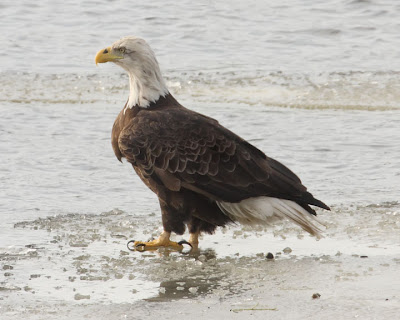 Since more eagles live in Minnesota than any other state other than Alaska they are usually not too difficult to find. 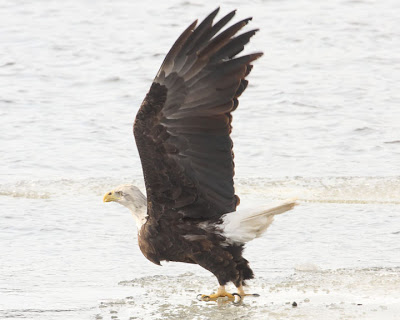 During winter they are even easier to photograph because they congregate where ever they can find open water. 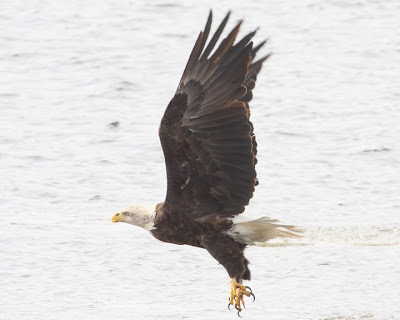 Through most of the winter there are only a few locations to find open water, most are near power plants or where rivers join together, and this is where I have often spent many weekends over the past 10 years. 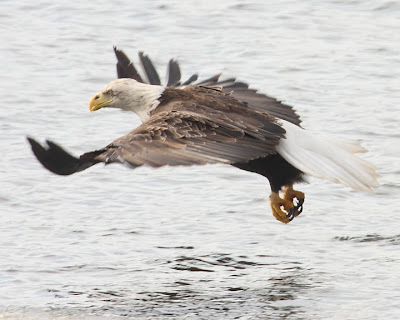 Colville Park in Redwing, MN usually has the largest number of wintering birds. The power plant, that is located just up river, helps keep the water from freezing up. It is not unusual to see close to a hundred eagles in the trees around the open water. 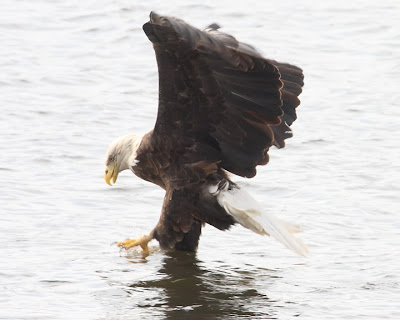 Unfortunately this year I have not seen many eagles around Redwing. The most that I have seen in the area during a single trip is only about a half dozen. On a trip down to Redwing this weekend I was really surprised to see that most of the channel where the eagles usually fish and roost was frozen over. This is very unusual and I wonder if the power company is doing some sort of work on the plant so that they are not currently pumping warm water into the river. 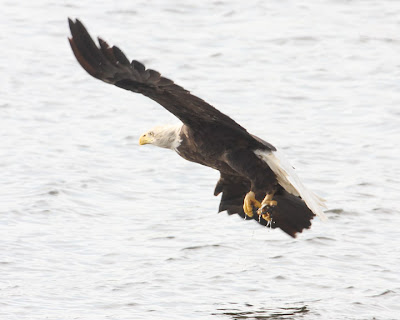 Another typical location that I like to visit is near the small town of Reeds Landing. The water stays open there because of the turbulence created by the Chippewa River joining into the Mississippi. I have seen a few eagles in this area of the river on my various trips but it seems as though there are quite a few less then I have seen in past years. 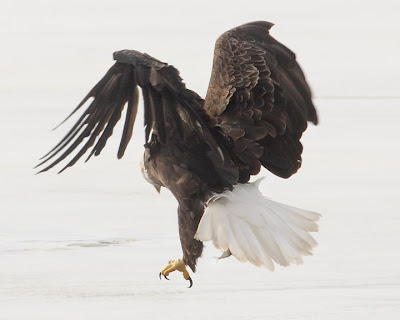 My best eagle experience so far this winter came back on December 13th. After striking out for the most part at all of my typical eagle haunts I decided to continue south on the Wisconsin side of the Mississippi River. 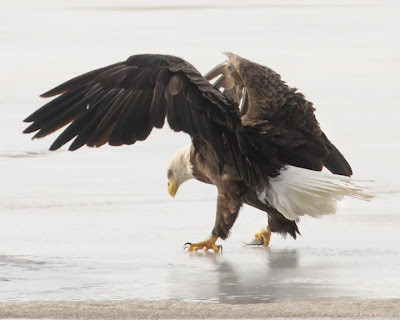 In the town of Alma, WI I found around 25 eagles on the ice below the damn. Most were sitting on the edge of holes in the ice looking for fish. Occasionally one would take off and scoop up a fish from the open water and take it back and eat it on the ice. All of the pictures in this post were taken at Alma on December 13th. 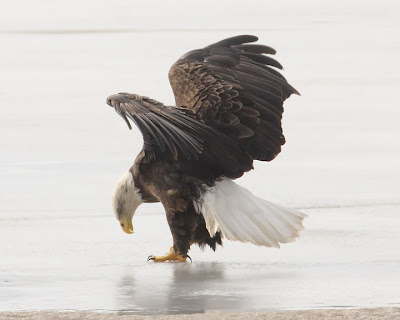 Since December I have made numerous trips down the river in search of eagles. I have stopped in Redwing, Reeds Landing, Alma, and Whitewater State Park, on each trip I have found eagles but not in the numbers that I have seen in past years. This may be a result the very colder than normal temps that we had in November, December and January this winter, which may have driven the eagle population further south this year then in the past.

Posted by Ecobirder at 3:04 PM

You got some great shots of them There are a few scattered here in AL along the waters but not many. Helen

I love your blog, and I use take a look from time to time. I really love the pictures. So artistic!

I am from Spain, and this is my first year living in east Iowa. About thirty minutes from Mississipi River. And from the first time in my life I´m interested in birdwatching. Here it is easy to find bald eagles, red-tailed hawks and northern harriers. And all kind of geese. But I´m still learning to identify them.

Your blog made me be interested in taking pictures. But I do not have an appropriate camera. When I find out what kind of camera I need, I will start to practice. Thank you very much for your dedication and sharing your work. I recommend your blog to all my frieds with fascination.

A hundred eagles in one place at the same time? Remarkable!!! I used to see an eagle here & there in SE Missouri when I was a kid, but I haven't seen one around here since then. I often wonder where they went & why they're not here anymore. I love love love your photos - they're amazing!

Thank you for sharing these marvelous photos!!!

I'm going to add your page to my blog roll so I can come back often!

Incredible shots of the eagle, Love em all.

Have great a day!
Guy
Regina In Pictures

Okay I am in awe. The closest I have ever come to seeing an eagle is at the local zoo. Those shots are stunning. What a beautiful majestic bird.

Wow, wow and wow! What a majestic bird and your photos do it justice. Look at the talons on this beauty. I hope to see and be able to capture an eagle one day.
:-)

You are correct in the assumption the birds moved further south early this season. A friend of mine who live along the IA/IL border was reporting numbers of eagles to the likes they have never seen.

Here are some of his shots from January.

These are such great photos. You have an amazing blog. I'll have to come back. Mine is more of an urban blog (Chicago) so the "wildlife" I see is a bit different.
Obviously I need to tool over to Redwing some winter. Probably not this year. Too busy.

Incredible shots, I look forward to the day when I can see an eagle like that but the next best thing to seeing them in the wide open spaces is to visit your blog. Thank you for sharing beautiful photos like these.

These are really something. The series with the little silver fish is stunning - especially that one. So glad the guy at the Sax-Zim festival told me about your blog. Your work is so very good.

GREAT shots! Eagles over-winter in St. Louis, but I've never been able to get such fabulous shots.