I have been spending some time over the past few days going through old pics. I was asked by a friend if I could provide some eagle photos for an eagle presentation at the Flint Hills National Wildlife Refuge in Kansas. So after going through my digital pics I decided to see what I might have that is still on film. I have only been shooting digital for about the past 3 years. Prior to that I shot on film for about 7 to 8 years. While going through my old film stuff I came across the pictures that I took in Hawaii back in 2002 and decided that I better get them scanned in before it is too late, the quality of the film cells is beginning to deteriorate on a lot of my older pics. 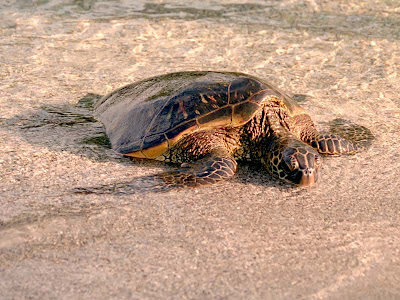 Some of the first pics that I decided to scan where these pics of endangered green sea turtles, since this trip was the only time in my life that I have seen sea turtles. Our trip to Hawaii was two weeks long and consisted of a week on Maui and a week on Oahu. We spotted this guy when we took a one day trip to the big island from Oahu. 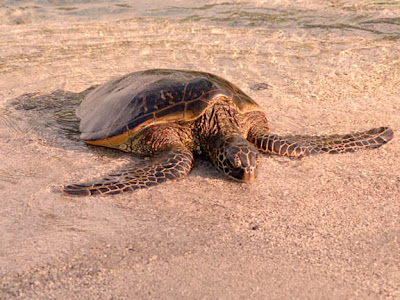 The day trip began early in the morning when we left Honolulu and flew into Hilo. Then we got on a small bus and drove the circle around the island stopping from time to time to take in the sites. At one of the beaches that we stopped at Michelle and I were down by the water when this sea turtle swam right up to where we were standing. It was very cool. 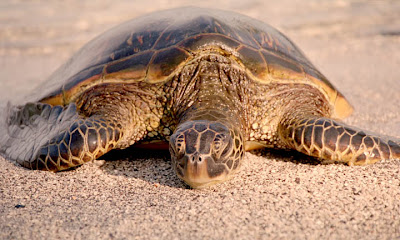 Green sea turtles grow to be about four feet long and weigh in around 300 to 400 pounds. They are found in all tropical and temperate waters around the world. They live in bays or other protected shores of islands or continental coastlines. As adults they eat primarily algae and sea grasses and they are the only sea turtle that is strictly an herbivore. Since green sea turtles only nest every three to four years, or more, they are extremely susceptible to habitat loss and human intrusion. Because of this, and the fact that they and their eggs are still harvested in parts of the world, it is estimated that there are lest then 90,00 nesting females world wide which is why they are also listed as an endangered species internationally.

Posted by Ecobirder at 3:50 PM

They are impressive beasts, that is for sure!!
Thanks for sharing!

you are really quite close to them, at that point.........really neat.

Great pics and info. I'll bet that was really cool to have that come right up to you. I think sometimes the animals are as nosy and curious as we are.
:-)

I recall the excitement when I saw my first leatherback turtle (large!) hoisted safely back into the sea in Cornwall ... probably about 1970.

Oh I love them, the turtle and how you've captured them.

What a beauty and how lucky you are to be able to see him so close up. Thanks for sharing.

Wonderful photos. I do hope they survive, or more to the point, I hope we let them survive.

I echo Deborah's sentiments. Beautiful photos - and hope that mankind can be kinder to the turtles.

What a treat to see a wonderful animal like that. So often when we are reading about wildlife, there is some problem that is man-made. When we will wake up to see that what hurts them..will (and is) hurting us..

That would have been a wonderful sight to see. Thanks for these great photos and also for the information about them.

Amazing photos! These guys are too cute! I went scuba diving in Hawaii and I turned around one time and there was one staring right into my eyes. It was an experience I'll never forget :)

wonderful turtle images. That must have been exciting to find and be around them!

Excellent post! Your photos are very nice and you've obviously done some homework to learn about green sea turtles.

I live on the Big Island of Hawaii, and we see these wonderful creatures all the time. It may interest you to know that this is one of the few places in the world where these turtles come ashore just to bask. By the way, Hawaii's green sea turtles do not nest on the main (populated) islands. They migrate to the uninhabited northwest islands to lay their eggs.

Wow!!! I love the turtle, the water looks so clean and very clear.