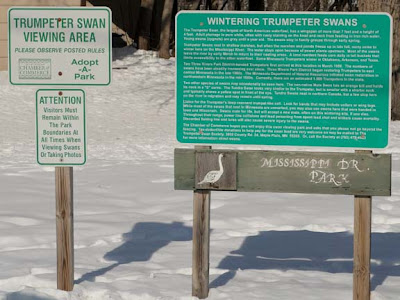 This tiny park is little more then an empty lot on the Mississippi shoreline. Other then that there is just a sidewalk, a fenced in viewing area and some parking. So what makes this little neighborhood park so special? Simple it is the neighbors. 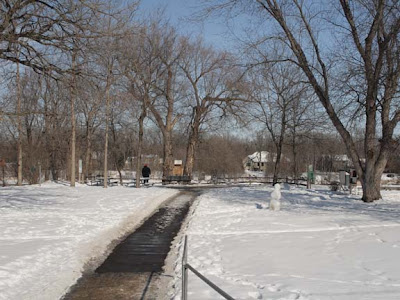 In the house next to the Mississippi Drive Park lives a woman who is affectionately called the Swan Lady. In the winter of 1987-88 fifteen trumpeter swans decided to winter in the Mississippi River near the park. They were drawn there by the open water, which is kept open by the power plant up river, and by the cracked corn that Sheila Lawrence was putting out for the ducks and geese. 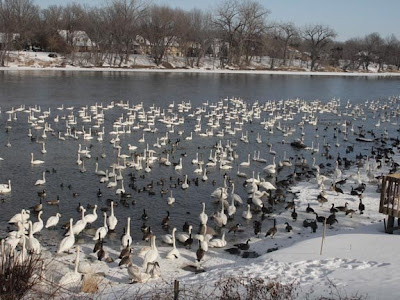 As the years have gone by more and more swans have wintered here and the Swan Lady has continued to provide for them. In recent years the numbers of swans have exceeded 1500. 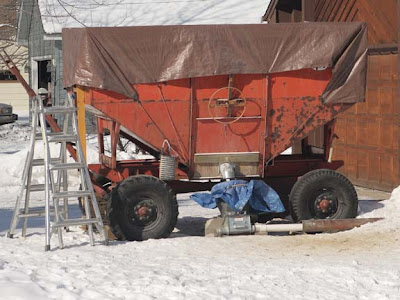 It takes a lot of cracked corn to feed 1500 swans, 1200 lbs daily. The corn is stored in the trailer, pictured above, which is connected to a tube that leads down to the river. When it is feeding time the Swan Lady hits the valve and cracked corn goes rolling down the tube to fill up a large bin down the the river. The Swan Lady then hauls buckets from the bin to fill up several other bins around the area. She is the only one that the birds will tolerate in their space. 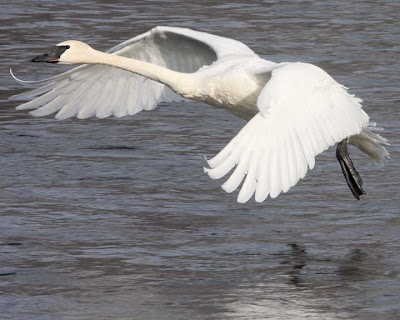 The trumpeter swan was almost extinct in the 1950s. At that point in time the only known swans were a couple of nesting pair in Yellowstone National Park. Later several thousand swans were found in remote regions of Canada and Alaska. 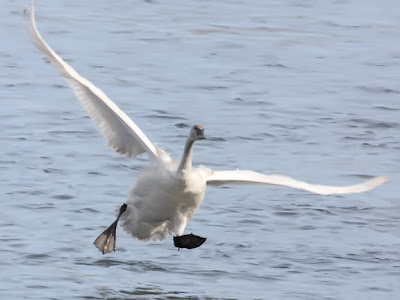 In Minnesota the trumpeter swan had not been since the 1880s. In 1966 the then Hennepin Parks Association began a release program using captive raised birds. 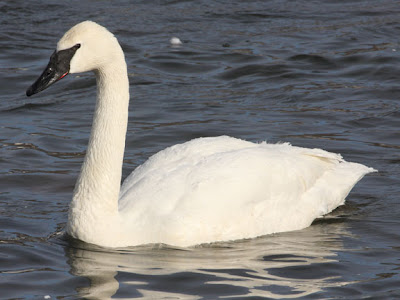 Trumpeter swans are the largest waterfowl in North America, with an average wingspan of 80 inches and weighing in around 17 to 28 pounds.

As you can see from these pictures the trumpeters have beautiful feathers which was the main reason for their near extinction. These swans were hunted until the 1900s for their feathers. Feathers were used for clothing, particularly women's hats, and for writing quills. 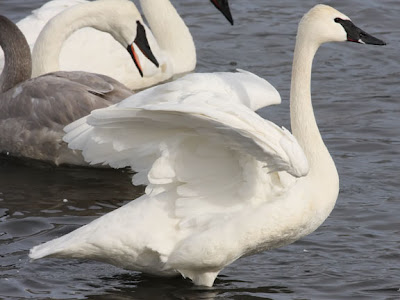 Trumpeter swans can live a long time. With very few natural predators, except for when they are young, they can live over 25 years in the wild. In captivity trumpeters have lived into the 30s. 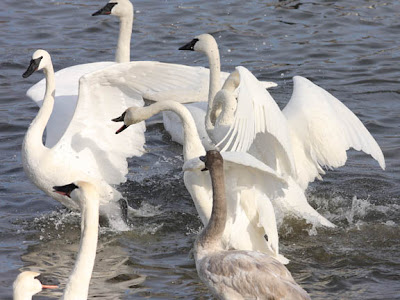 Young trumpeters, called cygnets, will stay with their parents throughout the winter until the next breeding season. At that point they will be chased away by their parent. The young swans will spend much of their time over the next two to three years with other unattached young swans. At three to four years they will find a mate of their own and begin to reproduce. Most swans will stay with their mate for life. Many of these different social groups are evident at Monticello and it is fun and very interesting to be able to observe their behavior.

Glorious photographs as usual. I was watching the interplay of two Bewick swans at the Wildlife and Wetland Trust in South Wales, UK yesterday. The snow did not reach us until today, but it was chilly! The swans would have looked even more magnificent against a blanket of white.

Pretty photos! Thank you for sharing.

"The dancing swan" ,could be the title of this post. Awesome photos.

The Swan Lady sounds wonderful. Beautiful photos of the trumpeter swans. I've seen them in the Tetons and Yellowstone. Didn't realize they'd been nearly hunted out in some areas.

OMGoodness... over 1500 swans in one location? Very interesting.

The photos are amazing; the swans are so gorgeous. I hope their tribe increase. Great post.

Swans are beautiful birds. WOW! They can live 25 or more years?

The Swan Lady must spend bucketloads of money to feed all those swans!

I loved this post! I use to live in Lakeland, FL. There is one lake just off downtown Lakeland dedicated to the swans. There are also some ducks and geese. They are magnificent creatures!

What a great post. The swans are magnificent and the swan lady sounds magnificent herself.

Great entry. Those swans are beautiful, so is the woman's heart who feeds all of them. Helen

These pics are amazing, and so is the post. I didn't realize we'd come that close to loosing the trumpeters. What a caring woman.
Thanks for sharing this part of your world.

this is a great post and i enjoyed the photographs as well. thanks for sharing this special story with us.

have a great week

Wonderful post yet again. I used to be a volunteer warden so for me always something to see and learn from here. The photography stunning on those last shots.

Beautiful photos as always. I always know will see beauty when I visit your blog. Two thumbs up for the Swan Lady.
Smiles B

awesome, beautiful pictures. Swans are just really elegant and mysterious for me. The Swan Lady should be commended for the good deeds she has been doing for the swans and the place as well. I hope there'll be more people to help her coz it seems like a big task to do it all alone. I hope she'll live long and healthy too. Bless her.

Oh these are wonderful shots of majestic birds. I used to work next to the River Thames in Windsor, UK and there were alot of swans there too.

Those swans are amazing! I'm glad there's someone who had a passion for caring for them. It's such a tragedy when a species - any species - is lost to this world.

Your close-ups are excellent!.
Salutations to Swan Lady, and her winged friends!

Great post and beautiful photos! I loved the story about the Swan Lady! Thanks for sharing! Have a very nice week!

Wonderful photos to illustrate such a caring story!I think it would be so impressive to see so many swans at one time, and I bet your photo of the group doesn't begin to show the reality!
Thanks for sharing!

Wow!! You really got some amazing shots. I'm jealous! :-) That one where it looks like it's running across the water is fantastic!!

Plans are to visit this location on Friday. Your post is very informative. Kudos on your images, nice series. Blue Skies.

You have truly amazing pictures of these spectacular swans! I also loved your Tundra swans section. Swan Lady sounds like a woman from a fairy tale :) The swans must love her.

Thanks for sharing your beautiful pictures. :)