My World: A Tragedy Remembered

Wednesday August 1st, 2007 was a lot like any other summer day. Since it was fairly sunny out I decided to go out and take some pics after work. When I got home shortly before dark Michelle, my wife called me upstairs right away to see what was on the television. 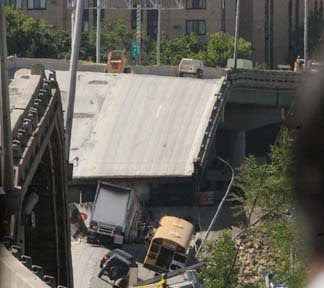 What I saw was unbelievable. A bridge had collapsed over the Mississippi. I asked Michelle where this had happened and I was shocked when she told me that it happened just a few minutes drive from where I work. 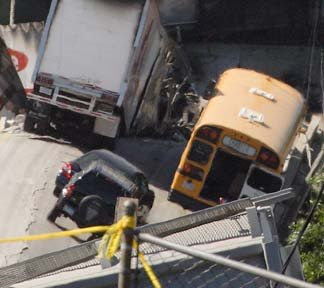 Construction on the interstate 35w bridge over the Mississippi between Minneapolis and St Paul began back in 1964. It was completed and opened in 1967. 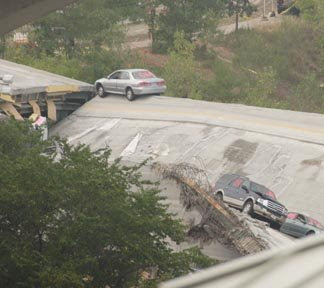 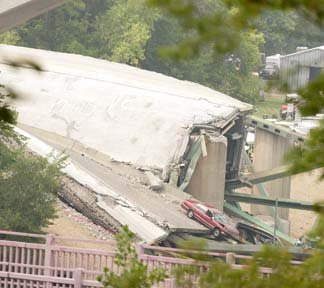 The central span of the bridge was the first to give way, followed by the adjoining spans. The center sections plunged around 100' down into the Mississippi River below. 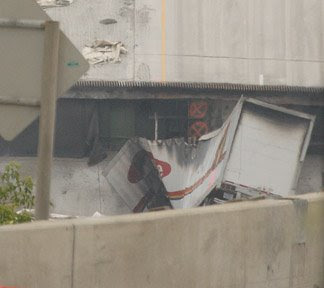 Over 100 cars and 18 construction workers fell along with the bridge. Thirteen people lost their life in the disaster and around 150 people were injured. 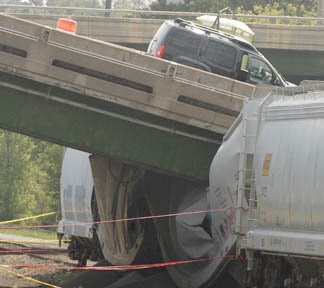 One of the north sections of the bridge fell down on to a railway yard that was below it squashing railroad cars like an empty soda can. 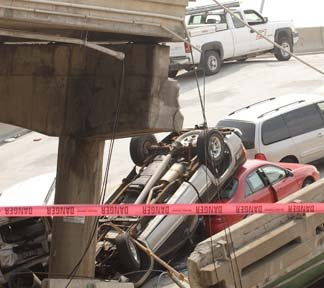 The reason that officials have given for the disaster is faulty gusset plates on the bridge, although some people also believe that construction that was currently being done on the bridge deck may also have contributed to the collapse. 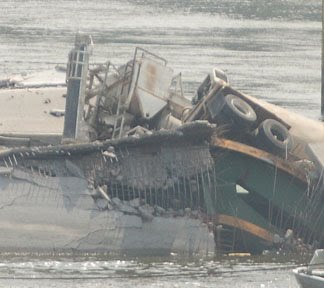 I took these shots the following day. It was a very sobering experience to look down at the twisted bridge deck and the cars that were torn, tipped and smashed. The school bus in the first pictures became an important part of the national news story as the exploits of a man who heroically helped the kids out of the bus became a silver lining to this tragic story. 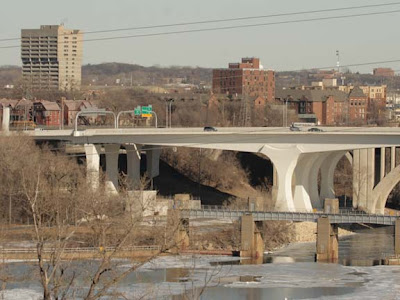 One of the guys who I work with came over the bridge every morning and evening and had gone over it shortly after 5pm that day on his way home. Now he travels over the new bridge which has one up in its place. 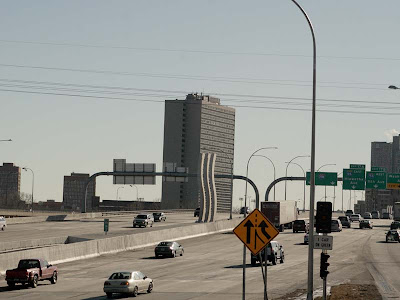 The new bridge was completed on September 18th, 2008 less then a year after construction began. I took this photo from out my window as I was getting on the freeway to cross over the bridge. This was the first time that I have driven over the new bridge and it was kind of strange thinking about what happened a year and a half earlier as I drove across. I have never liked traveling over high bridges, as a kid I had nightmares about it, but since 2007 the tragedy always crosses my mind when I head out over a bridge.

This was such a tragedy, you have some very poignant pictures here. I remember this well, when I heard about it I found a news station online, from the area and followed what was going on for days. So sad....

I remember when this happened. You got some great photos of it. Helen

It is hard not to forget that day, I worked less than a mile away from there. When I first moved to Mpls 30 plus years ago I lived on University Ave in an apt building that overlooked the bridge. Although I didn't travel the bridge much anymore, I had family members who went over it everyday. My brother normally would travel the span on his way to work at that time of day, but it was his day off. I was at work when the bridge fell and we all watched it on TV in numbed shock.

For me, it was a sobering reminder of the necessity to live for today. Thank you for refreshing that reminder.

Your photos are superb. I remember this vividly, so tragic but out of these events come stories of heroes, like your bus driver. I am sure there were others also. Thank you for sharing this.

That is a very sobering post. Excellent yet frightening pictures. Another reminder to appreciate our moments one by one.

I remember the stories about that tragic bridge collapse. I know it must be hard not to think about when traveling on the new bridge. Very sobering shots.

The photos are incredible! Scary, sobering, but incredible! Maybe a good reminder for people who don't see the need to do serious work on this country's infrastructure. Thanks so much for sharing these.

A great record of a very unfortunate disaster. The normal life expctancy of a bridge is substantially longer! I wonder who indulged in a few short cuts?

EB: That was a tragic happening but great it was replaced so quickly.

Oh I remember seeing this on the news. Very surreal, no wonder some people are terrified of crossing bridges. I know of one who would really rather go under it (subway) than cross it.

That must have been terrifying especially as you have nighmarea about it anyway. Trust a photographer to get those doc shots though.

Tragic, Its lucky not more people lost their lives, and I can understand how you feel going over any bridge.

Life goes on... new bridge is opened...people forget so quickly. I too am relieved when I get to the far side of a big bridge

You couldn't help but think of that disaster when crossing a bridge, considering how close you were to the event. That was truly a tragedy, and so wrong that the repairs were not made sooner. I'm glad to hear you have a new bridge in place of the old one.

thanks for the reminder. great pics.

Oh i remember seeing this on the tv also. Such a sad time. I think that also prompted officials to check out other bridges all over the country.

That is a tragic story indeed and your photos do tell a sad and sobering story. Thank you.

Amazing pictures. Such a terrible event. The new bridge looks great, it is too bad it took a tragedy to obtain it.

I remember that on the news. And people wonder why some people are afraid to cross bridges. What a horrible day. :-( It's odd to say your shots are great when this was such a tragic moment, but they are very good shots and tell this tragic story.