It was not only birds and bugs that I found at Old Cedar in June. On my way out of the park I spotted a couple of guys tormenting this poor snapping turtle on the road. The turtle had its back to a high curb, the curb was taller then the turtle, and was facing the guys striking at a stick that one of them kept placing in front of it. 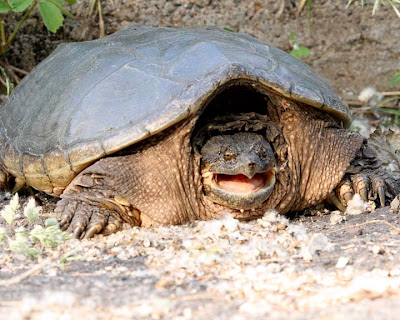 Since I did not want to leave the turtle there to be tormented or worse yet hit by a car and since I was not sure it could make it up the high curb all by itself I waited until the turtle turned to face the guy with the stick and then I picked it up and placed it in the grass on the side of the road. With the no curb to block its way the turtle moved into the brush towards the nearby pond.

After I moved the turtle I read a post on birdchick.blog about female turtle holding water to soften soil when they lay their eggs. I do not know if this was a male or female but since males rarely leave the water I am guessing that it was a female, although when I picked it up it did not spill any water. Perhaps it had already laid its eggs and was trying to return to the water, I am not sure. I tried to find more info about female carrying water to moisten the soil but I could not find anything. Sharon had gotten this information from a biologist. Are there any other biologists or turtle experts out there that can shed some more light on this?
Posted by Ecobirder at 4:22 PM

I remember reading something about that in Stan Tekiela's emailed NatureSmart column. He works for Eden Prairie Park and Rec (as a naturalist I think). You could ask him where he got his info.

BTW- I'm glad you were thee to help the old turtle along. You set a good example for the knuckleheads who were tormenting it.

Don't know much about turtles, except they still fascinate me. Great photo.

I am so glad you helped him out - I never understand what makes someone want to torture an animal that's certainly not going out of its way to bother them!

Good job Eco. I had a similar experience this spring and was leery of picking him up by the tail. Fortunately mine appeared to be about 1/10 the size of your rescue. Yikes.