Not all of the dragonflies and damselflies that I found at Dodge Nature Center in mid June were common ones that I often see. That day was the day that I spotted my first clubtail. Clubtails are named such because of the enlarged, club looking, segments at the end of their abdomen. Clubtails are also one of the few types of dragonflies where there eyes do not meet at the top of their head, they are set more like damselfly eyes. 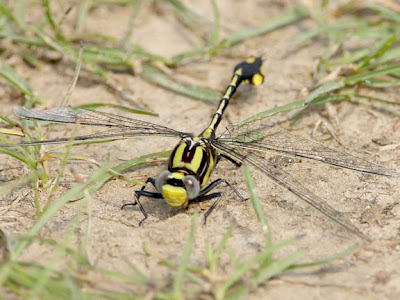 Although this species of clubtail, the midland clubtail, is not listed by the Minnesota Odonata Survey Project as a species of interest, species which are listed as special concern or rarely seen in Minnesota, several others are, such as the zebra clubtail, splendid clubtail, skillet clubtail and the least clubtail. Still this was the first one of this type that I have seen or in birding
world terms it was a lifer. 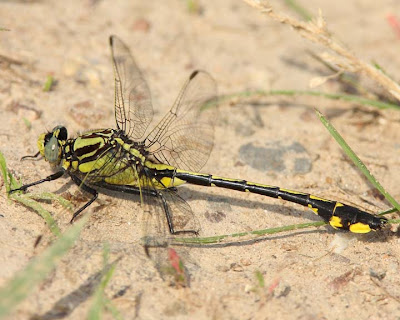 One of the interesting things that I found out about the midland clubtail is that they are large, around 2.2 inches long, and are strong fliers. This allows them to prey on other dragonflies, not only the small species but also dragons as large as eastern pondhawks and twelve-spotted skimmers.
Posted by Ecobirder at 8:34 PM

That is a beautiful Clubtail, Jeff. We have 14 of them here in Sri Lanka out of which 13 are endemic. May I please know what the lens you used for this?

Thanks Gallicissa, from what I have seen you have a lot of really cool dragonflies in your part of the world. I photograph most of the dragonflies with my 100-400 Canon IS lens. This is sometimes difficult because I can't get too close, because of the minimum focus distance of the lens. I do also have a canon 100mm 2.8 Macro lens but dragonflies don't usually let you get that close. I am currently looking at buying an extension tube which I can add to the 100-400 so that the minimum focus distance will be closer.

Thanks a lot for sharing this info! Yes, we do have some cool dragonflies in our part of the world. I am contemplating to take a big leap into dSLR and hence the inquiry. I am eying for Canon 40D & 180mm macro lens.

It looks like a helicopter. I was told I could not add a doubler to my 75mm-300mm, it can only go on a fixed lens. So is the extension tube different? I also have the Canon 100mm 2.8 Macro lens, not able to use it for the dragonflies. Can sometimes for the butterflies, but not usually.