The dragonfly population, which had been some stagnant mostly due to the late winter that we had, seemed to explode in the middle of June. This was a good thing, as the birding had gotten a bit stagnant after the migration and there were few butterflies around to photograph. 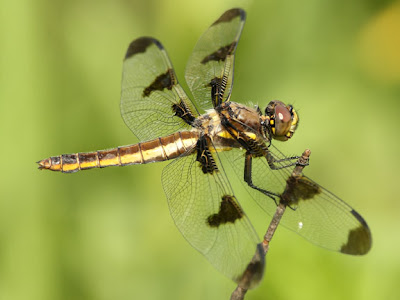 So while I did shoot some bird pix, when I visited Dodge Nature Center at mid month I spent a lot more of my time photographing dragonflies. 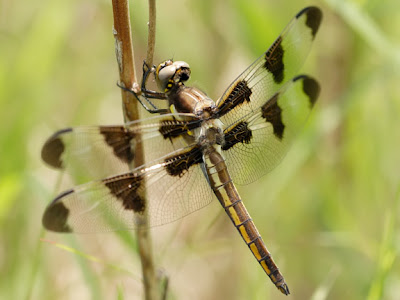 One of the most common dragonflies around the Twin Cities so far this year is the twelve-spotted skimmer. 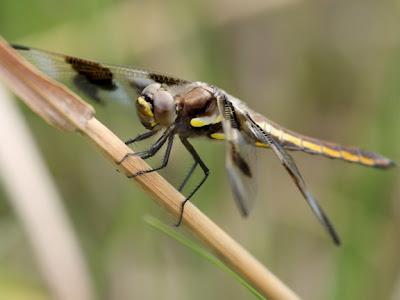 These fairly large dragonflies, up to about 2 inches long, are named for the dark spots on their wings. Each wing has three brown spots for a total of twelve total spots. 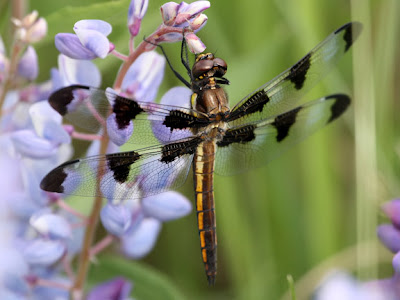 It is usually easy to identify the males by white spots in between the brown spots. The females are a bit more tricky because they have little to no white spots on their wings and resemble the female common whitetail dragonfly. However the twelve-spot females are typically larges and the yellow spots running down the sides of their abdomen line up in a fairly straight line. On the whitetails the yellow spots form a jagged line.
Posted by Ecobirder at 6:59 PM

Great photos. Went looking for deer today and all I got was a Dragonfly, but it was the best photo of one yet. Another species to start trying to learn. Blogging has so much research to it. See why my daughter suggested for when I retire. But, no I took the challenge now. Thought just post a picture a day. How hard can that be? Ha! But I am enjoying it. You trully do inspire me, your photos are so good all the time. Thanks for sharing.

Thanks Leedra, too bad you did not find any deer but dragonflies are great to photograph too. I also try to do a lot of research for my postings. Unfortunately their is not as much information about individual draagonflies as there is things such as birds. Usually just how to ID them, which makes it harder to find interesting facts to go with the pics, but I do enjoy photographing them.

I've become more interested in dragonflies by seeing them on yours & others blogs. Usually when I see one buzzing around my head or landing on me - I'm running from them! Now I'll have to examine them more closely. (They don't bite - right?!)

Great captures. And the info is great also. I agree about it being hard to find specific information about different species of dragonflies and damselflies. Their habits differ so much (such as where they lay their eggs) it takes a while to interpret some of their activity.

And don't worry about any possible bites, shellmo. Despite their seemingly menacing appearance having one land on you is more akin to having a butterfly land on your nose. Just treat it as gently as you would the butterfly and all will be well.

Wonderful! I was trying to find out which dragonfly I took a photo of this weekend... and it too is a huge 12 spotted skimmer (female)

I posted it to my blog yesterday.

They are so beautiful, as are your photos!!