Although damselflies are quite common many people are not aware what a damselfly is. Many people mistake them for dragonflies. Although they are related to, and similar in appearance to dragonflies, there are a few distinct differences between them.

Damselflies are usually smaller and weaker fliers then dragonflies.
The eyes of the damselfly are separated and on the sides of the head while those of the dragonfly are closer together and more on the front of the face.
All four wings on the damselfly are the same size while the hindwing of dragonflies are larger at the base.
While at rest damselflies hold their wings up over their backs parallel to their body, except for the spreadwing damselflies, while dragonflies hold their wings out perpendicular to their body. 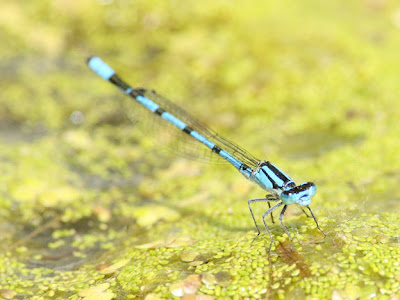 The familiar bluet are a fairly common damselfly that inhabit ponds and other marshy areas. The male familiar bluets, pictured above, have more blue then black on their abdomens with the eighth and ninth segments being entirely blue. The female familiar bluet, the left most damselfly in the picture above, can be blue, tan or greenish with more black on the abdomen then the male, including black on the eighth and ninth segments. 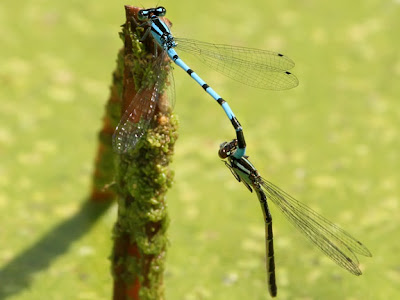 Damselflies mate the same way that dragonflies do. The male begins by transferring sperm from his testes, under the ninth segment, to his hamulus, under the second segment. He then initiates the mating by grabbing the female by her thorax and head. 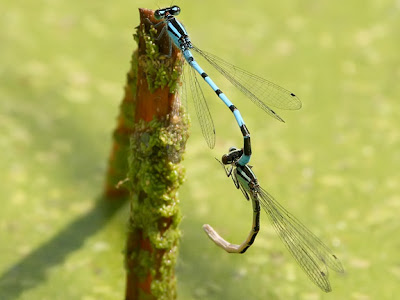 The male then begin to arch his abdomen downward while the female brings her abdomen up to the male's hamulus. This is called a wheel position and it is how copulation takes places. The pair will usually fly to a safe location or some dragonfly and damselfly copulate while in flight. This pair may have been attempting to get into the wheel position or they may have already been laying eggs with the male guarding the female. This type of guarding, where the male holds on to the female, is called contact guarding.

Most of this information came from the Minnesota Odonata Survey Project.
Posted by Ecobirder at 2:38 PM