Another dragonfly that I saw quite a few of while visiting Dodge Nature Center in mid June is the dot-tailed whiteface. 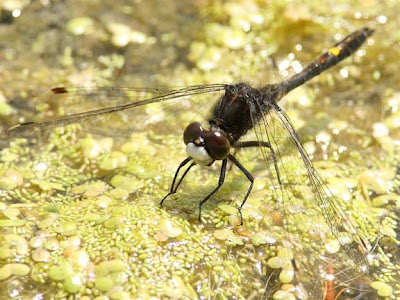 This small, 1 5/16 to 17/16 inches, mostly black dragonfly is a member of the Libellulidae, or skimmer family. They are easily Identified by their white face and the square yellow spot on the top of the seventh abdominal segment. 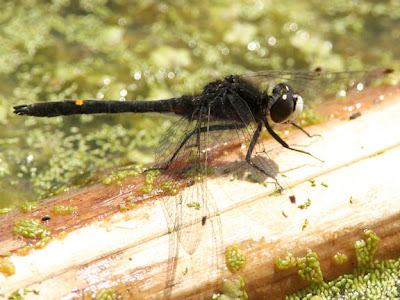 Their preferred habitat is ponds or marshy lakes with heavy vegetation. They are frequently seen perched on algae mats or vegetation along the shore. They often use these perches to hunt their prey, which consists of soft-bodied insect such as mosquitoes, flies, mayflies, moths, and butterflies. 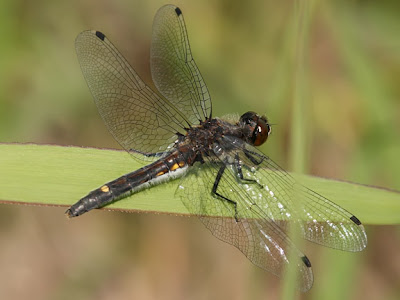 Mating typically occurs while the pair is perched near the waters edge. After mating the male will often guard the female as she lays her eggs by dipping her abdomen into the water while she hovers slightly above the surface. 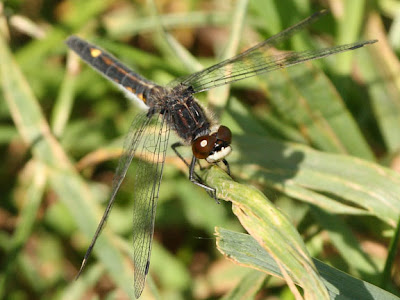 The male guards the female to prevent her from mating with competing males. Typically this type of dragon will watch the female by Hover Guarding. The male will hover or perch near where the female is laying her eggs so that he can attack and chase away rival males. On rare occasions a male may grab a competing male, pretty much the same way that he would hold his mate during copulation, and hold him until the female has completed laying her eggs. This type of guarding is known as karate guarding. 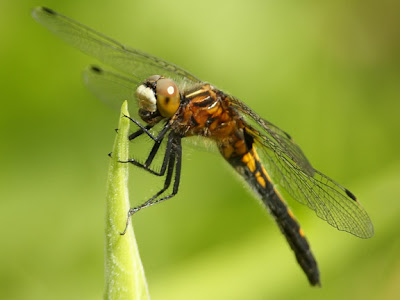 Immature and female dot-tailed whiteface dragonflies often have more then one yellow dot on their abdomen, as pictured above.
Posted by Ecobirder at 3:58 PM

Love the photos and the info, you are just trying to pull me into starting that research on dragonflies. It's birds, butterflies, flowers, and now dragonflies. I am a 'know the name' freak. It drives me crazy not to the know the name of a flower all the way down to the particular bloom of a daylily.I am trying just to photograph the dragonflies, but you are making it hard by giving me details to look for. Keep up the good work!!

Great closeups the last several days! You must be a very patient fellow to get them.

A whole new world out there for you and your audience. I always loved to see the dragonflies appear in the Boundary Waters Canoe Area because then the mosquitos would be in trouble!

Well, I don't think you had seen my dragonfly post (it posted early this morning) when you left your comment on my post. You need to go back, I made a comment about you on my post. This post was ready Thursday evening, just set to post Friday morning. You are pulling me further and further into the dragonfly photos. I don't even think I had ever seen one until this year. The other night I saw one while I was pumping gas around midnight.

Leedra, if you, or any of my readers takes something away from my blog then I consider it a success.Hopefully you will continue to visit and begin to look at dragonflies in a new light.

Thanks Ivars, but I don't really consider my self very patient. Most the time when I go out shooting I am constently moving and searching for more things to photograph.

Right you are TB. Dragonflies are cool to look at, but even more important is the fact that they are great at mosquito control.