To Bee or not to Bee

Back in early 2007, when I first decided to start blogging I spent a lot of time trying to come up with the right name for my blog. It was very important for me to find the right name for the blog so I spent a couple of weeks coming up with ideas and then narrowing the choices down to just a few. In the end I decided on Ecobirder because of Michelle's recommendation. She liked Ecobirder because it described the main theme of the blog, which is birding, but also suggested the possibility of more. The eco portion of the name, which represents the environment, would be my excuse to run around places like Yellowstone, photographing and posting about other things in nature besides birds.

This turned out to be a good thing because last year I found that there are times when birding is not so sexy and it is hard to get the pictures that bring people back. That is when I began to expand and added posts and pics of butterflies and dragonflies. 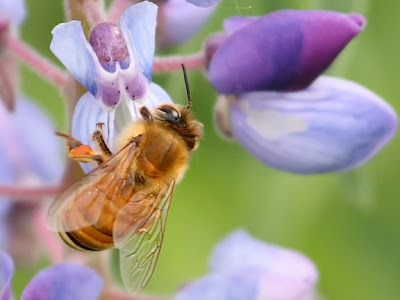 Earlier this year I read an very interesting article in the Audubon Magazine May-June issue about bees. So when I was out at Dodge Nature Center at the beginning of June, and many of the wild flowers were in bloom, I decided that it would be fun and interesting to start taking some pics of bees and include them in the blog. 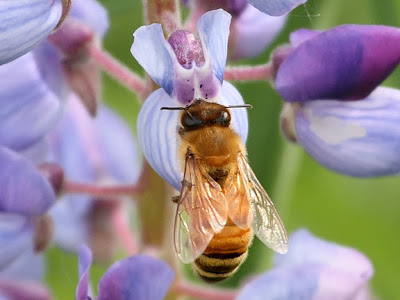 Honey bees like the ones above are very important to the environment. They are one of the primary ways that many plants get pollinated. Unfortunately over the past few years there has been a mysterious rash of honey bee colonies colapsing and dying off. No one knows for sure why this happens, although there are several theories, but it has a lot of people worried about possible food shortages in the future if the honey bee population continues to decline. 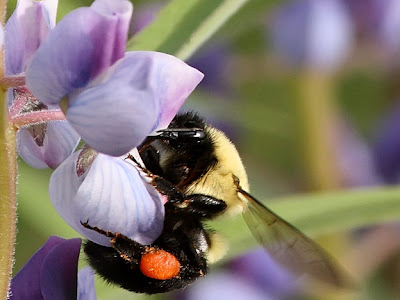 The article in the Audubon Magazine is about a study by researchers at Princeton University as well as visiting researcher Rachael Winfree into how much pollen is spread by native bees as compared with honey bees. They hope to find out if native bees, like the bumble bee above, can pick up the slack, or even replace if necessary, the honey bees if they continue to decline. You can read the article here. 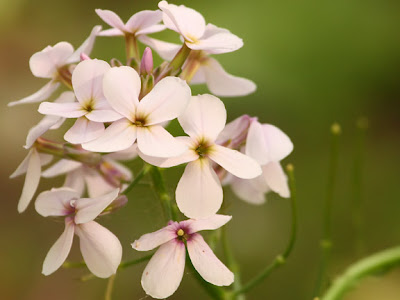 Now that I have started to include bees on the blog what can be next, wild flowers?
Posted by Ecobirder at 10:20 AM

I avidly follow the adventures of several bee keepers, including Laura (http://laurawhittemore.blogspot.com/), who cares for Mason Bees! I’d love to do the same, and will one day; I’ve been doing research:

But in the meantime I get to look at pictures like yours. I love the info you give us, too. Good job, Ecobirder! (great name, too)

There are some good links there, too!

Thanks Beverly. I do not know very much about bees yet, except that my brother is pretty illergic to them, but all of these links will give me a great start.

Ecobirder - I look forward to your other topics & photos of bees (I really got hooked reading birdchick's blog about bees) and wildflowers. The photos are great and the info always relevant.