We did see a few other birds in Yellowstone that we do not see back in Minnesota. 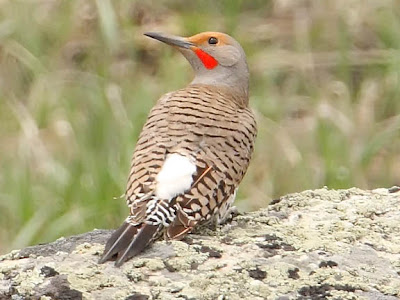 We do have northern flickers in Minnesota however the ones that we usually see are the yellow-shafted variety compared to this one which is of the red-shafted variety. The differences between the two types are the yellow-shafted has a yellow tint on the underside of the wings and a red crescent on the nape of the neck. Yellow-shafted are prevalent in the eastern portions of North America. The red-shafted version, which is prevalent in the west, has a reddish tinge to the underside of the wings and a red malar, as you can see above. 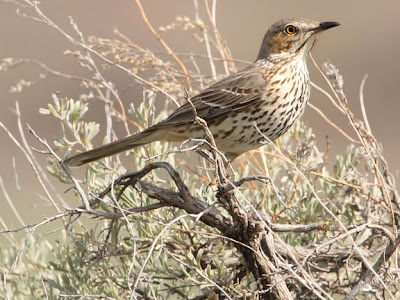 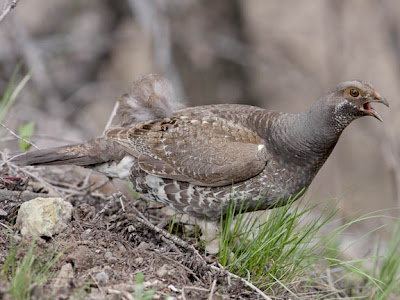 We found this female blue grouse as we were driving back from the Lamar Valley on Tuesday evening. She was very territorial. When we drove up she was in the road chasing away cars. I was worried that someone might hit her so I got out to try and coax her off of the road. Then she began to follow me around. She followed me for a while which attracted several other people to stop. Finally she quit following me and we got her off of the road. We did not see her again for the rest of the trip. Hopefully she learned that it is not wise to chase cars.
Posted by Ecobirder at 12:19 PM

As I've been following your Yellowstone adventures I'm beginning to think I need to go out there in the spring rather than summer or fall as I usually do.
troutbirder

I love all these wonderful creatures you are sharing w/ us from yellowstone. Do you think the grouse developed a crush on you? Ha,ha!

Maybe Shellmo. Last year we saw a different bird following a photographer around over by Tower so it seems to be a common thing.