An Elk is Born in Yellowstone

Most people who visit Yellowstone do not get the pleasure of seeing elk calves at the time that we typically visit. We have been very fortunate and have seen calves 3 out of the 4 times that we have visited in the springtime. The reason why we don't expect to see elk calves is because of the time and way in which they are born. 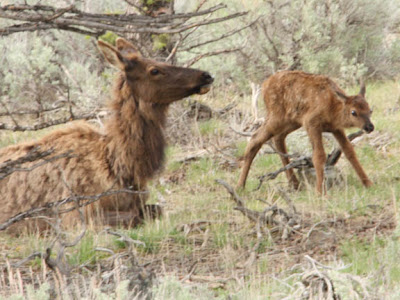 Elk usually begin to calve at the end of May or beginning of June. When they calve the female will go off on her own to have the calf. The new born calf is able to stand and walk, although wobbly, shortly after it is born but it takes time before they are able to run. 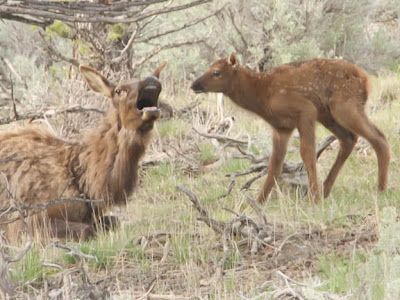 The newborn calves are very susceptible to predators like wolves, coyotes and bears at this point, so the mother and calf stay secluded until the calf is strong enough to flea from any predators that may attack. This seclusion usually lasts around week. While they are secluded the calf spends most of its time eating, sleeping and strengthening its legs. 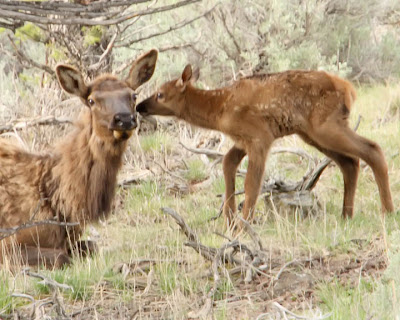 Every time that we have seen elk calves it has been on the Friday before Memorial day, which is the last full day that we spend in the park. This year I did not think that we would get to see one. It was late on Friday and we were starting on our way back to our hotel from out at the Lamar Valley. It had been a great day, we had spotted the prairie falcon and wolverine that day, and a great trip so I was not too disappointed that we had not seen an elk calf. As we drove on to the Blacktail Deer Plateau we saw a small group of photographers on the side of the road. We could not see what they were looking at so we continued down the road to a large turn out that was filled with cars. We asked someone there what everyone was looking at and found that an elk had recently calved under the trees back where the photographers where. I grabbed my equipment and headed down the road. The elk and calf where a pretty good distance away but were close enough to get these shots. In the past years I have been fortunate to be closer to elk calves but there is no way that I was going to get any closer and possibly stress out the mom or baby. In talking to the other photographers there I found out that the calf had been born between 30 to 60 minutes before we arrived. These pictures are of some of its first steps.
Posted by Ecobirder at 3:31 PM

It is always exciting to be there at the beginning.

Amazing to see - I have a soft spot for elk! (I took photos last week in northern Michigan - now I'm upset I didn't look closely for babies!)

Thanks Leedra and Shellmo. I was very happy that we got to see an elf calf again this year. We were dissapointed not to see one last year but I think that it was because we left a day early in 2007.