Despite the cold and all the snow in Yellowstone this year we still managed to find ourselves some shorebirds. We located this spotted sandpiper at the confluence where the Soda Butte Creek joins the Lamar River. 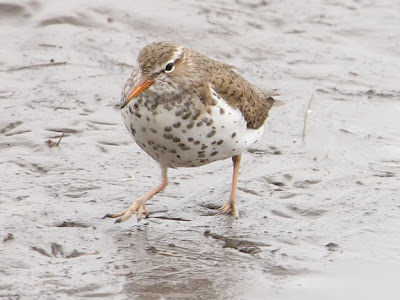 I had actually stopped to photograph the three Barrow's goldeneye, 1 male and 2 females, that were swimming in the river. It was not until I was out on the side of the river shooting the goldeneye when I noticed movement on the opposite bank. There in the grass and mud was the first true shorebird that we have ever witnessed in Yellowstone. 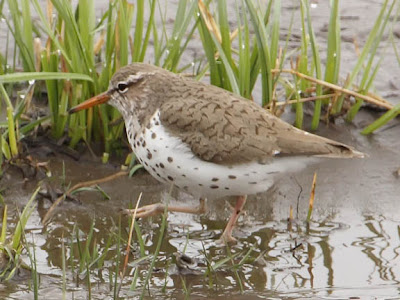 This is most likely a female and she is probably staking out her breeding territory. The male and female look similar but the female is usually bigger and the spots extend further down her belly. You can tell that she is in breeding plumage because of the dark bars on her back and the fact that her legs are pink and not yellow, as they are when the birds are not in the breeding season.

The spotted sandpiper is different then most birds, in that the female arrives at the breeding ground first and then stakes and defends a territory, in most other birds it is the opposite. Later, when the males arrive, the female will often mate with several males, up to 4, and lay a clutch of eggs for each male. It is then the male who incubates the eggs and cares for the young.
Posted by Ecobirder at 4:56 PM

Beautiful! I've been at this exact spot many times but always with a flyrod in hand. Now if my spouse would let me hang her Canon around my neck when I'm in the water!