While I did take quite a few dragonfly pics at the Dodge Nature Center, when I visited in mid June, I did get a few bird pics too. 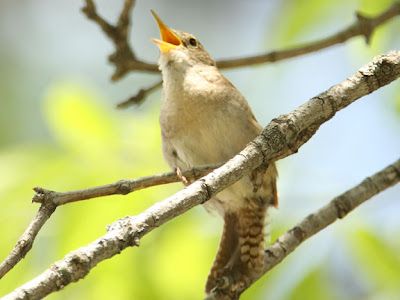 Even though house wrens have a cheerful bubbly song they can be very aggressive and territorial during the nesting season. They will often work hard to prevent other cavity nesters from nesting in or near their territory. This may include filling empty potential cavity nesting sites with sticks or even breaking the eggs of other birds. 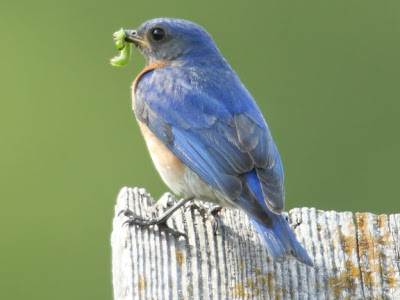 At Dodge there seems to be enough room for the house wrens and eastern bluebirds, a competing cavity nester, to coexist. The bluebirds seem to occupy at least one of the bird houses. Inside they will build a nest made of grass, sometimes they use pine needles however there are few pines in the area so they are most likely using grass, and line it with fine grass and feathers. The clutch is typically between 3 to 6 eggs which will hatch in about 12 to 18 days. The young fledge in about 17 to 20 days, sometimes the male will continue to feed the fledglings while the female begins another nest. 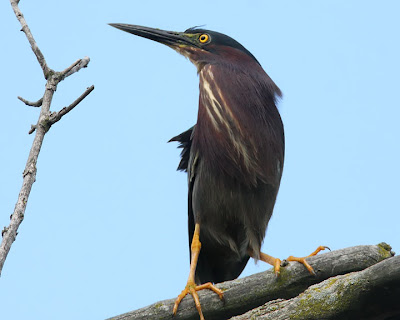 Over looking one of the many small ponds that are part of the nature center I found a green heron. Green herons spend much of their time foraging for small fish, frogs and insects at ponds, rivers and other marshy areas. A clever bird, they will sometimes drop bait, like worms, sticks or feathers, on to the water to attract fish or frogs to come to the surface. 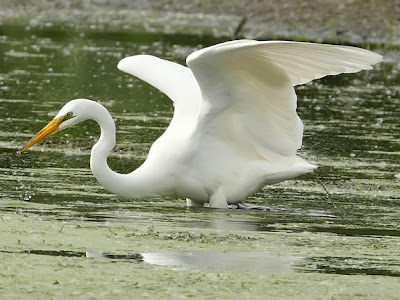 I also spotted another member of the heron family at another pond. The great egret hunts its prey, mainly fish, frogs and reptiles, by stealthily wading through the water until it finds something to eat. At that point it will slowly move into position and then lunge forward with its beak to impale its prey. 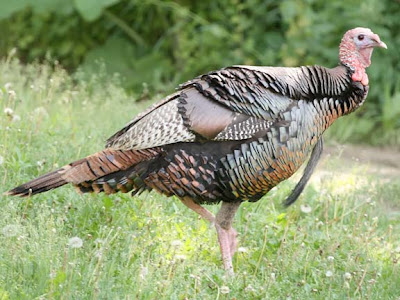 Dodge has a pretty good population of wild turkeys. Last fall I found about 30 of them on one visit, most of them were females with only a few toms. On this trip their were 3 toms in the field right behind the headquarters building. Turkeys are not what most people would consider a beautiful bird but I like the way that they look in the sun light, their feathers get an almost metallic look to them.
Posted by Ecobirder at 4:33 PM

We have turkeys across the road from us, sometimes a hundred at a time. Just can't get close enough to photograph, due to guardrail, deep ditch and then the tree line. By now I am sure you know the Bluebirds are my favorite, and this is a good one.

I think that turkeys are gorgeous too Lynne but I have to admit my favorite turkey sightings are on Thanksgiving between the cranberries and the mashed potatoes.

Bluebirds, on the other hand, are also gorgeous but I honestly have never tasted one. But I am sure that is not what you meant Leedra.

Hi, could I have permission to use your turkey photo for the newsletter of Cedar Lake Park Association, over in Minneapolis? They are including photos from the prairie area along Cedar Lake Trail, and turkeys are one of the birds that are often seen there, but they don't have any photos.

Thanks for considering it.