Every once in a while I am fortunate enough to get some time off on a Friday. On those days I like to head over to the Carpenter Nature Center to check out the bird banding. June 13th was one of those days, unfortunately it was also a bit windy that day so there were not many birds that were being caught in the nets. When it is windy the nets blow in the wind and the birds spot the movement and thus more of them avoid the nets. 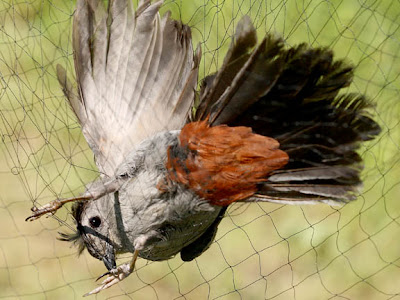 In the hour and a half that I was there I only spotted this gray catbird in the nets. The interesting part of banding is that you get to see birds up close and at angles that you typically don't see in the wild. For instance it is not often that you get at good look at the rufous undertail coverts of the gray catbird. 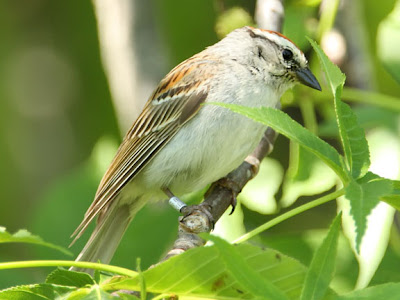 Since there were not many birds in the nets I decided to take a walk around the grounds to see what I could spot. Chipping sparrows are quit common in the area right now, as are eastern kingbirds. 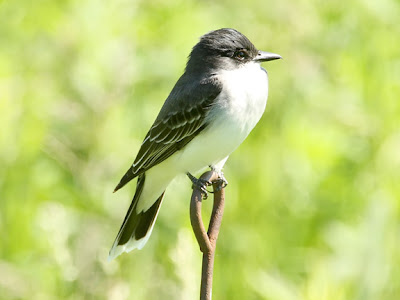 With all the flies that we have around this year it is no wonder why a lot of fly catchers,like the eastern kingbirds have decided to stay in the area instead of heading farther north. 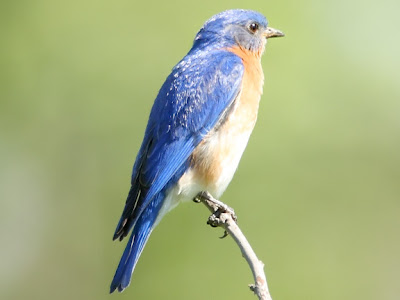 There were also several eastern bluebirds around Carpenter. I think that they are nesting in the boxes that they have out in the fields. In an earlier post I mentioned that I have seen a lot more eastern bluebirds in the area then I did last year. Maybe the high bug population this year, except for butterflies which appear to have declined this year, has helped to make them more successful in the area.
Posted by Ecobirder at 8:57 PM

I have seen several birds in our area for the first time. I saw a Flycatcher yesterday and today. Have not quite narrowed it down, but was thinking Eastern Kingbird, and looking at your photo, think it might be. Hopefully will figure it out and post soon. We are having more butterflies than last year. Just my 2nd summer at this location, so my flowers are just getting going good, might be part of the reason. Great photos, and information. Thanks.

Enjoyed all the photos today!

Thanks Leedra and Shellmo. You are lucky Leedra to be having more butterflies. Last year I photographed tiger swallowtails and a freind of mine raised black swallowtails from eggs that were laid in her parsley. This year I have seen a couple tigers but not long enough to get a pic and I have not seen any blacks at all.