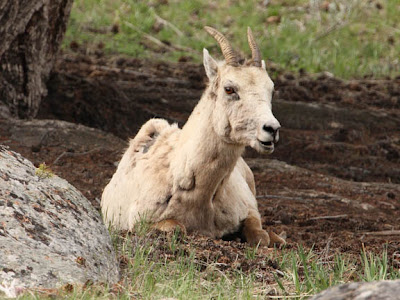 The first sheep that we came across was on our first day in the park. It was in an area where we have seen big horn sheep in past years between Roosevelt Junction and the Lamar Valley. There were 4 or 5 ewes laying in the grass not far from a picnic area. 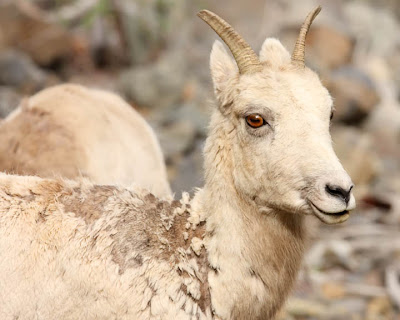 Later in the week we were on our way up to Tower when we spotted a lot of people along the road near Calcite Springs. Since this is where Rosie was usually located with her cubs I decided that I wanted to stop and take a look. Unfortunately there were no parking spots. So I grabbed my equipment and asked Michelle to drive up to Tower and turn around and then come back and see if she could find a spot. It turned out that Rosie and cubs had gone out of sight over a hill so I decided to start walking up to Tower to find Michelle and the car. On the way there I looked over the side of the cliff and spotted three big horned sheep. 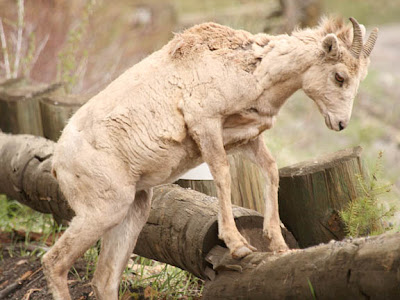 While I was photographing the sheep Michelle came driving up. I pointed out the sheep but she told me that they had crossed the road in front of her when she was driving to Tower and she snapped the picture above as one of the sheep scrambled over the railing. 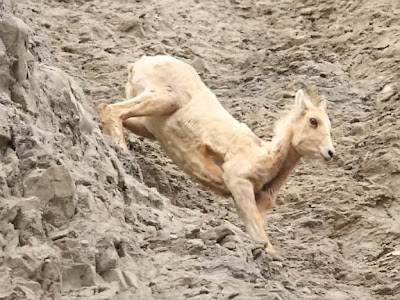 When we were leaving the park on Saturday we scanned the cliff near the north entrance on our way out because there had been a golden eagles nest in that location a couple of years ago. We did not see a golden eagle but we did find another big horn sheep up on the cliff face. 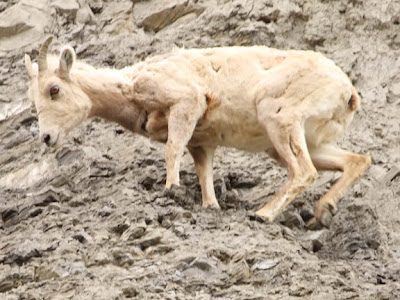 Although we had already taken big horn pics earlier on the trip I was fascinated by how this good sized animal could be scrambling around on tiny ledges that looked to be only a few inches deep. 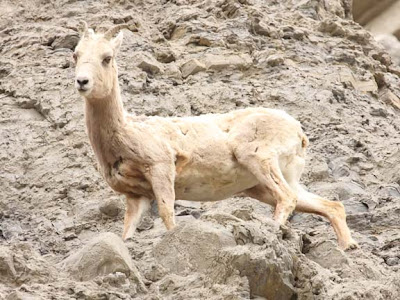 As it walked across the cliff face I could see dirt poor down from where it was stepping. I could swear that any minute the ground below the animal was going to give way plunging the animal 50 feet down the cliff. But it never happened. The animal was sure footed and never seemed bothered by the loose rock beneath its hooves or the dizzying height of the path that it was walking. I think that it bothered me a lot more then it did her, probably due mostly to my own fear of heights.
Posted by Ecobirder at 2:44 PM

It is amazing to witness their talent of balance and coordination in your photos!