While I was out birding near Black Dog Lake last week, March 26th to be exact, I spotted a pair of belted kingfishers. 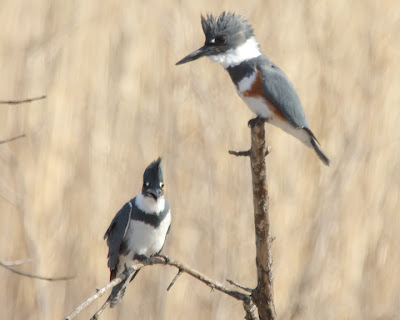 I was pretty excited because I have always had a problem photographing kingfishers. They are one of those types of birds that always seems to take off just as soon as I get my camera set up. 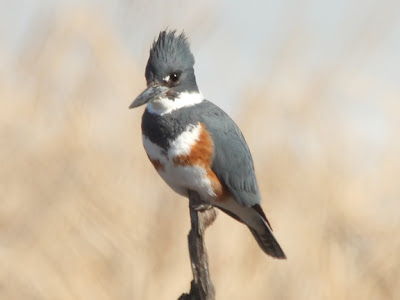 This time I got lucky. Even though both birds took off from their perch while I was getting set up the female landed close by and stayed still long enough for me to get some nice pics. 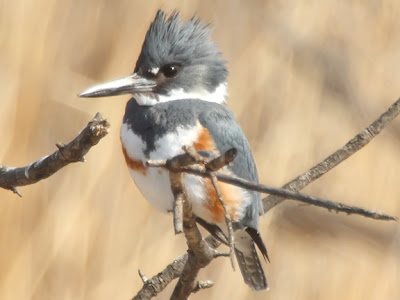 I did not see the male much after it left its initial perch but that was OK with me because the belted kingfisher is one of those rare birds where the female is actually more colorful, and in my opinion better looking, then the male. 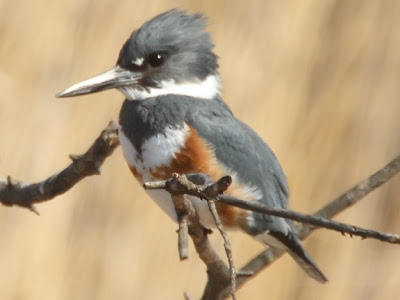 This appears to be a nesting pair, which hopefully means that I will have more opportunities to get kingfisher pics. Kingfishers nest by burrow in to a dirt bank near to water. This swampy area, which is near to both the Minnesota river and Black Dog Lake would seem to be a very favorable habitat for these birds.
Posted by Ecobirder at 9:28 AM

Was this around the west sluice gate? A female spent the winter there this year, but I never saw a male.

John, I was thinking about the pictures that you took earlier in the year when I saw them. They were in the marsh area that is part of Fort Snelling State Park. I have looked for them again a couple times but have not had any luck but I guess that they are some where in the area.

Love these photos! Tough to get close to these guys!

Those are swell pictures of very neat looking birds! (I saw my first one of 2008 just last weekend).

Thanks Hannibal and Ruthie