Another one of the birds which are pretty common here during most of the year, except for our insane winters, is the great blue heron. The herons began to return to the area at the end of last month. 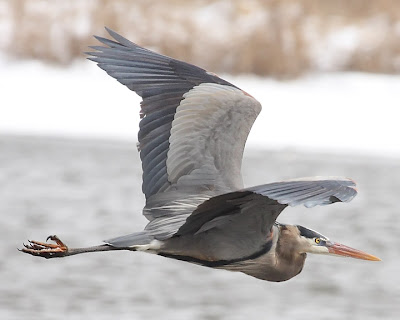 I took my first heron picture of 2008 at Black Dog Lake on March 24th. This was one of about 7 birds that was on the ice, in the lake or flying above the lake. 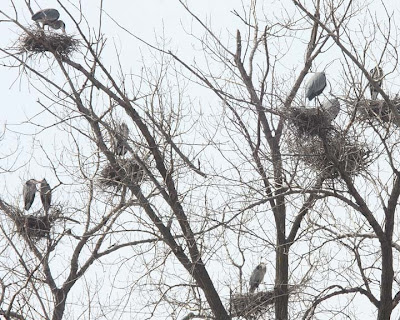 Later that week, March 30th, I made a trip to see the heron rookery at Coon Rapids Dam Regional Park. When I arrived at the park I stopped at the visitors center and asked the woman at the information desk which direction the heron rookery was. She just stared blankly at me, like I was from another planet, and told me that she did not know. 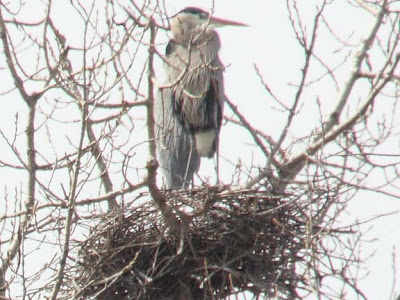 I had to do a little bit of searching but I finally found the rookery. It was located on an island in the Mississippi River. Many of the nests were already occupied by heron couples who were settling in. However, as Sharon Stiteler AKA Birdchick reported, not all of the nests occupied by herons. 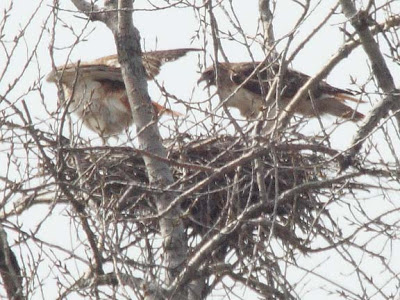 I did not see the great horned owl that Sharon spotted nesting but I did snap a couple pictures of the red-tail hawks in the nest. The red-tails did not seem to bother the herons too much. 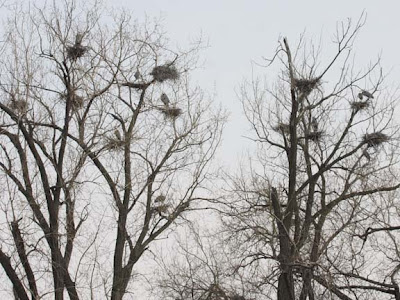 Then yesterday I decided to check out the rookery at the North Mississippi Regional Park. This rookery was also located on an island in the Mississippi, but fortunately for me, this island was quite a bit closer to shore. 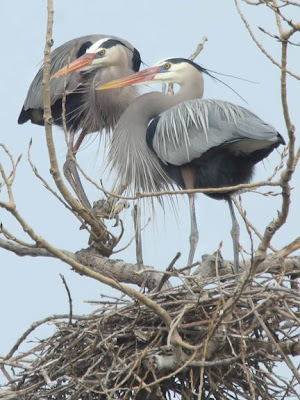 This allowed me to get much better pictures of the nesting herons then I was able to get at Coon Rapids Dam. 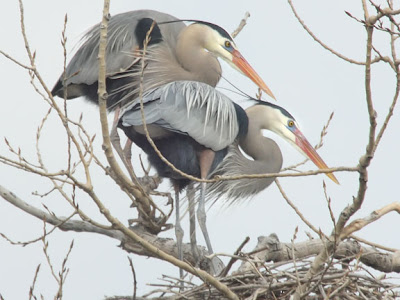 This was the first really nice day of the year, here in the Twin Cities. The sun was shinning, for the most part, and the temps were up in the 50s. 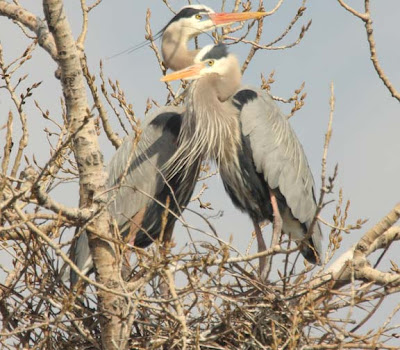 The herons seemed to appreciate the nice weather also. Most of them were busy with their courtship and mating rituals. The feathery tendrils on their long necks and back, as well as their bright orange beaks, are indications that this is heron breeding time. 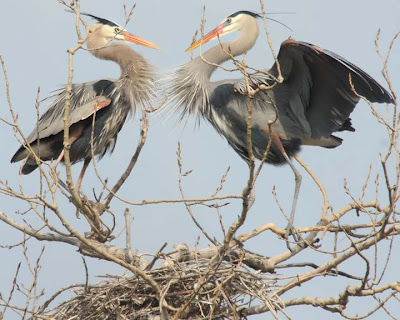 As a part of the courtship and breading ritual the herons will build a nest or repair and add on to an existing nest. 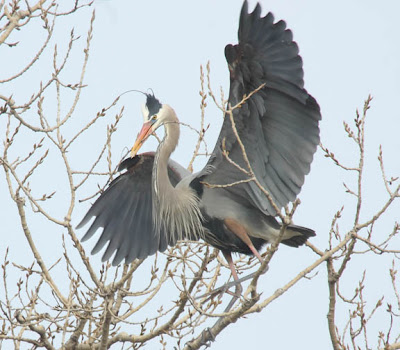 The females job is to remain on the nest, tidying it up and keeping any squatters from moving in and taking over. Meanwhile it is the males duty to search out the neighboring country side for suitable sticks to bring back to the nest and his mate. 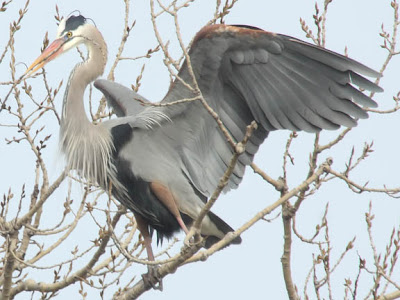 If he does a good job, and brings back a really good stick, well he might just get lucky. 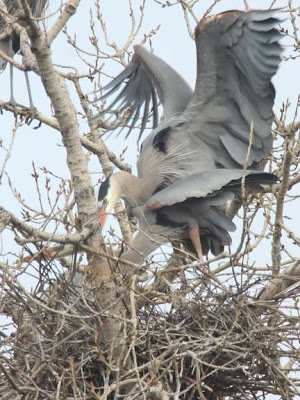 Herons typically lay a clutch of 3 to 5 eggs. The eggs, which are incubated by both parents for around 25 to 29 days, hatch asynchronously over a few days. The prehistoric looking chicks are fed by both parents through regurgitation. After about 60 days the young will fledge but the parents will continue to feed them for another few weeks. After the nesting season the male and female will each go their separate way and each will find a new partner the following year.
Posted by Ecobirder at 4:39 PM

Beautiful pictures! I was at the North Mississippi Regional Park heron rookery last Friday. There was a dead heron hanging high in the branches among the nests. Any ideas about how it would have died?

Thanks to Sharon Stiteler, my wife and I also visited the Coon Rapids Dam regional park on that Sunday to check out the rookery as well. We sat down by the river on the rocks that were laid out like steps and got some decent photos (not as good as your) specially with the lens we seen you carry. We were parked in the lot between the river and Cenaiko Lake I think we recognized you walking along the river carrying that huge lens.

Again compliments to the photos.

Wow, Ecobirder, those are wonderful pictures of the Great Blue Herons. I had no idea their breeding plumage was so beautiful!
Thanks for sharing these photos.

Absolutely beautiful heron pictures......I live in Arkansas and saw "my heron friend"....a returning great blue come back this week to a creek and pond near our house.....amazing birds....so I was reading a bit about them this evening and came across your blog. Thanks for the gorgeous visions.

I echo Richard's remark -- they look like Audubon paintings!

Thanks everyone. Lynne I am not sure what could have happened to the dead heron. Mike and Lizette I jhope that you guys enjoyed the herons. You might want to try the rookery at the North Mississippi Recreational area for a closer look. Ruthie like many birds herons are extra special in breeding plumage. Richard and Penelope I can not take credit for how beautiful the birds are I just take the pics but thanks for the compliment.Gina welcome I hope that you took a look around and come back again in the future. Thanks Hannibal.