My birding expedition on Sunday began at Black Dog Lake. Much of Black Dog Lake does not freeze during the winter, due to the Excel Energy Plant that is located there, so while many other large lakes still had a lot of ice on them Black Dog was primarily ice free. This makes it one of the best spots around to see migrating waterfowl and this Sunday did not disappoint. 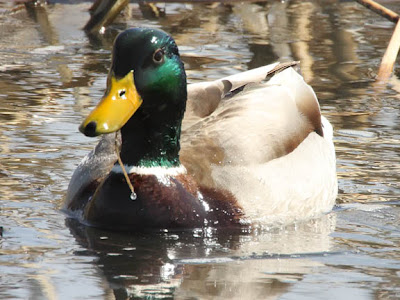 There were of course the usual mallard ducks out dabbling in the shallow waters. 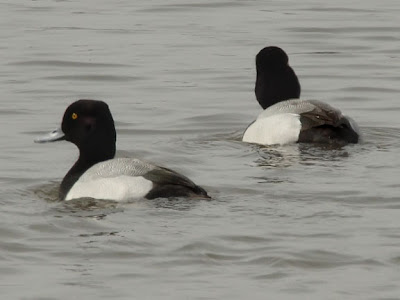 They were joined by lesser scaups. 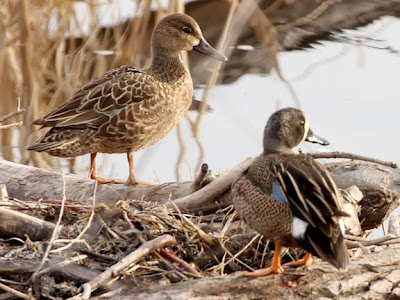 There were also a few pair of blue-winged teal. 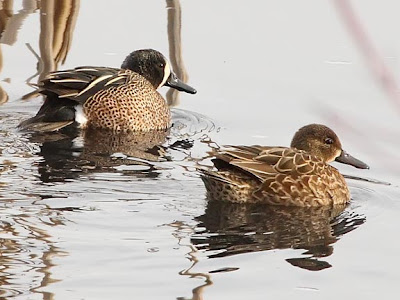 The teal were located in the marsh that is east of the lake and actually a part of Fort Snelling State Park. This area has become a very good wetland area due mainly to beaver activity. I am going to try and get some beaver photos this weekend so that I can do a post on them. Since beavers work mainly at night it may be a challenge but I think that it will be worth it. 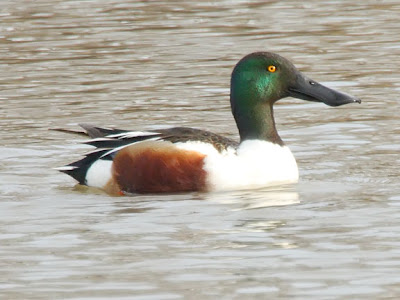 On the east channel to the river there were a couple of northern shovelers. 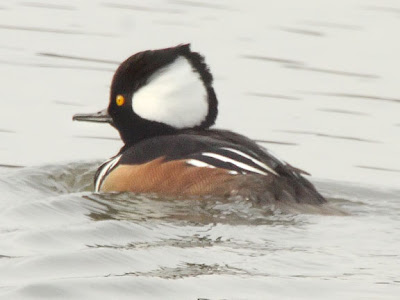 As I walked on the path that run along the lake from the east channel I startled a hooded merganser who swam away from shore with his hood in full display. 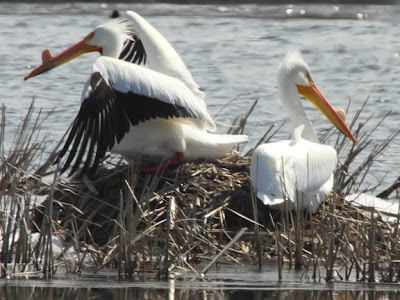 After I finished at Black Dog I crossed the river to check out the waterfowl at the old Cedar Ave Bridge. From the observation deck that goes out a little way over the overflow area of the Minnesota River I spotted quite a few ducks and mergansers but most were too far away to get any good pics. One exception was a group of white pelicans that had stopped over to rest on a shallow part of the river. 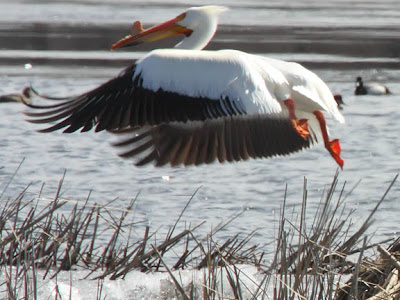 The shallow spot which they were roosting on was not that far from the observation deck so I was able to get some pics. Notice the notch on the beak which is an indication that it is the breeding season.
Posted by Ecobirder at 5:15 PM

The lesser scaup photo is a nice example of the head shape that distinguishes lesser from greater. Some great shots!

Great shots -- especially of the pelican. When will we see your Great Blue Heron photos?

Thanks Kirk, I usually have a hard time telling the difference.

Thanks Ivar, hopefully I will get the heron shots up soon but I took so many last weekend that I am still working on getting them posted. Your heron pics were great though.