Even though the weather was pretty bad last Friday I decided to do a bit of birding after work anyway. It had been raining or snowing all week and besides for a quick trip Wednesday after my shift at The Raptor Center I had been cooped up all week. Since it was still raining or sleeting or raining some more, I decided to go over to the Minnesota Valley NWR visitors center wher I could shoot pictures of birds at the feeders from inside instead of running around and getting my camera all wet. 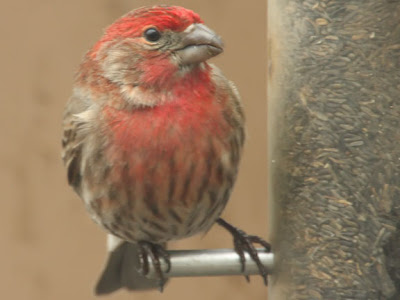 It was pretty busy at the feeders but the low light made taking pictures difficult. Instead of taking pictures of many of the same types of birds that I have been photographing all winter long only in ugly gray light I decided to mostly just watch the action. 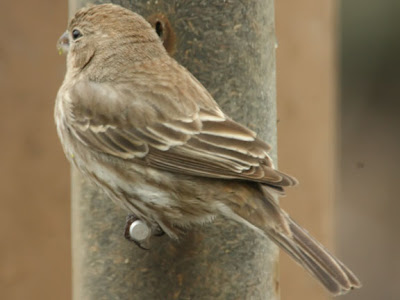 There where a couple of types of birds that I have not had the opportunity to shoot to much so far this year that I did take a couple of shots of like the male and female house finchs above. 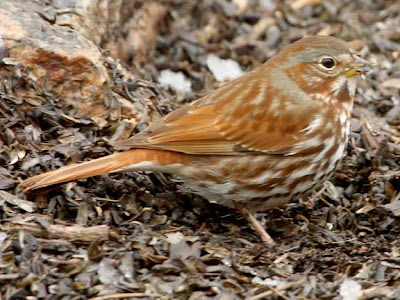 There are also quite a few fox sparrows around right now. It is fun to watch them dig up old leaves and ground looking for burried treasure. Hmmmm I wonder if Jack Sparrow was a fox sparrow.
Posted by Ecobirder at 4:04 AM

Do you know how common are the house finch orange and yellow variants? We have an orange one at our feeder now, and it's the first one I've ever seen.

John, I am not sure how common an orange house finch is. I don't believe that I have ever seen one except the pictres that you have posted on weekend shooter.