Last Thursday while I was wondering around the North Mississippi Regional Park looking for the heron rookery I had a pleasant surprise. I started off down the path that runs along the river, like the directions on the MOU list server stated, but I was going the wrong way down the path. I headed north along the river from the interpretive center instead of south. It was not really a bad thing though because sometimes a mistake can turn into blessing in disguise. On this afternoon the sun was warm and it was the first really beautiful day of spring. As I walked I spotted some pied grebe on the river, first of the year, some hooded mergansers, a phoebe, first of the year, and an old brown leaf. 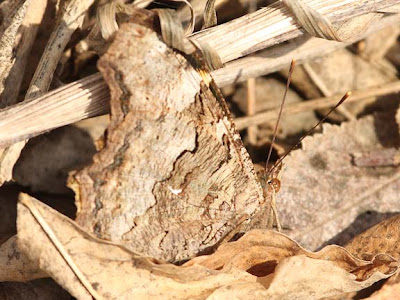 A Brown leaf? Wait a minute that is not a leaf that is actually a eastern comma butterfly and the first butterfly which I have seen in 2008. Don't you just love its camouflage. 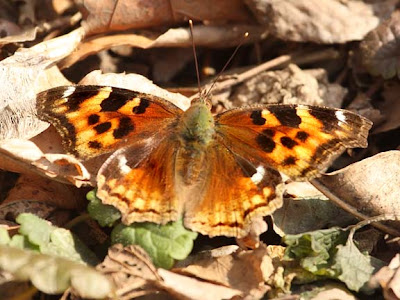 Now some of you who live in a warmer climate are probably thinking, "So what" right about now. Well I live in Minnesota, just in case you have not been paying attention, and 3 days before I took these pics we had temps below freezing and blizzard like conditions as we got over 8" of snow. I did not expect to see any butterflies until the end of the month or more likely May but there it was right in front of me. Good thing that I went the wrong way. 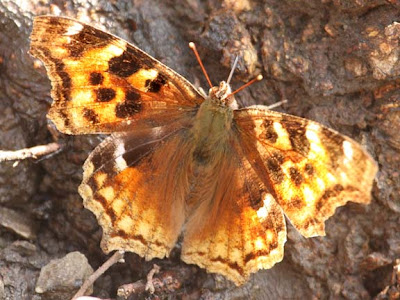 The following day, last Friday, I saw my second butterfly of 2008, a mourning cloak, at Wood Lake Nature Center. I followed it for a while but it did not land. Instead it flew up and over the tree line so unfortunately no picture, but spring has just begun so I am sure that I will have more chances. Today the butterfly cage that I ordered came in. It is made of pvc and netting and is about the size of a 38 gallon aquarium. That should give me plenty of room to raise monarchs, black swallowtail and maybe even order some painted lady caterpillars too. My plan is to set up a web cam or two so that I can get pictures of all the different stages since last year they always seemed to hatch from their chrysalis while I had my back turned.
Posted by Ecobirder at 7:52 PM

If you don't mind my asking, from where did you order your butterfly cage?

That would be the same day that I saw my first-of-season butterflies in WI. Didn't get a good look at them, but they were about the right color and shape to be fritillaries. Quite a few bees were out too. Gulls even showed up at the lake today even though its still mostly covered with ice.

Lynne here is the website that I ordered it from. They have all sorts of supplies. http://educationalscience.com/butterflyfarmkits.htm
Scott, I am sure that you are just as sick of winter as we are over here in MN. It's cool that you are starting to see butterflies too. I have seen many gnats and a wooly bear caterpiller but no bees yet. I am glad that the insects are returning because it gives me a little more variety to share with my readers.

Amazing camouflage, and how you ever saw that is VERY lucky...Congrats!

Neat butterfly pics! I'm glad you got out to enjoy a beautiful day.
Looking forward to your upcoming butterfly raising adventures.

Thank Hannibal, I really only found him because I saw him flying. When he landed he sat wings folded for a while like he was checking to make sure that the coast was clear before he opened his wings.

Thanks Ruthie, I am glad that I got out too because the weather this past week has been horrible.

Super late to comment...I saw this page when I did an image search for Eastern Comma, but the butterfly is not an Eastern Comma...It is a Compton Tortoiseshell! I don't know about where you live, but where I am (in Rhode Island) that's a much cooler find! Eastern Commas don't have those white spots on them.