I did also find some birds at Fort Snelling State Park on April 20th. 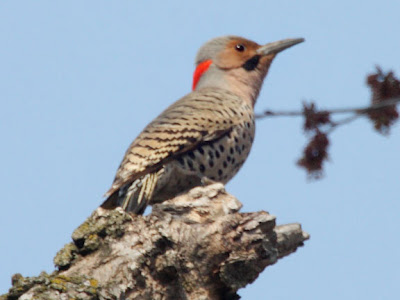 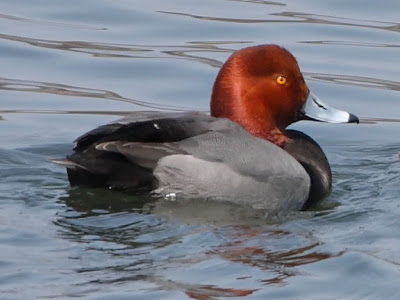 Male redhead ducks are aptly named and easily identified, especially in breeding plumage. After the mating season is complete the males fly to large lakes, typically further north, where they group together. At that point they go through a molt which leaves them flightless for about a month. After the molt they appear pretty much brown all over but still maintain a red tinge on their heads. 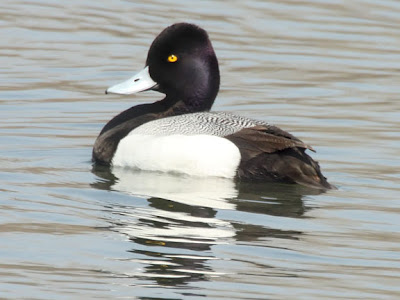 Unlike its cousin, the greater scaup, the lesser scaup can only be found in North America. It is difficult to tell the two apart unless you have them right next to each other for comparison. However since the lesser scaup prefers fresh water, while the greater prefers saltwater, most of the scaups that we see here are lessers. From what I have read the best trait to use to identify whether you are looking at a greater or lesser scaup is the shape of the head. Lesser scaups have a thinner more rounded head then the greater do. My guess is that this was a lesser. 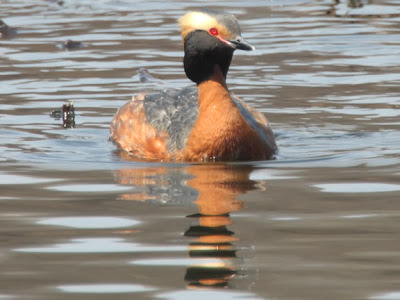 The horned grebes have been out in full force lately. Maybe it is just me, but it seems as though there are more horned grebes around this spring then normal. 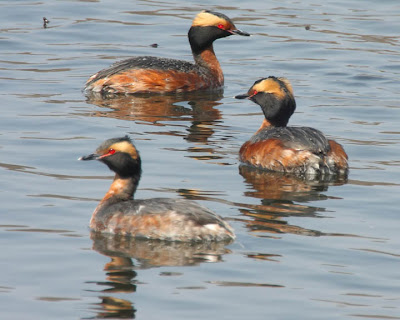 A group of grebes, like the one pictured above, is not called a flock or a kettle it would be called " a water dance of grebes" 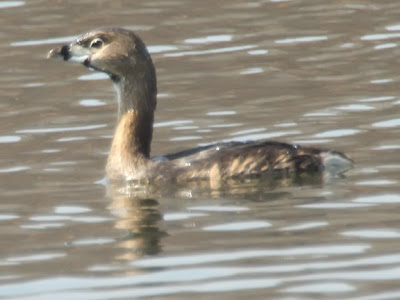 Another grebe that I spotted for the first time this year is the pied-billed grebe. Typically I have seen more pied grebes, around home, then any of the other types, but this year I have seen a lot more horned then I have pied. 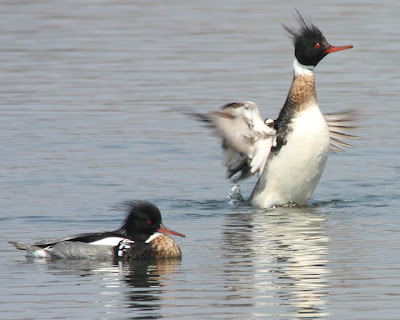 Another bird that seems to be more numerous this year, at least where I live, are the red-breasted mergansers. 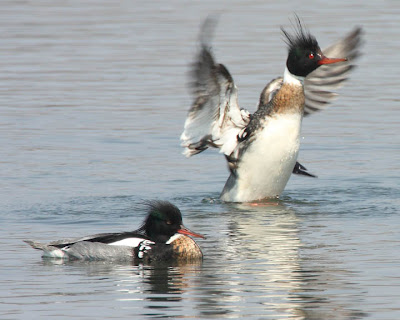 These birds are coming from winter grounds on the east or west coast of North America, as far south as Mexico, and are heading to their breeding grounds in the Arctic and Subarctic regions of Alaska and Canada.
Posted by Ecobirder at 5:26 PM

Fantastic pictures as always. Have you ever done a post on your camera equipment? I'm collecting information for an upgrade.

I'd agree that it is a lesser scaup. The head is round but you can see a kind of flat spot on the back so there ends up being a pointed spot where the round part and flat part come together.

Thanks Richard. I have always meant to do a post on my equipment but have not gotten around to it. All the pictures shot since Septemeber were shot with a Canon 40d before that I used a Canon 20d. The lens that I have been using is Canon's 100-400mm 4.5-5.6 IS lens. However I just recieved my new Canon 300mm 2.8 IS lens today so I am hoping that it will help me get some better pics.

Ugh, Coopers and Sharpies! I was at lake calhoun this morning and saw one of the two, I think a coopers, fly overhead with a song bird (looked like a sparrow) in its talons. It perched in a tree right above me before taking off across the street to eat. Very cool. There were horned grebes at Lake Calhoun too and a black throated green warbler.