Another first of the year for 2008 that I spotted at Black Dog Lake on March 24th were ruddy ducks. I found a small flock of them near a flock of coots in one of the channels between the lake and the river. 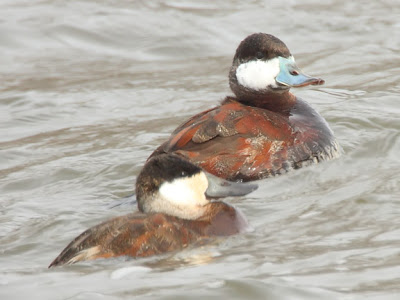 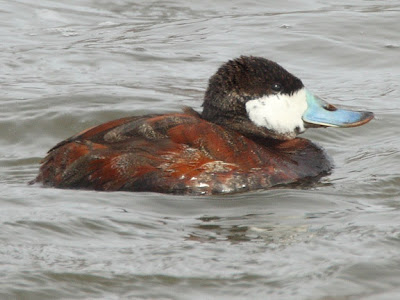 I have taken some good pics of ruddy ducks out in Montana but these were the best ones that I have been able to get in Minnesota. This past weekend I visited the park at the Coon Rapids Damn in the northern part of the Twin Cities. While there I saw another group of ruddy ducks, but they were further away and much more difficult to shoot the way that they usually are for me in Minnesota.
Posted by Ecobirder at 4:11 AM

Ooh, pretty birds. I haven't run across those before. Very nice.

I hadn't realised how similar the stiff-tailed ducks are to one another. Apart from the colour, that's very close to our (Australian) blue-billed ducks.

Scott, I have not seen many ruddy ducks either which is why I think that they are pretty cool. It does seem that we have quite a few around so far this year though.

Snail, you guys have a lot of great birds doen there. I have noticed that there are some birds that are very similar in other parts of the world from where I live. Like on the up coming IandtheBirds someone posted a bird that was very similar to what we call here a pileated woodpecker. Isn't the internet a wonderful learning tool.