On Sunday I volunteered to help out at The Raptor Center's spring open house. Despite the fact that it rained all day we had quite a good turn out. Events at the open house included programs, some kid events, a lot of displays, and we set up ringed areas outside where we brought out some of our education birds. I volunteered to do education at the hawk and falcon ring. My job was to talk about and answer questions about the birds, not really a job for me because I love to talk with people about wildlife. Here are some of the birds that we had in the circle. 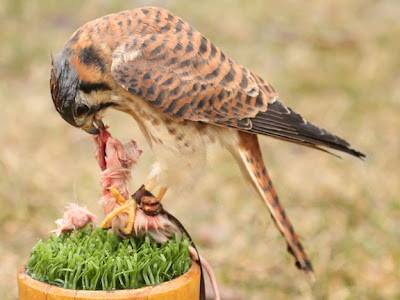 This beautiful little American kestrel female is named Cinnamon. Cinnamon is about 11 years old and came to The Raptor Center with a broken right wing. Cinnamon was enjoying a bit of rat in this picture. The birds are feed rat, mice, chicken, quail, and occasionally chicks or fish. 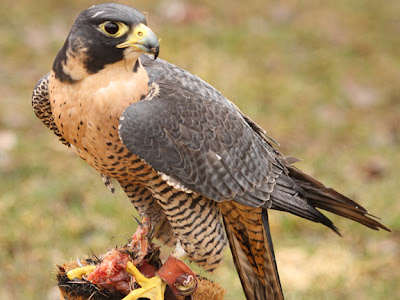 This is Artemis and she is one of four peregrine falcons that The Raptor Center has for education. Artemis can not be released because she lost a toe on her talon to frost bite. On Sunday Artemis was enjoying what looked to be a bit of quail. 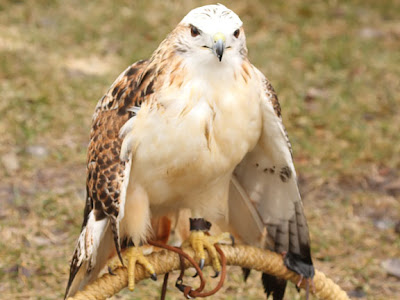 Casper is a Krider's red-tailed hawk. He was one of two red-tails that we had out in the ring the other was Jamaica but she did not really want to have her picture taken that afternoon. Casper had a broken wing, which is still very noticeable. Jamaica had a broken corocoid. Not sure what a corocoid is? Don't worry I had to look it up too. The corocoid is the bone that is the projecting part of the avian shoulder that is braced against the sternum. 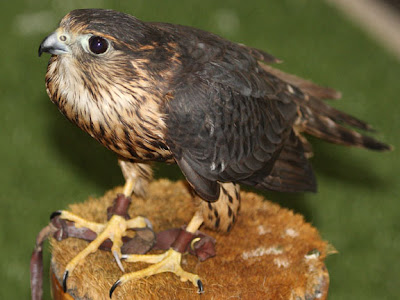 The last bird that we had in our circle was Taiga. Taiga is a 7 year old female merlin falcon, and one of my favorite education birds. She came to The Raptor Center because of a trauma injury which has affected the grasping power of her talons. Taiga is known, by most of the staff and volunteers at The Raptor Center as being an extremely slow eater. When the weather looked like it might get worse then it was, it was already pretty crappy out, they pulled Taiga and put her on display inside.

I stayed out a bit after my shift was over, since I was having such a good time, but eventually I was shivering too hard to talk effectively. It was relatively warm, especially compared to what the weather has been like so far this year, but when you are soaked with rain and are standing outside for three and a half hours you still get cold even when the temps are in the upper 40s. The staff was great, they brought out hot apple cider to help us volunteers to stay warm but unfortunately I can not drink apple cider with out shooting up my blood sugar, damn diabetes. Eventually I decided to go inside and take some more pictures. 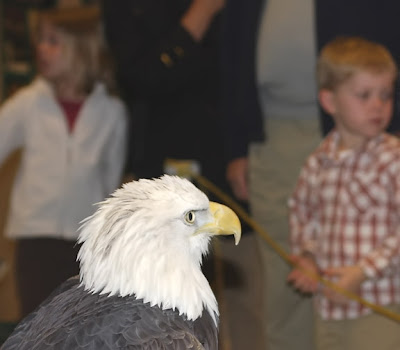 Besides the hawk and falcon ring they also had an eagle ring outside but with the weather they decided to close that ring down early and set Othello on display inside. At least I think that it was Othello, it is pretty hard for me to tell the difference between the eagle except for Maxime. Max is the only female eagle and 3 to 4 pounds heavier then all the boys, at a whopping 11 pounds. Othello is the smallest of the eagles at only around 7 pounds. He Came to The Raptor Center in 1989 with 2 broken wings, one of which had healed improperly which permanently disabled the wing. 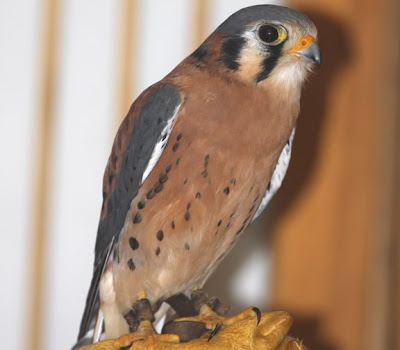 I also checked out the program that was running to get some pics. The program featured a male American Kestrel. The Raptor Center has 2 kestrel brothers Barron and Jack who are human imprints, meaning that when they were young they were raised by humans and they don't quite know how to be kestrels. I think that this is Barron but I do not really know them well enough to tell them apart yet. 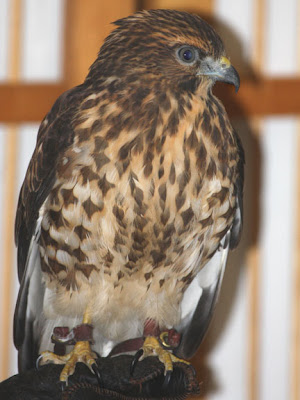 The other bird in the program was the new broad-winged hawk. This bird does not have a name but since he is the only broad-wing at the center he does not really need one. The birds do not really know or answer to their name, these birds are not pets. They are given names when we have multiple birds of the same type to help us humans to identify them. Down in the clinic the birds are only given a number for identification but for the education birds names are a bit easier when you are talking to the public. The broad-wing was shot with a BB gun when it was in the nest and still has a BB lodged in its head. The one thing that was missing from the open house this year were the owls. Most of the education owls were not available because they are currently doing programs at the Lake and Cabin Home Show which is currently down in Chicago.
Posted by Ecobirder at 2:20 PM

WOW! Those are magnificent birds!!

Thanks Mel, it really is a pleasure to be able to work with the raptors.