The Final Answer to the Quiz

The final image (E) in the quiz was kind of a trick question. This is due to the fact that it comes from the same species as the eye in image B 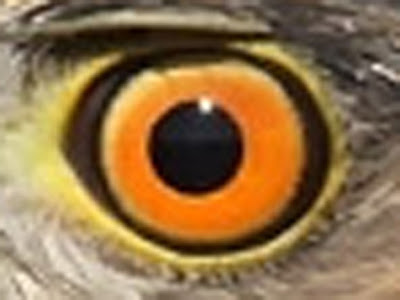 Both the eye above and the one below both belong to sharp-shinned hawks, despite the obvious difference in color. 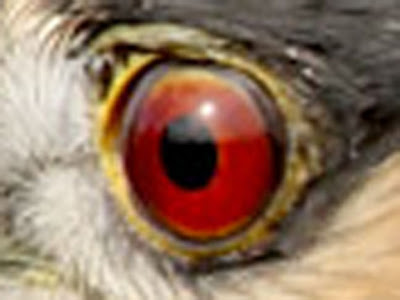 The reason for the difference is the age of the bird. Sharpies are born with yellow eyes. As the bird matures the eyes darken to red. So a first year sharpie has yellow eyes, a two year old would have orange eyes, like the one below, and a three year old or older would have red eyes like those above. 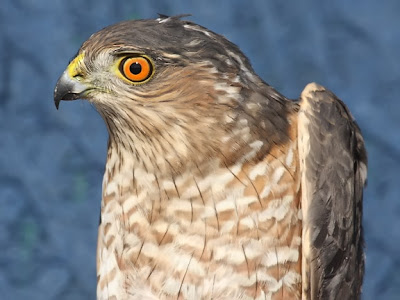 Hawk Ridge counts and bands many sharp-shinned hawks each fall. In 2008 12,608 sharp-shinned hawks were observed flying over Hawk Ridge During the fall migration. This is down from 2007, when 15253 were counted, and is below the average of the last five years of the survey, which is around 14,000. 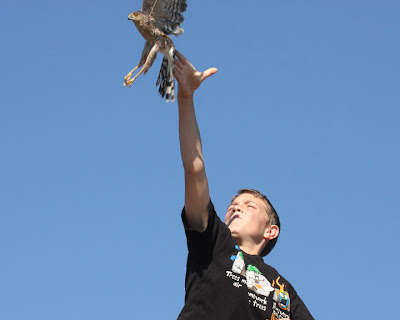 Many Ornithologists believe that the lower count numbers, at various hawk watches during the fall migration, are not so much an indication of a decreasing population for the sharp-shinned hawk as much as it is a result of more availability of food for the sharpies. The increase in available sharpie food is a result of more people taking an interest in birds and putting out feeders to attract song birds. The feeders provide food for the passerines so that they do not have to head south to find food and this in turn provides a valuable food source for the sharpies and Coopers hawks allowing them to stay further north.
Posted by Ecobirder at 2:15 PM

More good info...does the color of eyes also change in the same number of years wirh a Coopers hawk?

This whole eye series thing was very interesting..I had no clue whos eye was whos..and it was fun finding out and learning about each bird as each eye was identified.
Thanks for the great posts!
Are you on facebook? the reason I am asking is that there are a whole lot of birders there..and you can post links to your blog You really have a great birding blog!
..Kenn and Kim Kaufman are facebooking...amongst others..