The answer to number 5 (E) on the quiz, which may have been the hardest to identify was a rough legged hawk. 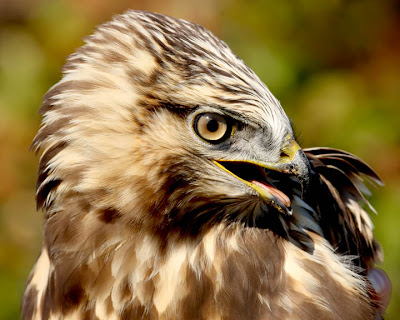 The reason why it was a bit more difficult then the others was the cloudiness at the top of the eye, as you can see here. This is the birds nictitating membrane. 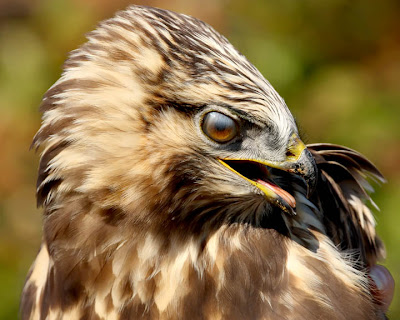 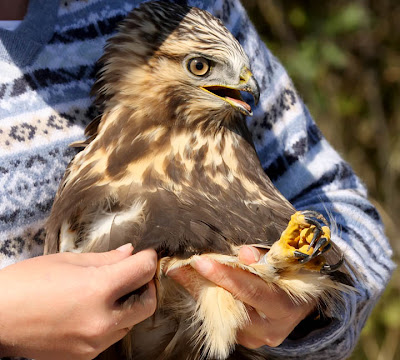 The rough-legged hawk gets its name from the fact that its feathers run all the way down its legs up to its feet. Most other hawks have scaly legs instead of feathers. The only other hawk with feathered legs that is found in North America is the ferruginous hawk, although golden eagles also have feathers down to their feet. 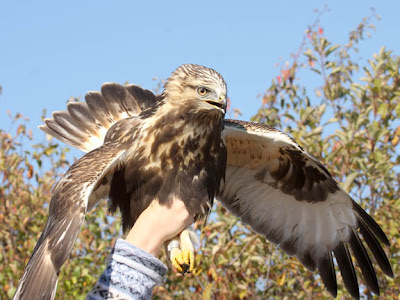 Rough-legged hawk spend their summers up in the conifer forests and tundra of northern Canada, Alaska, Siberia and northern Europe. During the winter they head south to more temperate climates where prey is more abundant. 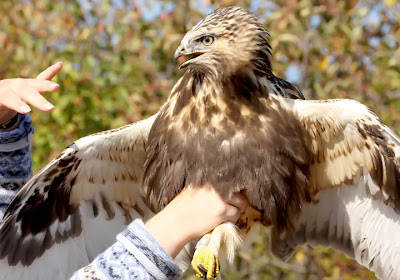 Rough-legs are similar in size to red-tailed hawks but are usually easily identified by their feathered legs. In flight, when the legs may not be visible, the rough-leg can often be identified by the black wrist patch and the thick black band on the tail which is followed by white tips, although there are a variety of different color morphs for rough-legs. 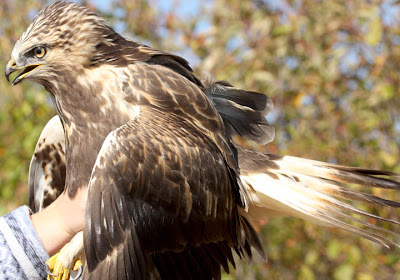 Rough-legs hunt very similarly to red-tailed hawks. Often hunting from an elevated perch at the border of an open field or hovering in the air above the field. They are looking for small rodents just like the red-tails. During the summer this is not an issue because the breeding grounds of the rough-leg is further north but during the winter, when the rough-legs are spread through out most of the continental US, except the south east corner, there is competition between rough-legs and red-tails for food. 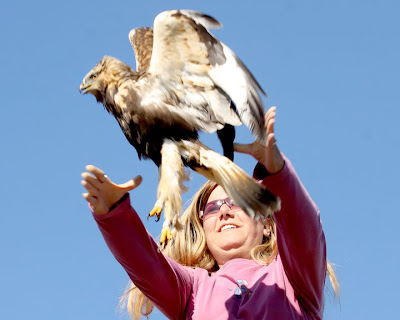 This bird, like many of the birds banded at Hawk Ridge, was adopted and then released back into the wild. Look at the face of someone releasing a bird and you can see the pure joy that this experience brings. There is nothing like holding one of these powerful and majestic raptors and then letting it go free back into the wild where it belongs.
Posted by Ecobirder at 11:55 PM

I am really loving the last photo-- the expression of joy on her face as she releases the hawk. What a wonderful feeling to set something free!

Wonderful report and series of pictures. If only all people could think that raptors are not like pests, then we will save many of them from a certain death!!

I really enjoy learning about this. I guess I had better get going in my Cornell Bird Biology course and I would know more about the birds...

Would it be possible to see the rough legged hawk in Northern California in the summer? I spotted a hawk with similar wrist blotch and wing and tail pattern that was the size of a red tail hawk.