Camera Critters: My First Butterfly of 2009 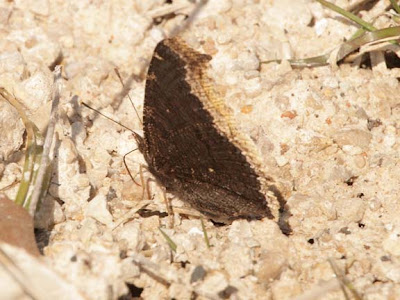 The weather was gorgeous today with plenty of sun and the temp almost reaching 60, one bank thermometer read 59, so I headed south in search of new birds that may have begun to migrate through. I spotted several new species, like northern shoveler and ring-necked ducks as well as some that I began to see the weekend before like grackles and red-winged blackbirds but the most exciting thing, for me was not even a bird. 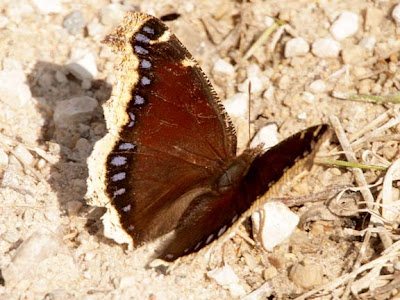 As I drove through Whitewater State Park I stopped to take some pics of a couple of immature eagles perched in the trees. As I headed back to my truck I noticed something flutter across the street. At first I thought it was a leaf but it seemed to fly to deliberately so I decided to check it out. At first it was difficult to find, as the wings were up and it looked a lot like another leaf on the side of the road, see the top pic. I probably would have missed it if it had not decided to open its wings. 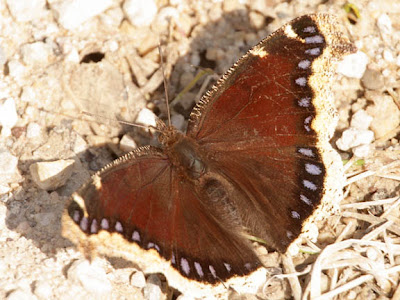 This is a mourning cloak. It is typically the first type of butterfly that we see each spring up here in the north. The reason that mourning cloaks are out earlier in the year then most butterflies is because they hibernate in their adult butterfly form. This is not common, at least not up here, where we get cold winters. Most butterflies get through the winter in one of their other three forms, egg, larva, also called Caterpillar, or pupae, also called chrysalis, but the mourning cloak produces a chemical which is like a natural antifreeze. It uses this chemical to keep it alive while it hibernates in a sheltered location over the winter.

Posted by Ecobirder at 7:42 PM

I love spring and I'm glad it's here. Blooming flowers and butterflies abound.

Awesome photo again. Hope I can snap one as nice as that when I see a butterfly next time.

Interesting about the butterfly. I have never seen one like it. I did see some sort of yellow one flit across the yard in a hurry a couple of weeks ago but it didn't linger around for any pictures. Helen

Small world. I went thru Whitewater (on the way to Wisc.) the same day. Didn't see any butterflies though.

What a lovely way to start off Spring! Love the butterflies.

It is absolutely AWESOME!!! I can not wait to see butterflies again! This one is beautiful!

That was my first butterfly of the year as well. I had seen other butterflies this year before this one but I only saw them fly by so I wasn't able to id them.