In the northern part of Minneapolis, hidden between Interstate 94 and the Mississippi River, there is a small local park called the North Mississippi Regional Park. 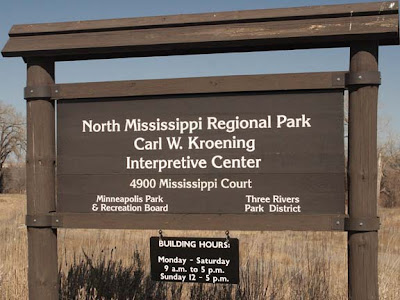 This is not a park that you would imagine that you would find a lot of serious birders. After all the park is only about 50 yards wide in many spots and the sound of cars zooming down the freeway makes it difficult to hear any birds that might be singing. 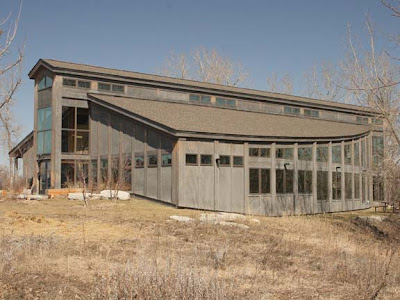 The park does have a lot of good uses though. There are a lot of nice trails for people to bike, hike, jog or walk the dog. There is also a nice visitor's center. 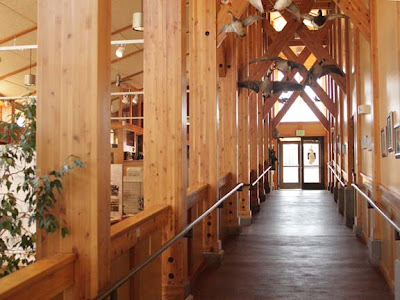 Inside the visitors center they have a lot of displays giving information about the park and some of the wildlife that you might find. They also have classrooms for education, a kids area, and the all important modern facilities. So why would a nature freak like me be hanging out in this park? 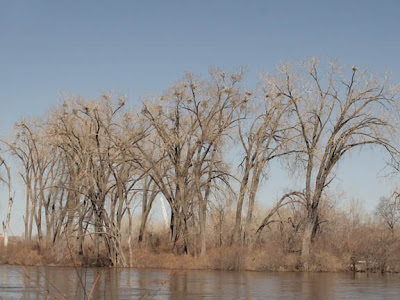 The reason sits on a small island in the middle of the Mississippi River. 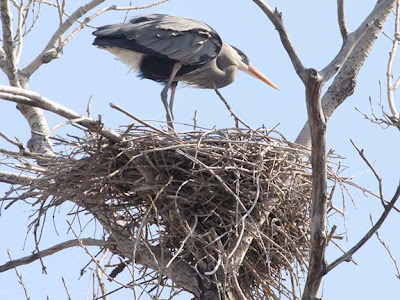 Each spring great blue herons return from their wintering grounds in the south to their rookery which is located on a small island in the North Mississippi Regional Park. 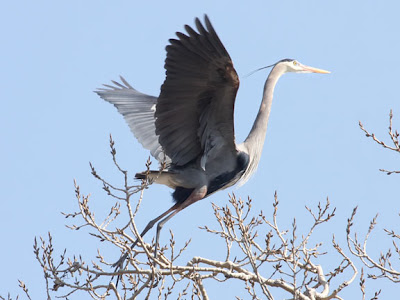 The males typically arrive first and, like most birds, they begin to look for a territory to claim. Since herons nest together in a rookery the territory that they claim will consist entirely of a nest. 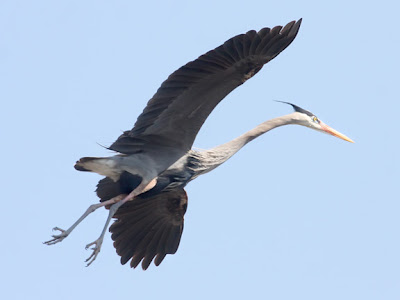 Nests are very important to the male herons because this is the best way to attract a girl. So there is often squabbles and fighting going on at the rookery in early March. 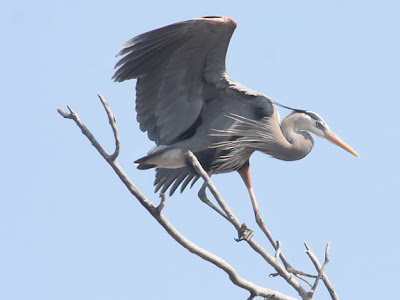 When the females arrive it is their job to pick a mate. The males try and get their attention by screaming at them and showing of their breeding plumage and their wonderful nest. The females pick a new mate every year. 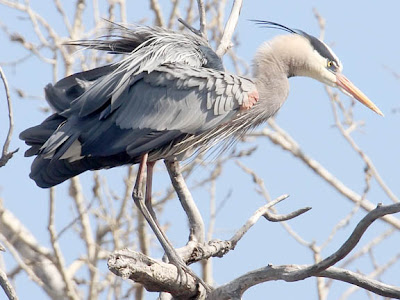 Once a pair has mated they will work together to repair the nest. The males job is to fly off and look for sticks, which he brings back to the female who uses it to remodel the nest. Sometimes they will take a break from working on the nest to consummate the pairing, but that only takes a few seconds. On my first trip to the park this year, in early March, there were only 3 that had paired up. This weekend when I visited I found that almost every nest was occupied by a pair of herons.

I can see why you like to go there..
Great..great blue heron Photos!

What incredible shots! Love the great blue heron shots, really fascinating. Would be a beautiful place to visit! Thanks for sharing a favorite part of "your world"!

These are just amazing blue heron photos. I enjoyed seeing them.

Did I hear it correctly, new mate every year?

How wonderful to have a rookery nearby. Herons are comical looking with long legs landing in tall trees. These are excellent captures. Thank you so much for sharing.

Those last two images, breathetaking.
Add to my list of birds I want to photograph.

My favorite is photo seven....looks like a piece of sculpture! Awesome photos! Thanks for sharing them!

Great shots! They don't look like they could fly :)

I think I like the roles of the male and female Great Blue Heron. You are very lucky to have this rookery so close to you. Great photos.

Those are wonderful shots of the heron. I saw some nesting for the time not that long ago. What an experience! Love that you caught them in action.

I grew up near this park. Except it wasn't a park back then. Back then, it was a neighborhood called Mississippi Court. Poor people lived there. Really poor people. A girl in my grade was one of them. A few yards from her door was a pond we called Green Lake. Lord only knows what made Green Lake green. There was a lot of industry on the river back then. Not even the bravest boys from Jenny Lind Elementary would go near it. Seems like a hundred years ago . . .

what an awesome sight these herons are. your photos capture their grace and beauty.
thanks for sharing ...enjoyed.