It appears that spring has finally arrived her in Minnesota. Technically the first day of spring is tomorrow but we have been lucky and have had spring like weather all this week. It began this weekend, both days were sunny with highs up in the mid 50s. I spent all weekend outside looking at signs of spring, like the song of red-winged blackbirds staking out their territory or the sight of eagles wheeling high above the Mississippi on their way back to nests in the north. Monday turned out to be an even better day, weather wise, with the temps getting into the 60s for the first time this year, so I decided to use some of my vacation and took a half day off of work so that I could go out and enjoy the beautiful weather. 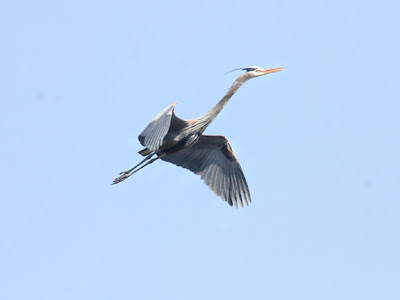 I decided to head over to the North Mississippi Regional Park in Minneapolis to look for another sure sign of spring. This park is not very large but it runs along the Mississippi River near a small island which is the location of a great blue heron rookery. Each spring the herons return here to nest, lay eggs, and raise their young. 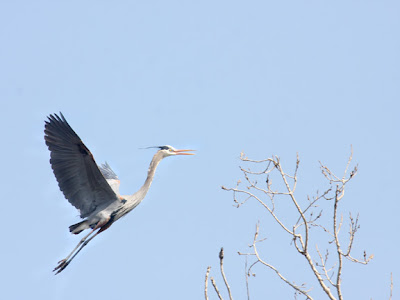 I actually thought that I might be a bit too early, since the weather had just turned warm with in the past week or so and I had not seen any reports on the local list server, but I was happy to see that the herons had already returned. 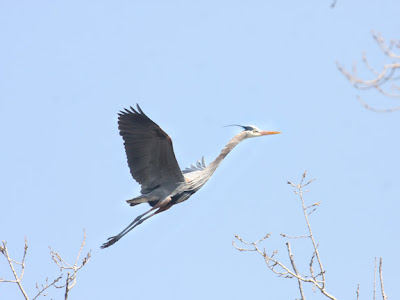 Only a few of the herons had paired up already. Unfortunately it was too windy for them to work on nest building, once they pair off the males will go out and find sticks that they will bring back to the nest and offer to the female who will use it to do a little remodeling. Most of the activity was from males fighting over nests, a good nest is a sure way to attract a female. This would occasionally lead to one of them taking off, or getting pushed off. They would then circle the island and have to fight the headwind to land in a new location which allowed me to get some nice flight shots.

Those are totally awesome shots! What magnificent heralds of spring.

Fantastic shots of an incredible bird.

Have a great weekend!
Guy
Regina In Pictures

My entry for SWF this week : in HERE. Hope you have time to visit . Thanks

Wonderful shots. I've never been able to catch a heron with my camera so I'm very impressed. ;-)

Amazing herons in flight sky shots! Wonderful that you were able to see them.

Those are wonderful shots--very cool

You are so lucky to be able to see birds like this. Truly amazing shots.

How beautiful! I'm lucky to find one sitting, much less in a beautiful flight. These shots are really great!

Absolutely adorable photos - I love herons anyway, but seeing them like this is such a pleasure.

Wonderful shots. Lots of flying birds this week. I love it. I'm so eagerly waiting for the summer and to catch a glimpse of a grey heron when I have my camera handy.

WOW! A fantastic steep take-off, I hopehe does not stall. Great shots.

This is an excellent series of shots with the head feathers trailing behind!

I envy your variety of birds so much as well as the opportunity to photograph them. Superb.

Beautiful flight shots of the heron. So graceful for such a large bird! We have a rookery near us and it is amazing to see all the nests.

Just lovely how you have captured these!

What stunning nature photos...each one a beauty.

love your blog and shots...always a pleasure to see what you will have posted.
have a lovely weekend.
erin

These are great shots! There's a blue heron nesting area about 20 minutes from here. So it's called a rookery? I learned something new today. Love that about your blog--I am always learning something when I visit. Anyhow, hoping to take the kiddos along this week to view it since they are on spring break.

Great series of the Great Blue!