MyWorld: The Tiny World of Insects.

Each week bloggers take a look at the world around them and post for MyWorld. They take pictures of marvelous places that they share with their readers, but how often, when we are looking at the world around us, do we take a step back and notice the world beneath our feet. This is a world that is full of interesting creatures, that come in many exotic shapes and colors, that many people never take the time to explore. This week we will explore a small piece of this tiny world with pictures that I took on August 28th at the Carpenter Nature Center. 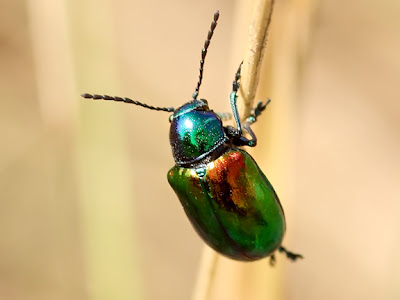 Back when I was a kid I spent a lot of time tipping over rocks and looking at beetles. Back in those days there was no Internet, computers, or field guides for bugs the only thing we had was an outdated set of encyclopedias which were very little help. Even though I could not ID them I still liked to watch them. These days with help from the Internet I can at least make an attempt at identification. I believe that this may be a dogbane beetle which is a beetle that lives in the eastern portion of North America and feeds on the leaves of plants in the dogbane family. 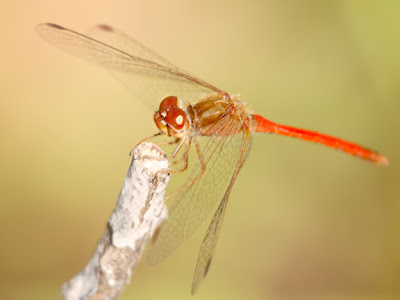 The Autumn or yellow-legged meadowhawk is easily distinguished from the other red colored meadowhawks by the fact that they have yellow legs instead of black. The Autumn meadowhawk is a late bloomer, meaning that they do not begin to mature into dragonflies until late July, so they are one of the most common dragons that are still seen in October and even early November depending on the weather. 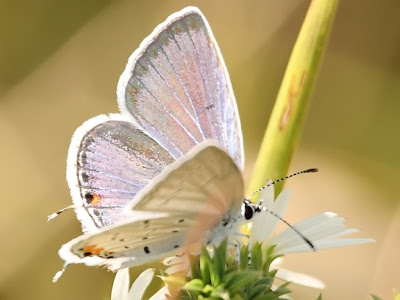 The eastern tailed-blue butterfly is a very small butterfly that is often over looked. They look similar to their cousins the western-tailed blue but the eastern version usually has two orange spots on the wings. On this example it appears that the second orange spot on the far wing has been worn and lost much of its color but it definitely has two spots on the bottom of the near wing. 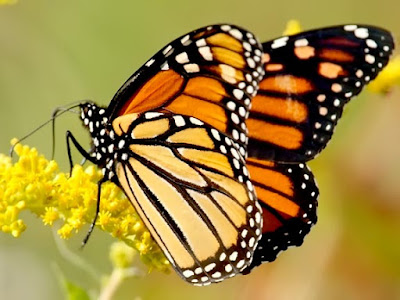 The monarch butterfly is the most recognizable butterfly in North America, and perhaps maybe even the entire world. The Caterpillar of the monarch feeds exclusively on members of the milkweed family, which makes the monarch toxic to most predators. 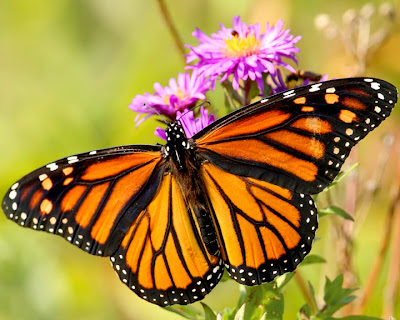 Many people are aware that monarchs, like birds, fly south for the winter, however this is not true for many monarchs. In the northern portion of North America we typically see two broods of monarchs each summer. The first brood of the summer are the offspring of monarchs that hatched in the south. They intern will produce a brood that will migrate south and then they will die. It is the second brood that we gather together in September and fly down to wintering grounds in Mexico or southern California. At the wintering ground they gather together and go into a hibernated state until the spring. When they wake up from hibernation they lay their eggs and then die and this is how the species continues. 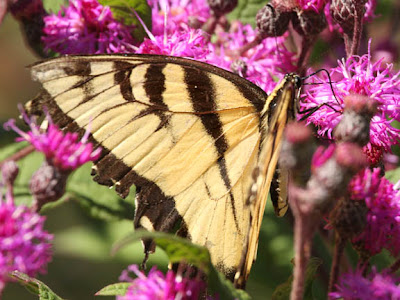 I believe that this butterfly was an eastern tiger swallowtail but it is difficult to be sure since most of the edges of its wings are missing. The other option would be a Canadian tiger swallowtail, Carpenter Nature Center is with in the range of both versions, which has a continuous yellow band on the edge of the fore wing. There is also a black form of the female tiger swallowtail that looks very similar to the black swallowtail. 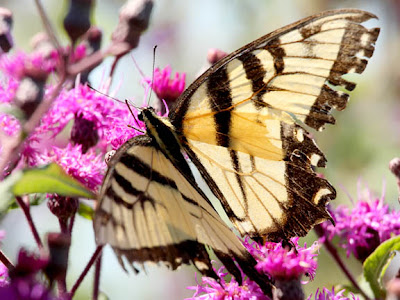 So if you are lucky enough to live in a place where it is already warm enough for insects to survive take a look at the flowers, in the long grass, at the local pond or under a rock because you might find something really cool and interesting to look at. For those of us up here in the north we will still have to wait and be happy just to look at pictures.

Fabulous colors, I love all your work, thanks for sharing.

I can only echo what Guy has said. Your photos are exquisite and a wonderfully informative post. Thanks for sharing. Enjoy your week.

Great post great photos so much information. I am trying to entice some Monarchs to my garden I have planted a swan bush which they feed on. We had one in our garden as a child and I remember watching the butterflies emerge from their cocoon.

It’s so nice site. We love to see more on this site. Keep on updating… MonkAreYou Bali *hfgfgg

Oh nice selection of insects. I can't wait to get out and find some for myself when it warms up...

Those are beautiful pictures. We have some green beatles here called June bugs. We used to play with them when I was a youngster. Helen

These are heavenly. Info and images so intricate.

Stunning images! I love the photo of the beetle but DON'T like it on my roses!!
I am in AZ and always looking down at me feet..the desert shows me much!sun gazing and looking down!

Great close up shots! Thanks for taking us through their world and for all the info. I especially love the beetle. :-)

Absolutely beautiful captures of things that are sometimes overlooked and have extreme beauty of their own. I saw (and photographed) my first bug of the season yesterday, a ladybug.

really beautiful creatures you got there:) They are just so colorful.

How interesting to look at the small world of insects. Great photos.

You are so right. The insect world is a constant source of amazement to me and I cannot wait for the summer with my new effective lens to start photographing all these wonderful creatures. Your captures are awesome.

Wow i love these photos

Great shots! I too spent a lot of time turning over rocks. Still do!

fascinating and very informative post...enjoyed it very much.
thanks for sharing.

have a great week.

I really like the irridescent colours of that beetle!! And I love dragonflies, even though I do not know onr from another.
Thanks for the education!